While AMD stated that this 6nm SOC was focused on mainstream notebooks, there were hopes that the SOC could become the chipset behind a series of Steam Deck rivals, handheld gaming PCs that could rival Valve's handheld within the portable gaming PC market. AYANEO's recent reveal of their Mendocino-powered $289 Air Plus raised these hopes further. Sadly, these hopes put overly high expectations on AMD's low-cost laptop SOC. 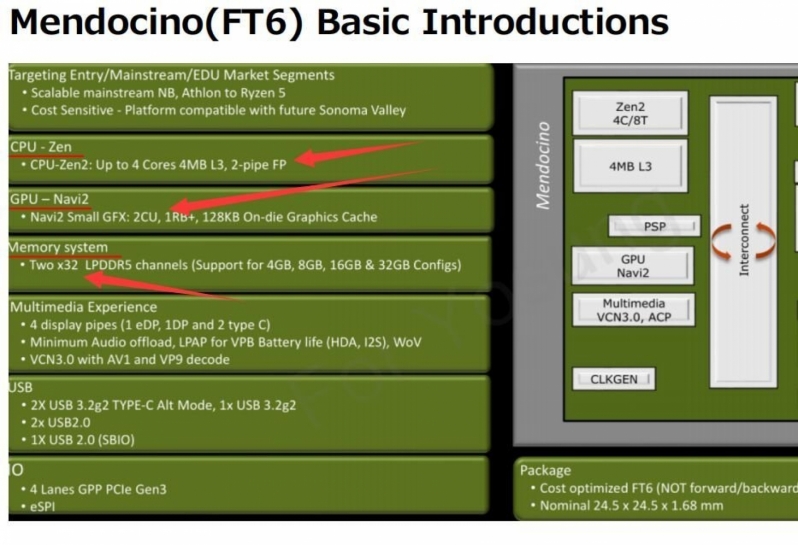 While AMD's Mendocino APU may not be a mobile gaming powerhouse, it will have the media playback capabilities of other RDNA 2 based integrated GPUs. This integrated GPU should be powerful enough to run some older PC games, but it is by no means a competitor to Valve's custom AMD Steam Deck SOC. Mendocino would be better used alongside a streaming service like Xbox Cloud Gaming, or Geforce Now to deliver a solid gaming experience.

You can join the discussion on AMD's leaked Mendocino APU Specifications on the OC3D Forums.

meuvoy
I'm really not very familiar with AMD's mobile APU specs but I still think this should be better at gaming than a 5700U? That would mean cheapo laptops would be capable of playing older games? I mean, if I can play Bioshock Infinite @1080p 60fps I might just pull the trigger on my first laptop ever.Quote

ET3D
The really big surprise here is "2-pipe FPU", which suggests something like Bulldozer.


Quote:
No, it would be much worse. The 5700U has 8 CUs, and while they use the Vega architecture, which is weaker than RDNA 2, 2 CUs in Mendocino would at most equal 3 CUs of Vega.Quote

... Then this will basically be the equivalent of the modern Intel Celeron/Pentium CPUs a hard pass by default.Quote

demonking
I still have hopes, it shows in the screen shot "scalable, Athlon to Ryzen 5"
We will most likely see bigger on some Ryzen 5's and 7's
All the new desktop variants are rumored to have RDNA chips so i expect AMD will bring out a "gaming" chipQuote
Reply