Ever since AMD announced Zen 2, we've been talking about its implications for Threadripper. How could we not? AMD's new chiplet-based designs mitigate all of the major shortcomings of their 1st and 2nd Generation offerings, making 3rd Generation Threadripper CPUs better than their predecessors in every tangible way.

How could we say this without testing? The simple answer is that we have already seen what Zen 2 has done for both AMD's Ryzen and EPYC lineups. We have seen AMD increase their CPU clock speeds, IPC and memory performance with Zen 2, giving us a sense of confidence that our Threadripper predictions are correct.

Alongside this, AMD has revealed their new TRX40 platform, which ships with PCIe 4.0 support and access to a total of 72 PCIe lanes. These are not "platform PCIe lanes" that are squeezed through a smaller DMI link, these are proper PCIe lanes, granting 3rd Gen Threadripper users access to a staggering amount of bandwidth. 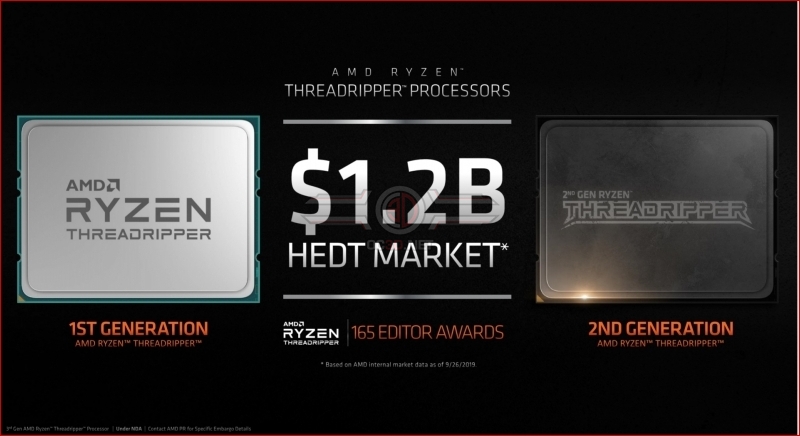 With price tags fo $1399 and $1999 respectively, AMD's 3960X and 3970X processors are by no means cheap. Even so, AMD has told us that they will deliver users some huge generational performance boosts. Just look at the clock speeds alone, AMD's 32-core Threadripper 2990WX offers a base clock speed of 3GHz, and a boost clock of 4.2GHz, whereas the Threadripper 3970X offers base/boost clock speed increases of 700MHz and 300MHz respectively. Combine that with an IPC boost and 3rd Gen Threadripper will deliver users some tremendous performance gains.

Combine this with AMD's new multi-die architecture, which unifies Threadripper's memory and I/O into a single chip. This grants all Threadripper CPU cores equal access to all of the platform's DDR4 memory DIMMs, which wasn't the case with older Threadripper CPUs. This allows 3rd Generation Threadripper CPUs to act as a singular processor, rather than a dual-CPU system in many workloads, generating huge performance gains over a wide number of workloads.

When speaking to AMD, generational performance gains from the Ryzen Threadripper 2990WX to  the 3970X of 40-60% are not uncommon. Even higher gains were said to be possible in specific workloads. This likely refers to the applications that failed to utilise older Threadripper processors properly. 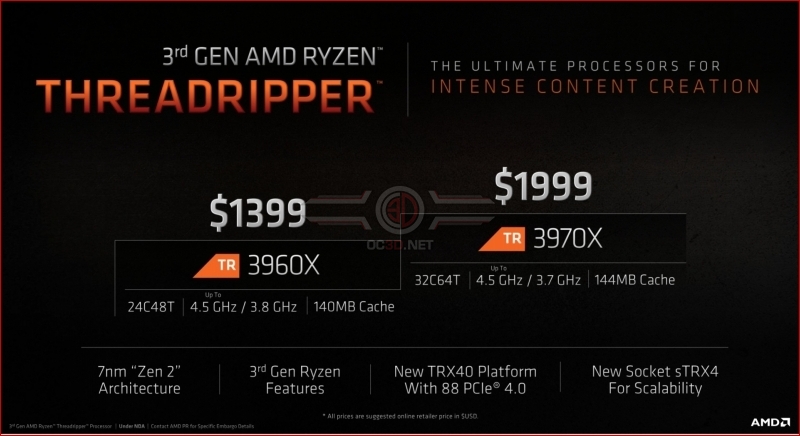 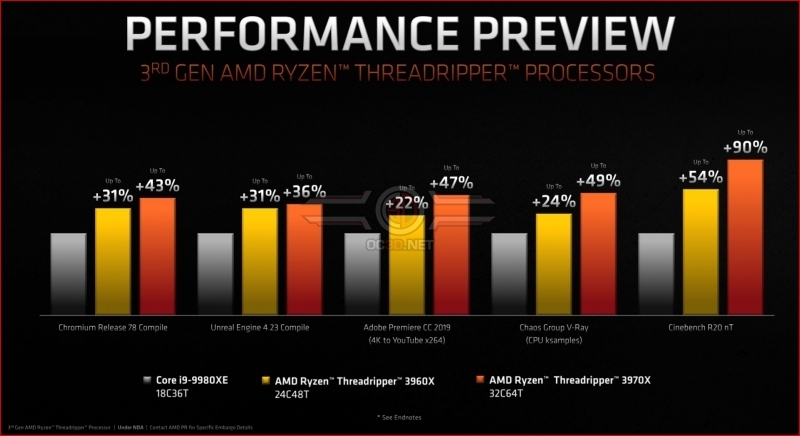 The TRX40 platform will ship with support for ECC memory, though support will be available on a motherboard-by-motherboard basis, offer support for 88 total platform PCIe lanes (72 full PCIe lanes) and not be backwards compatible with older Threadripper processors.

AMD's new TRX40 platform will support the same cooling solutions as X399, though it is worth noting that Threadripper 3rd Gen CPUs have a higher TDP than many of AMD's older Threadripper processors. 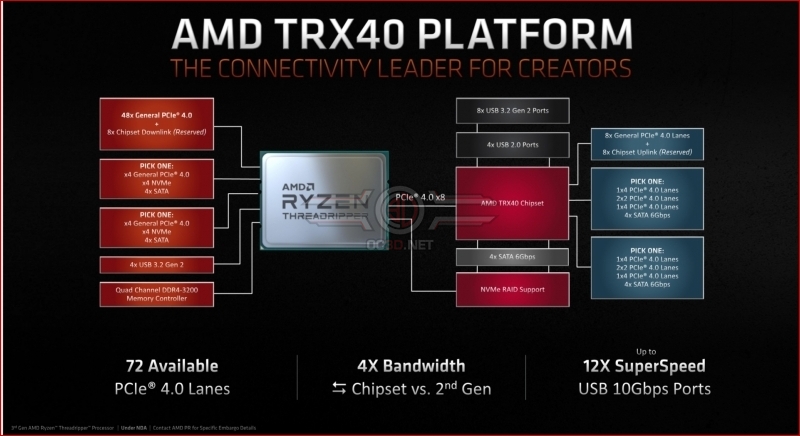 You can join the discussion on AMD's Ryzen 3rd Generation Threadripper processors on the OC3D Forums.

AlienALX
Any one got three grand they can loan me?

Bartacus
In about 2 months, you'll be able to get smoking deals on previous gen TR, so you won't need 3 grand.

I *almost* bought one, but I couldn't find anyone interested in my 3900X CPU / mobo. The previous gen 24 core is on sale right now for less than $1300CDN, ~$500CDN for a board. Still not cheap, but considering what you get, it's almost a steal.Quote

I don't expect there to be cheap budget TR boards, but it's that and their insistence on using fast RAM that has stopped me jumping in.Quote

NeverBackDown
Surprised we didn't talk about the fact that they are the first to quadruple the bandwidth between CPU and chipset. Went from PCI e 3.0x4 to PCIe 4.0 x 8. Allows for so much more devices to be attached and far more flexibility for storage or similar things.Quote
Reply