What do you think AMD's spending their money on?

2021 has been a great year for AMD, with the company seeing growth in all areas of its business and Q2 giving the company a 99% boost in revenue over this time last year. AMD is now a wealthy company, and that is reflected in the silicon giant's R&D spending.

In Q2 2021, AMD has spent $659 million on Research and Development, representing an almost 43.3% increase in the company's spending. This highlights how AMD is investing in its future, and it's a clear sign that they are using its newfound wealth to push its technology further.

Research and Development is the lifeblood of all technology companies. While AMD was able to produce Zen and RDNA were created on shoestring budgets, the company's leadership knows that it needs to increase its R&D budget if it wants their success to continue. AMD is diversifying, and that diversification will require increased spending.

AMD has split its graphics roadmap into gaming-focused and data centre-focused segments in recent years, creating their RDNA 2 and CDNA architectures. With this shift, AMD plans to become more competitive within both of these markets, hoping to deliver its customers more value while increasing its total GPU sales. Further diversification will happen in the future, especially after AMD's merger with Xilinx becomes finalised.

The PC market is growing, and AMD plans to outperform the market by releasing more and more advanced products to the market. AMD wants to gain market share and take advantage of the growing PC and gaming markets, which means that AMD should be expected to continue increasing its R&D spending as its revenue continues to grow.

AMD's main concern is to ensure that its success continues in the coming quarters, which means that the company cannot allow its R&D efforts to fall behind. AMD needs a strong hardware roadmap to continue competing with Intel and Nvidia, both of which can outspend AMD. Strong IP and continuous generational improvements will help AMD to continue its positive growth. Still, as its CPUs and GPUs become more complex, more and more effort will be required to continue pushing the performance envelope. 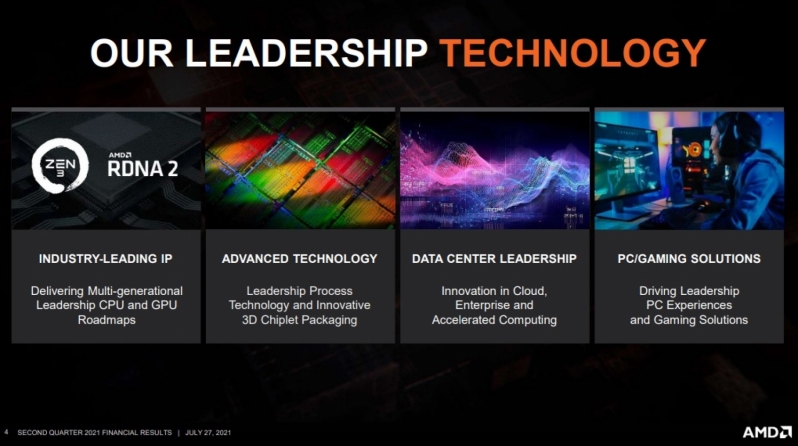 In Q2 2021, Intel's earning report claimed that the company spend $3.715 billion on research and development during the quarter, more than 5.5 times what AMD spent on R&D. Even now, AMD's R&D spending is a fraction of their competition's, making it critical that AMD allocate their resources correctly and make the right technological bets in the coming years.

You can join the discussion on AMD's rising R&D Budget on the OC3D Forums.

ET3D
Intel having its own fabs means that a lot of its R&D budget goes into fabrication technologies, packaging, etc. TSMC spends about $1B a quarter on R&D, as a point of comparison, and Intel might be spending more. Intel also has an FPGA division, which would be equivalent to AMD adding the Xilinx R&D expense ($200m+ a quarter). Intel's R&D is also working on self-driving cars....

In short, AMD's R&D is a lot more focused, so isn't comparable to Intel's. It's definitely possible that Intel is putting more into CPU and GPU tech than AMD, but not to the extent that a basic comparison of R&D expenditure will suggest.Quote
Reply