AMD has only just launched their Zen 4 based Ryzen 7000 series, and many hardware enthusiasts are already discussing what's coming next from AMD. AMD's launching their Ryzen 7000 series without using the company's 3D chiplet technology, leaving room for AMD to release enhanced Zen 4 processors at some point in the future.

AMD's Ryzen 7 5800X3D utilised 3D chiplet technology to stack an additional 64MB of L3 cache onto AMD's Zen 3 CPU chiplets, enhancing gaming performance (and some productivity workloads) by allowing more data to be accessible on-chip. With Zen 4, we already know what AMD has plans for V-Cache, as AMD has already confirmed that Zen 4 based Genoa-X processors with 3D V-Cache are on the horizon.

The hardware leaker @greymon55 has teased AMD's plan to reveal three V-Cache enhanced Ryzen processors at CES 2023. These processors are the Ryzen 7 7800X3D, the Ryzen 9 7900X3D and the Ryzen 9 7950X3D (assumed product names based on AMD's Ryzen 7 5800X3D). As their names imply, these processors will offer PC gamers 8-cores, 12-cores, and 16-cores respectively. 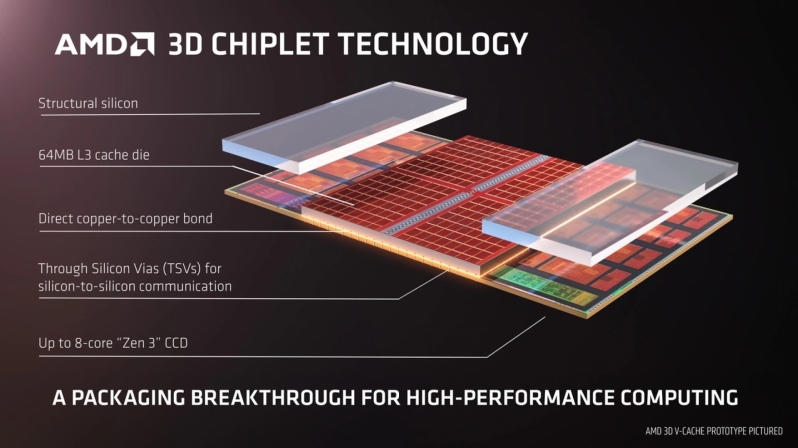 While AMD's Zen 4 architecture has enabled huge performance gains in gaming workloads, AMD has its 3D V-Cache technology up its sleeve to push things even further. Expect to see enhanced Zen 4 processors sometime in 2023.

You can join the discussion on AMD's rumoured Zen 4 V-Cache enhanced processors on the OC3D Forums.

AlienALX
So in other words don't buy now. Especially with DDR5 prices.

I thought they said they were going to do DDR4 boards?Quote

NeverBackDown
Upgrade in 6 months sounds like you may as well wait. As alien said you'd probably end up saving money by waiting while getting more performanceQuote

Dicehunter
I personally wouldn't buy anything AM5 related for another year at the very least, DDR5 prices are still way too high and with this being AMD's first DDR5 platform, 1st gen buyers will be beta testers.Quote

AngryGoldfish
Quote:
Don't get me wrong, you could be right, but I personally think this prediction is a bit blown out of proportion and not really that well-founded. Just because Zen 1 had these issues doesn't mean Zen 4 will. AMD have had a long time with the Zen architecture and its different versions, and so have software and hardware developers. They didn't have the infrastructure, finances, or time back thenbut they do now. Adding to that, DDR5 has already been out with seemingly no major issues on Intel's Alder Lake platform.

I remember part of the issue people were having with motherboards on Zen 1 was because motherboard manufacturers had no real idea whether it was going to be a success. They didn't want to invest endless hours fixing bugs for a platform that might fail. Same goes for the RAM. DDR5 has been out a while now, and RAM developers recognise that AM5/Zen 4 will be one of their biggest sellers of DDR5 modules over the next few quarters. That tells me they'll be doing everything they can to fix bugs now before the release, and quickly after the release once they crop up. Zen 4 is a major release, far bigger than Zen 1. Far more money is involved.

DDR5, the new AM5 socket, the new chipsets, they're not widely different designs to what was before. I personally think the teething problems will be fewer than with Zen 1 and not take a whole new revision to resolve as with Zen+ or Zen 2. But that's just my prediction.Quote

If your PC died, or just doesn't perform as well as you need it to you go to the store and pick the parts that fit in your budget. Maybe you can hold it for a short time (same as No.2). For PCs it is not more than a month or two.Quote
Reply