Rumour has it that AMD has a 10-core Ryzen processor in the works, a CPU which will act as a direct core-to-core competitor for Intel's i9-10900K. This innovation will come through AMD's Zen 3 architecture and Ryzen 4000 series of desktop processors, which will offer AMD new segmentation options.

Today's Zen 2 powered Ryzen 3000 desktop processors are comprised of eight core CPU chiplets, allowing AMD to create AM4 processors which feature up to 16 total cores. These eight core chiplets are further divided into two quad-core CCX complexes. With all Ryzen processors, AMD segments their products by disabling cores within these CCX complexes, but each CCX must feature matching core counts to operate correctly.  The only exception to this rule is the Ryzen 3 3300X, which disables a full CCX on its 8-core chiplet to offer four cores and eight threads on a single CCX.

AMD's Ryzen 3000 series of Zen 2 desktop processors cannot be created with ten cores. That's why AMD jumps from eight cores to twelve cores when moving from their Ryzen 7 3800X to their Ryzen 9 3900X. This will change with Zen 3, as AMD's eight-core chiplets will move from having a dual quad-core CCX structure to having an 8-core CCX structure.

With Zen 3 AMD Ryzen processors having an 8-core CCX structure, it will become possible for AMD processor lineups to feature 10-core and 14-core models. This will grant AMD more segmentation options, while also allowing AMD to remove the inter-CCX latency barriers within their 8-core Zen chiplets.

The possibility of a 10-core Zen 3 processor was discovered by @1usmus (the creator of the Ryzen DRAM calculator) on Twitter, who found several references to Zen 3 within AMD's AGESA 1.0.8.1 code. 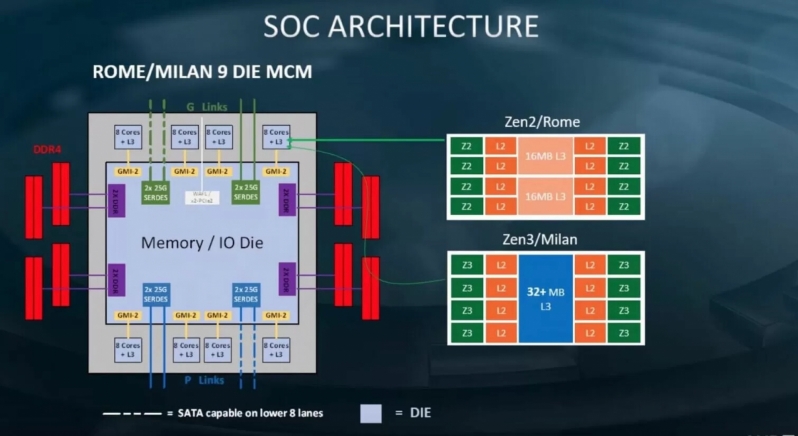 You can join the discussion on AMD's Zen 3 lineup possibly featuring new 10-core and 14-core models on the OC3D Forums.

Giggyolly
Meh, not sure I see the point, just go with 12Quote

For example, AMD's Ryzen 7 3700X and 3800X. All that differentiates them is a few hundred MHz in clock speed.

looz
Quote:
Depending on the CCX layout, this 10/20 layout might be just as good for gaming.Quote
Reply