AMD's Ryzen Mobile Lineup is getting a boost for 2022

Ahead of their CES 2022 reveal, AMD's Ryzen Mobile 6000 series lineup has been leaked, highlighting new H-series and U-series SKUs and many of AMD's new Ryzen 6000 series laptop features.

The majority of AMD's new Ryzen mobile CPUs will be based on the company's Rembrandt silicon, which will arrive under Ryzen 6000 series branding. That said, some refreshed Ryzen 5000-series Cezanne CPUs will also be available with Ryzen 5X25U series branding.

According to the leaked images below from Videocardz, AMD's RDNA 2 based integrated graphics solutions will feature up to 12 compute units that can clock as high as 2.4GHz. Add on support for DDR5 and LPDDR5 memory support, and AMD's Ryzen 6000 series laptops should feature the graphics prowess and memory bandwidth needed to play most modern games. This is especially true for older titles.

With their Ryzen 9 6980HX, AMD's Ryzen mobile silicon will deliver boost clock speeds as high as 5.0 GHz, which is a first for Ryzen. If this is what Ryzen mobile can deliver in 2022, we can't wait to see what AMD's future desktops will offer.

Sadly, we do not know what enhancements AMD's Zen 3+ CPU cores offer, aside from heightened efficiency, DDR5 support and clock speeds thanks to TSMC's 6nm lithography node. AMD may discuss Zen 3+ in more detail soon, though we do not expect major IPC leaps from the architecture. 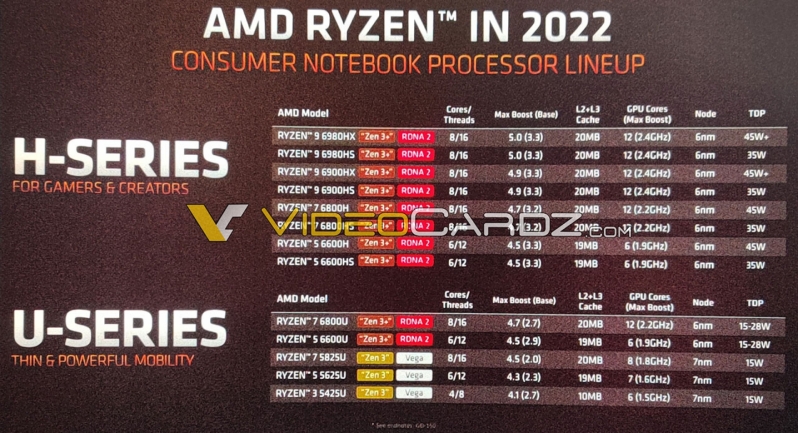 One of AMD's 2022 Ryzen mobile highlights is the company's additional platform features, which include AV1 decoding support, PCIe Gen 4 support, USB 4 (40Gbps) support, Wi-Fi 6E compatibility, HDMI 2.1 and DisplayPort 2.0 support and support for HDR screen types that include OLED, Mini-LED and more. AMD's latest laptop CPUs are capable SOCs, and AMD's increase focus on platform features is eating away at many of Intel's marketing points.

When comparing U-series SKUs, it is clear that AMD's new Ryzen 6000 silicon will offer much higher performance levels than their Ryzen 5000 series predecessors. AMD's new CPUs have higher base and boost CPU clock speeds, and deliver users an even larger leap in iGPU performance. That said, AMD's Ryzen 6000U series CPUs can feature higher power targets of 28W, which could account for these clock speed increases.

You can join the discussion on AMD's Ryzen 6000 series mobile CPUs on the OC3D Forums. 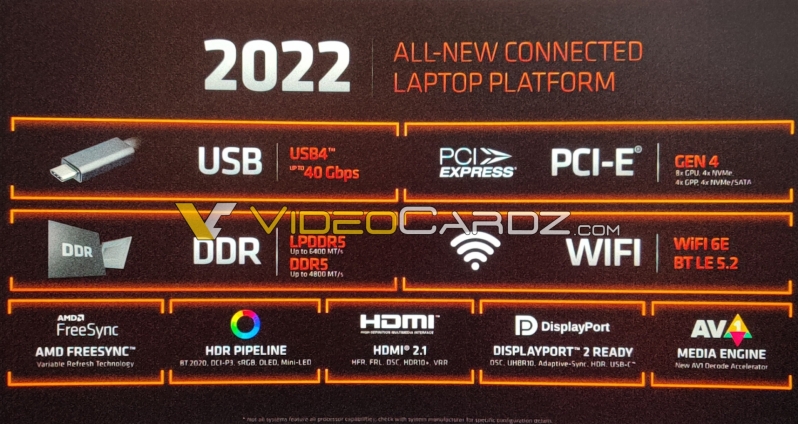