AMD's Ryzen 7 5800X3D has been benchmarked on Geekbench

V-Cache is not universally beneficial to PC users

While AMD's 3D V-Cache technology is impressive, it comes with a few downsides. For the Ryzen 7 5800X3D, the addition of V-Cache has forced AMD to lower the base and boost clock speeds of their V-Cache enhanced CPU over its standard counterpart, resulting in lower performance levels in many workloads. This is clearly showcased in Geekbench, where Ryzen 7 5800X3D results have recently appeared.

When comparing AMD's Ryzen 7 5800X3D results with the company's Ryzen 7 5800X, we used performance data that uses the same build of Windows 11, the same DDR4 memory speeds/configuration and the same motherboard. As many variables as possible have been eliminated and our comparison data appears to come from the same source. The only thing that changes with this data is the processor.

Moving onto multi-threaded performance, we see a 3.6% performance advantage overall for AMD'[s V-Cache enhanced Ryzen 7 5800X3D. Diving deeper into the data, we can see performance losses in some tests (all below 10%), and performance advantages as high as 63% (Speech Recognition Test) in others. The benefits of V-Cache are workload-specific, which means that some users a better off buying a processor without V-Cache. 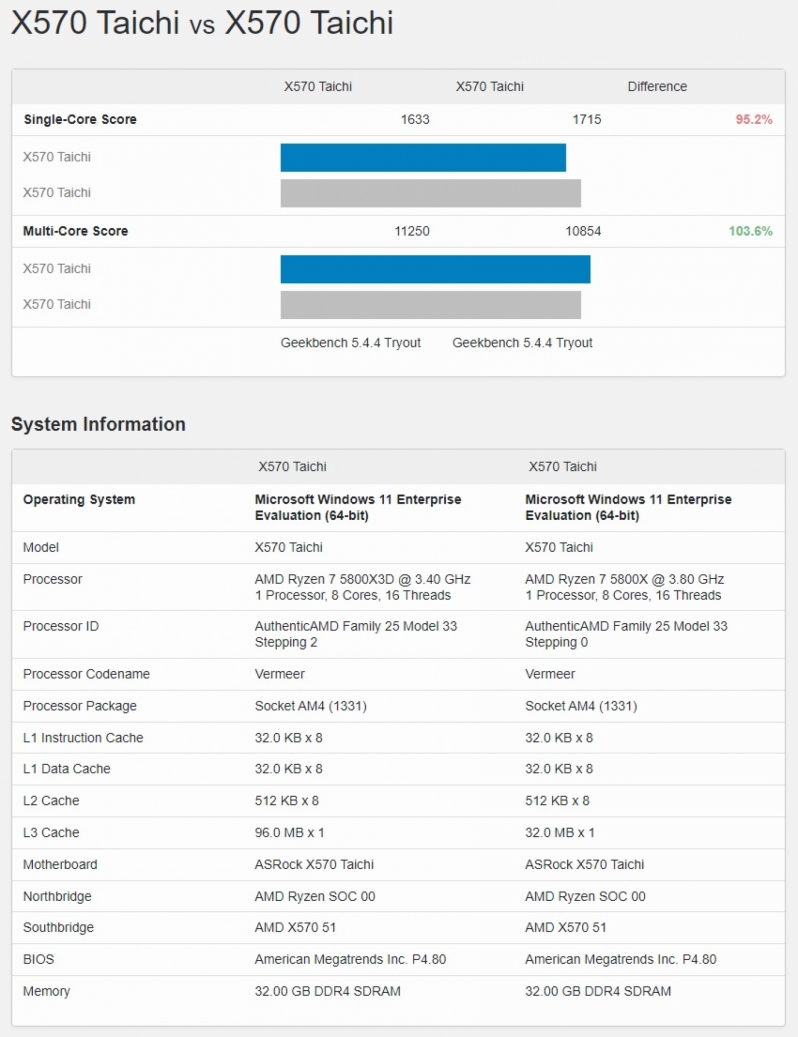 With AMD's Ryzen 7 5800X3D costing $450 in the US, many PC builders will have a choice to make if they create an AMD-powered system. Should they get an 8-Core Ryzen 7 5800X3D with V-Cache, or go for a Ryzen 9 5900X 12-core CPU without V-Cache. The answer to this question is not simple, and depends on if your workload would benefit more from additional cores or additional cache.

V-Cache is not a magic bullet that will make all workloads run faster. However, some workloads will benefit greatly from V-Cache, and when gaming is one of those workloads, the Ryzen 7 5800X3D will be an excellent product for many PC builders. That said, many other PC users will be better off saving money and getting a Ryzen 7 5800X, or buying an AMD CPU with a higher core count, like AMD's Ryzen 9 5900X.

You can join the discussion on AMD's Ryzen 7 5800X3D's interesting Geekbench results on the OC3D Forums.

KingNosser
The price difference has 5800x or 5700x written all over it, i can only feel that this was a test of things to come more than anything else. Either way coming from a 1700 this will be an upgrade

Dicehunter
Not exactly impressive but any gain is always a good thing.Quote

NeverBackDown
Gotta wait until we see how it performs in real applications and not synthetic tests.

Still if it's the same costs as a 12 core Ryzen CPU I would still think the 12 core is better value currently without reviews to test this.Quote

Gothmoth
I don´t have much trust in Geekbench.


And in this case i have no idea how cache dependend Geekbench is.Quote
Reply