Videocardz has stated that Materiel's pricing is higher than most other European retailers, which means that the pricing listed in the image below should be taken with a grain of salt. Some sources have also stated that AMD plans to decrease the pricing of its existing Ryzen 3000 series models to create a place for these new SKUs. This will also make AMD's existing offering more compelling when compared to Intel's latest processors. Videocardz has also reported that AMD's Ryzen 5 3600XT will cost $28 more than AMD's Ryzen 5 3600X.

Combine this with the release of AMD's mainstream B550 chipset, and this could add even more value to the mainstream CPU market, a factor which will only serve to increase AMD's sales further within the mainstream market. 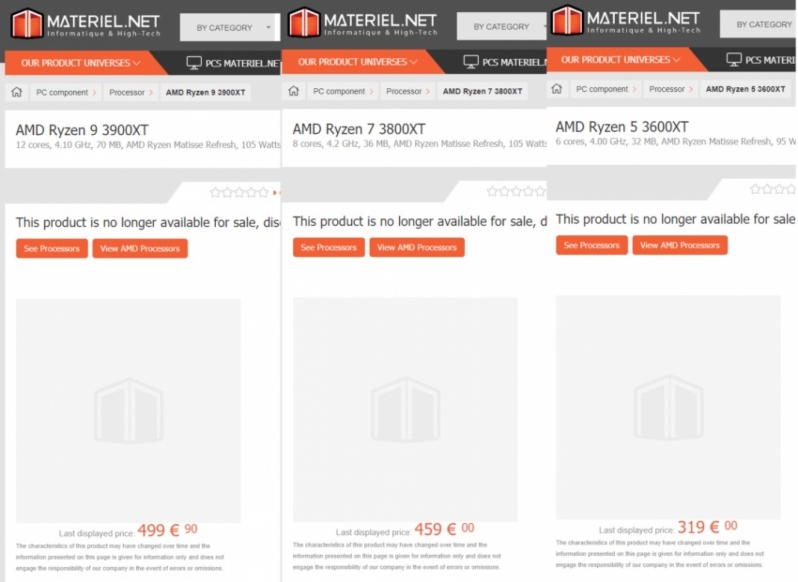 Giggyolly
-They're going for a 7/7 launch.

-they're coming in at the same RRP as the "X" models launched at last year.Quote

Avet
Both Intel and AMD are cheating with their "max boost". CPUs are tuned to burst just before executing a task so that you see the reported frequency. Rest of the time they are on much lower frequencies. I hope these ones can sustain much higher clocks.Quote

Avet
Quote:
Not what I meant. For example if you look at single-threaded task graphs CPUs will boost to max (4.6 AMD, 5.3 Intel) for a fraction of the second, just to say they did it and then continue executing tasks at a much lower speed.

Edit: Here is the image. No actual work was done at the advertised frequency. Just a bit boost before and after so that HW Info could repot max frequency of 4.6. And single-threaded tasks are executed at 4.3-ish GHz.

looz
I see, I fully agree id the window is literally exactly or under a second. I thought it lasted a bit longer, in 10 second range, where it could kick in for the brief periods when GPU no longer was the limiting factor.Quote
Reply