According to the Weibo user Venom Warlock Marvin, as reported by @9550pro on Twitter, AMD's Ryzen 9 7950X processor will ship with clock speeds that can boost up to 5.85GHz, the processors rumoured Fmax frequency.

AMD's Ryzen 9 7950X is AMD's flagship Zen 4 processor, offering users sixteen cores across two 5nm chiplets. The CPU is reported to have a 5.7GHz boost clock speed on its specifications sheet, though higher speeds are said to be possible on retail silicon, even without overclocking. That said, clock speeds above this are said to be momentary.

In the CPU-Z screenshot below, we can see that AMD's 16-core Ryzen 9 processor has 64MB of total L3 cache, support for AVX-512, and is running at 4.85GHz during an unknown workload. 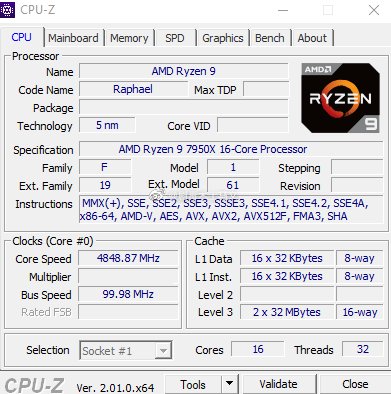 You can join the discussion on AMD's Ryzen 9 7950X processor on the OC3D Forums.