AMD's moving to 6nm, and that will bring big changes to their mobile lineup

@Broly_X1 noted that his roadmap is outdated, stating that AMD's Van Gogh APU is "dead", which means that AMD has likely cancelled the product. With 7nm wafers being in short supply, AMD has probably allocated its limited 7nm silicon supply elsewhere, to markets where AMD can generate larger margins.

While AMD's Van Gagh APU is reportedly cancelled, the same cannot be confirmed for AMD's Dragon Crest APU, which appears to use an updated version of AMD's Van Gogh silicon. Van Gogh and Dragon Crest are designed to operate at low wattage ranges, making them suitable for low power devices like Microsoft's Surface Tablet series and other premium small form factor systems.

Typically, AMD reveals new Ryzen Mobile products at CES, making it likely that AMD will reveal Rembrandt and Barcelo in January 2022 at CES 2022. At this time, it is unknown how well AMD will be able to compete with Intel, who plans to release 16-core (8 Big Cores + 8 Small Cores) Alder Lake processors later this year. Mobile Alder Lake processors could out-compete Rembrandt, as Zen 3+ only promises to deliver minor performance improvements over today's Ryzen models. 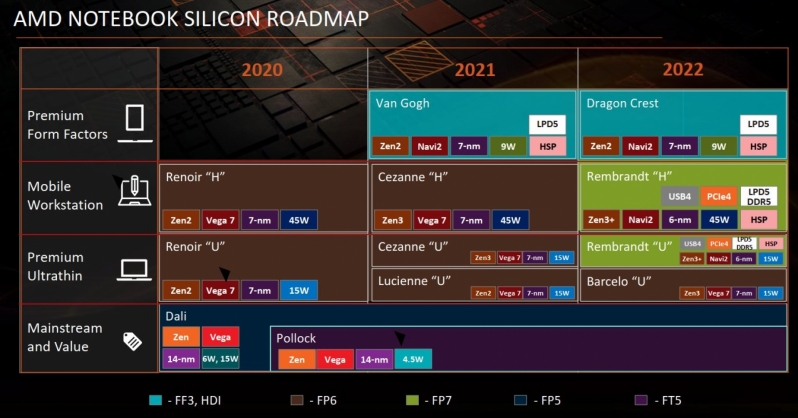 2022 will be an interesting year for AMD's Ryzen Mobile lineup, as the move to DDR5 memory and RDNA 2 graphics promises to give AMD a transformative boost to their iGPU gaming performance. This change will make AMD's integrated graphics solutions viable for mainstream PC gaming applications, which will be a big selling point for AMD's Ryzen 6000 series Mobile CPU lineup.

You can join the discussion on AMD's Ryzen Mobile Roadmap Leak on the OC3D Forums.