A lot of changes are coming with Zen 4

AMD's hard at work on their next-generation Zen 4 architecture, the new CPU cores that will power the company's future Ryzen and EPYC processors. With Zen 4, AMD plans to offer products that are highly competitive, cementing their market share gains with Zen 3 while pushing for increased sales in all markets.

According to Moore's Law is Dead, AMD's Zen 4 architecture will deliver new features to AMD's Ryzen and EPYC CPU lineups, adding support for AVX-512, PCIe 5.0 (on EPYC Genoa CPUs Only), and a new 6nm I/O die.

According to his sources. AMD is targeting a 20+% increase in IPC over Zen 3, delivering increased performance across a wide range of applications. That said, IPC increases will not deliver the same results across all applications, which means that AMD's performance gains will be above and below that value depending on your chosen applications.

IPC Gains, What Are They?

CPU leaks often discuss IPC (Instructions Per Cycle) gains, and the term is often misused as a generic value that applies to all applications. A 20% reported IPC gain would not give you 20% more performance in all applications, as that is not how CPU architecture work.

When companies quote IPC gains, they are typically discussing performance gains across a range of applications. More often than not, these IPC gains are listed as an average value. AMD's reported 19% IPC gains with Zen 3 were tested across a variety of applications, some of which had single-digit performance gains while others had gains of well over 20%. Some software will love the architectural changes within new CPUs, while others will not see much, or any, benefit.

Zen 4 is due to feature a major node shift and a large architectural shift. Both of these factors are big deals for CPU makers, and having both on a single product is sure to deliver tremendous performance improvements.

AVX-512 is one of the main areas where Intel's products have a clear advantage over AMD's equivalents. By adding support for AVX-512, AMD has an opportunity to take away AVX-512 as a perceived negative from AMD's Zen lineup. AVX-512 is most important within the enterprise/server market, where AMD plans to gain market share from Intel.

Intel's Ice Lake server processor marketing focused heavily on AVX-512, and if AMD supports AVX-512 with Zen 4, Intel's AVX-512 focused marking approach will be a lot less effective. With every new iteration of Zen, AMD wants to eliminate all perceived negatives of its CPU product lines. We have already seen how AMD's gaming focus has improved Ryzen's performance on desktop; we expect a similar approach with AVX-512. 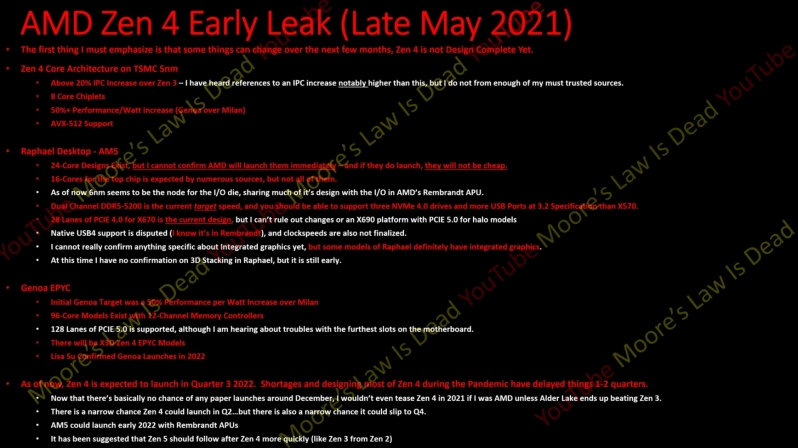 With the move to 5nm cores and a 6nm I/O die (rumoured), AMD has freed up a lot of space under their AM5 IHS, which could be used to create a 24-core Ryzen desktop CPU design.

Right now, AMD is reportedly limiting itself to 16-cores with Zen 4's launch, though a 24-core model could arrive at a later date. AMD is also said to be targeting 5200 MHz as their baseline DDR5 memory speeds for their Zen 4 Ryzen processors, and hope to deliver users 28 PCIe 4.0 lanes on their X670 chipset. AMD's Zen 4 Raphael processors are also said to include integrated graphics, at least on some models.

With Genoa, AMD is reportedly upgrading their EPYC platform with PCIe 5.0 supports, 12-channel DDR5 memory support, and higher per socket CPU core counts. Geno will reportedly feature up to 96 cores per processor, a 50% upgrade over Milan, and these new CPU cores will also feature AMD's Zen 4 cores and all associated performance improvements.

AMD is allegedly suffering from PCIe 5.0 connectivity issues on their early Genoa motherboard designs, mostly when using PCIe lanes that are farthest slots from their motherboard's CPU socket. This indicated challenges in PCIe 5.0 signalling, which will hopefully be addressed before Genoa's launch. 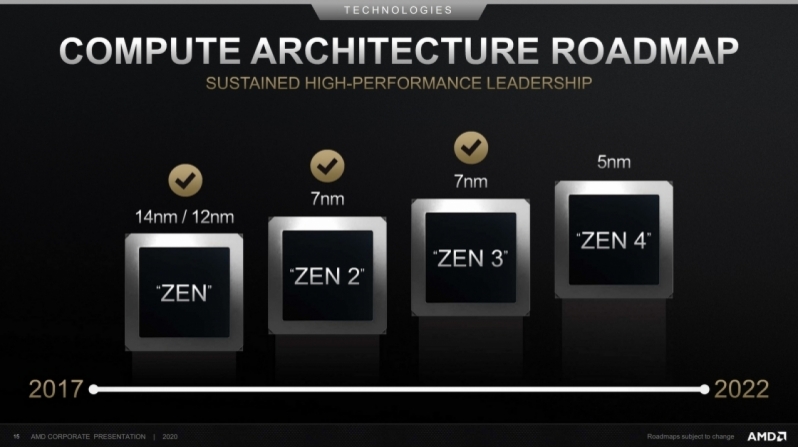 AMD's Zen 4 Raphael desktop processors are reportedly due to launch in Q2/Q3 2022. Genoa will release sometime in 2022.

You can join the discussion on AMD's Zen 4 leaks on the OC3D Forums.

AngryGoldfish
I wonder does 20% IPC include the speed boost from such a massive jump in RAM performance.Quote
Reply