AMD's Ryzen 7000 series is coming soon to desktops and laptops

AMD confirms that Zen 4 is launching this year, with laptop CPUs coming in 2023

AMD has released a new Ryzen CPU roadmap, confirming that their Zen 4 "Raphael" Desktop processors will be launching this year, complete with DDR5 memory support, PCIe 5.0 support, and TDPs of 65W+.

With Dragon Range, AMD aims to deliver the "Number One Choice for Mobile Gaming Dominance", promising their new Zen 4 CPU cores, the "highest core, thread, and cache ever for a mobile gaming CPU", and the "fastest creator and productivity performance ever mobile PCs". AMD's aiming high with Zen 4, and their CPU offerings will only be more powerful for their desktop models.

AMD's Dragon Range and Phoenix mobile processors will both support PCIe 5.0 and DDR5/LPDDR5 memory respectively. AMD has confirmed that Dragon Range may support LPDDR5, and that Phoenix laptops may also support DDR5. 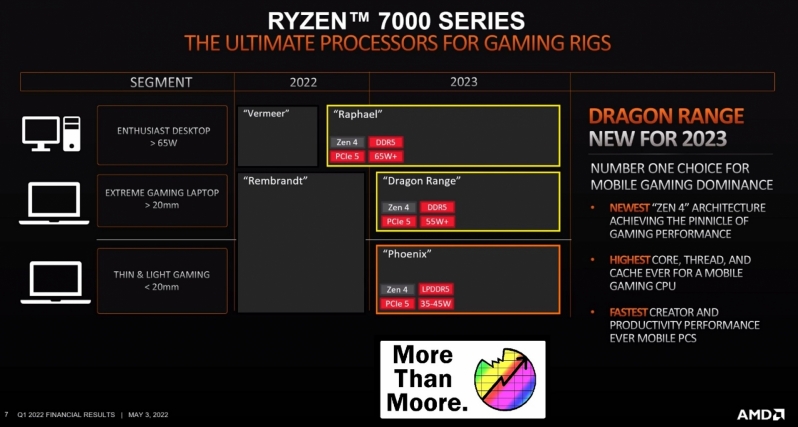 With Zen 4, AMD plans to achieve "gaming dominance" within the laptop market. Previously, AMD's mobile CPUs have had their gaming performance hampered by their relatively small amounts of L3 cache when compared to AMD's desktop CPU models. With Zen 4, AMD's mobile CPUs should feature more L3 cache, and the power of AMD's Zen 4 architecture has made AMD confident that they will achieve "pinnacle gaming performance".

So what can we glean from this CPU roadmap? That AMD is confident about Zen 4 and of their success in 2023. Let's hope that AMD's has something special on the horizon with Zen 4, and that Intel has a strong answer in the works.

You can join the discussion on AMD's updated Ryzen roadmap on the OC3D Forums.

Dicehunter
Genuinely excited to see how Intels 13900K will measure up to AMD's part.Quote
Reply