Sadly, it looks like AMD has no plans to release new Threadripper non-PRO processors

AMD has new HEDT CPUs, and they are going to be monstrously powerful

With 64, 32, 24, 16, and 12 cores respectively, AMD's new Threadripper PRO series are capable of powering though most workloads. With access to 8-channel DDR4 memory, these processors will also feature enough bandwidth to handle most use cases. Additionally, Threadripper PRO series processors feature support for up to 128 PCIe lanes, making these CPUs ideal for systems that require numerous add-on cards or NVMe storage devices. 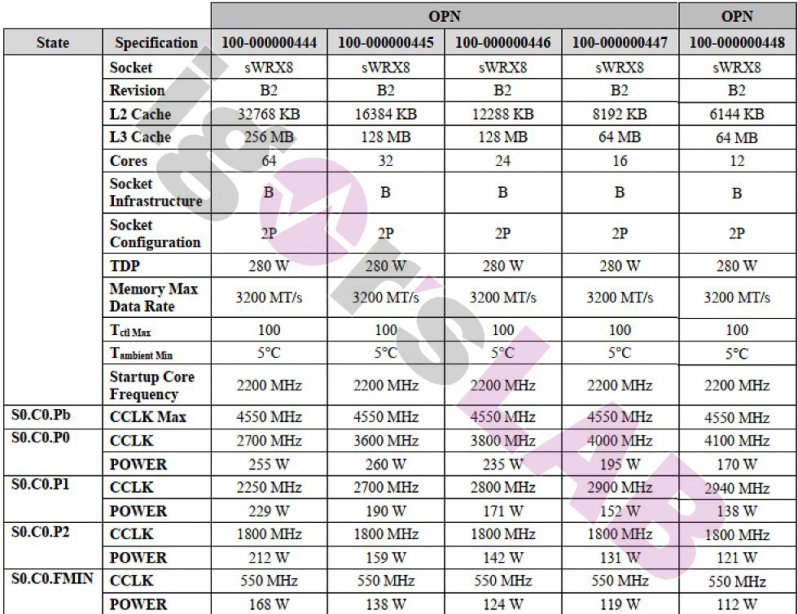 Recent rumours have suggested that AMD's Threadripper PRO 5000 series will be revealed at CES 2022 and launched in March 2022. AMD's new Threadripper PRO series CPUs should further secure for AMD the HEDT CPU market, an area of the PC market that Intel has been practically absent from for a number of years.

You can join the discussion on AMD's Ryzen Threadripper PRO 5000 series' leaked specifications on the OC3D Forums.

NeverBackDown
I like how they say it's 32768KB of L2 cache but 256MB of L3 cache... Why not just say 32MB of L2 cache instead of making it seem like a larger number

Outside of that... 32MB of L2 cache is quite ridiculous in a good way. Can't imagine what the V cache technology would do, they could technically expand L2 size if they wanted instead of cores since the L3 moves off die on the same plane at least.Quote

Avet
Quote:
CPU cache falls into fringe science at best. Increasing L1 and L2 cache size will also increase the latency. More cache can reduce performance. L3 latency is less impactful so it can be scaled with V cache to a certain point. This is good because it reduces the die size.

Mostly it is about fine-tuning and finding the sweet spot between size and latency based on pipeline architecture and several million other factors.Quote

NeverBackDown
It's disadvantages can be combatted with better architecture design. It's one of the biggest areas of focus in CPU architecture from the studies I've seen in my buddies textbook. They are always looking for improvements when increasing size.Quote
Reply