Benchmarks for the company's upcoming Ryzen 7 2700X have appeared on the Geekbench benchmarking database, utilising an existing motherboard design in the form of the ASUS Crosshair VI Hero to deliver performance numbers which surpass what we have seen on our own Ryzen 7 1800X, even while overclocked.

The base clock speed of this CPU model is reported as 3.7GHz, lining up with existing Ryzen 2nd Generation leaks, leaks which suggest that Ryzen 2nd Generation products will not offer their best performance on existing 300-series AM4 motherboards. AMD's existing 300-series motherboards will reportedly lack support for Precision Boost Overdrive, a feature which will allow AMD hardware to deliver higher boost clock speeds. This feature will only be available on 400-series motherboards, which means that the Ryzen 2700X could have some extra out of the box potential.

When compared to average scores from AMD's Ryzen 7 1700X and 1800X on Geekbench, the 2700X numbers here offer a significant boost to single-threaded and multi-threaded performance. What is also worth noting is that these results are listed with 2400MHz memory, which could hold back the memory performance aspects of this benchmark. While it is possible that these memory numbers have been misreported, these overall results are still a lot higher than what our Ryzen samples have been capable of in this test suite. 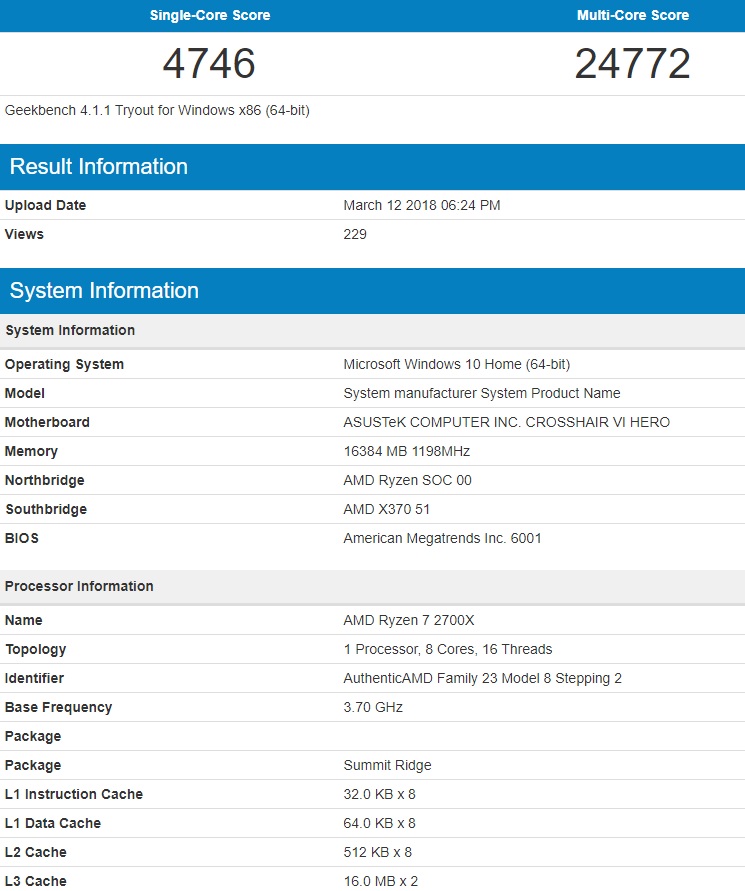 These results paint a positive picture for Ryzen second-generation hardware, though the improvement here is not revolutionary. These results are in line with our expectations for AMD's 2700X, delivering improved clock speeds in both single-threaded and multi-threaded workloads. We look forward to seeing how well Ryzen 2nd Generation hardware will perform in other applications.

You can join the discussion on AMD's Ryzen 7 2700X appearing on Geekbench on the OC3D Forums.

RobM
impressive results, I wonder how much it would improve on the newer chipsetQuote

Dicehunter
For reference, This is an 1800X running at 4GHz with 3400MHz memory.

If AMD can end up doing better work with slower DDR4 memory, Ryzen 2nd Gen will offer a great boost over Ryzen for gamers, especially when combined with higher core clock speeds.

With Ryzen 2nd Gen it's a very "wait and see" kinda deal, will it offer more than a standard Intel Generational upgrade. Will this be AMD's Kaby Lake? I'm certainly looking forward to finding out.Quote

Dicehunter
So this time, 1800X at 4GHz BUT with memory running at the same 2400MHz as the apparent 2700X, nice little performance jump, wonder how much more it will increase if the 2700X was equipped with 3000MHz or more memory.