AMD's X570 Chipsets are fan-cooled: "It's much needed" claims MSI

AMD's X570 Chipsets are fan-cooled: "It's much needed" claims MSI

"Of course nobody wants this" Eric van Beurden claimed on stream, “but it’s much needed for this platform; because there are a lot of speedy things inside and we need to make sure you can use them. So that’s why we need proper cooling.”

After this stream was live, MSI quickly deleted any online VODs of the livestream, likely due to their early, pre-Computex reveal of X570. Thankfully, Tech and Tiny on YouTube managed to download the stream and re-upload it on YouTube.

While motherboard chipset fans are uncommon, it is known that AMD's X570 chipset is AMD's first internal chipset design for their AM4 platform, and the first chipset to offer integrated PCIe 4.0 support. It has been speculated that the TDP of this chipset has moved from 5W on X470 to 15W for X570, creating the need for active cooling solutions.

Thankfully, 15W isn't a lot of thermal energy to dissipate, which means that MSI can utilise a semi-passive heatsink solution for their X570 motherboards. MSI also plans to utilise their GPU fan technology to offer 0dB fan modes and off minimal levels of fan noise thanks to their use of Twin Frozr style fans. MSI reckons that most users will not notice their small fan, as most gaming PCs already include several fans, including those on their CPU coolers and GPU heatsink solutions.

“You will have probably a big CPU cooler,” says MSI's Peter Arts, ”you will have a graphics card in there, your case will have fans. So one small fan… you probably won’t hear it.”

The question this leaves is whether or not these semi-passive cooling solutions are anything to worry about for most consumers, as most PC users will never utilise 100% of their motherboard's chipset resources. It is possible that only edge case scenarios will produce enough heat to force the system's chipset fans on, such as M.2 RAID scenarios and full utilisation of all of a motherboard's SATA ports. This is something that will be investigated when X570 launches. 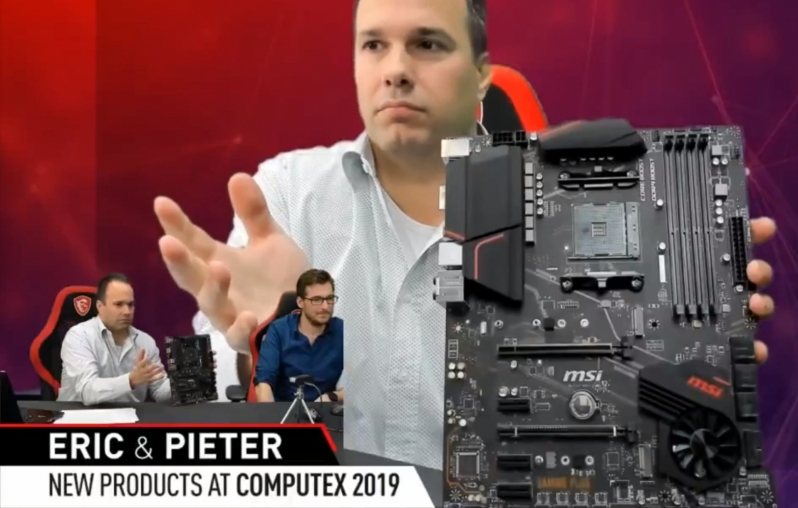 You can join the discussion on AMD's fan cooled X570 chipsets on MSI motherboards on the OC3D Forums.

grec
I think the fans(Lots of X570 mobos seem to have them) are for when the chipset is using RAID mode on the PCIe4 lanes. From what has been said around that's what he means by
Quote:
Quote

Warchild
Quote:
Unless its like the Z97 TUF boards where fan get be manually set and told when to engage.Quote

grec
Yeah ofc they should allow some degree of direct control but apparently that's what bumps the chipset TDP past safe passive cooling ranges in a closed case. Apparently usually it should be closer to the standard 5-8W range when not using NVMe RAID.

Sustained 15W's is often used as a rough cut off for when you start needing semi-passive cooling solutions in tight or hot spaces.Quote

ImprovizoR
I don't know man. I find this very unsettling.Quote

grec
Many AM3+ boards had ~20W chipsets but of course they were split across two chips & heatsinks. These seem to be the first 14nm AMD chipsets though so higher heat density than usual. They're also the first AMD designed Ryzen chipsets though so teething problems are likely I guess.Quote
Reply