AMD's Zen 4 launch has reportedly been delayed over BIOS concerns

AMD has confirmed that they will be revealing their Ryzen 7000 series of desktop processors on August 29th, showcasing them at their latest "together we advance" livestream. Here, we can expect to see AMD's Ryzen 7000 series in action, and some real-world performance data for these processors.

While AMD's Zen 4 Ryzen reveal date has been set in stone, rumour has it that AMD has pushed back their Ryzen 7000 series release date from September 15th to September 27th over BIOS concerns. With this additional time, AMD plans to address early BIOS issues that are reportedly present within their new AM5 CPU platform.

According to a post over on Chiphell, some reviewers have been told to resign NDAs due to AMD's postponed Zen 4 launch plans. At this time, the exact reason behind this delay in unknown, aside from the fact that it is reportedly due to motherboard/BIOS issues. With this in mind, reviewers can expect AM5 motherboard BIOS' to be updated frequently ahead of AMD's Ryzen 7000 series launch, which could mean that a lot of testing a retesting is on the cards for CPU reviewers. 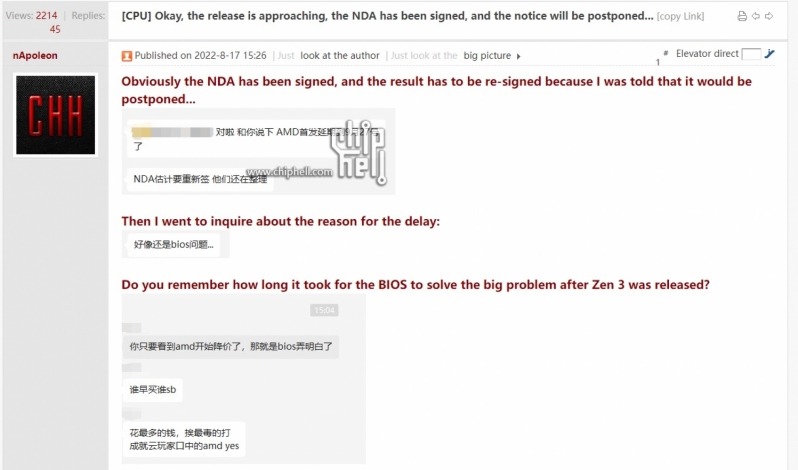 AMD's rumoured two week delay suggests that their AM5 BIOS issues are minor in nature. Two weeks of additional development time isn't much given the complexity of modern PC platforms. AM5 brings a lot of new features to the table for AMD, including DDR5 memory support, integrated graphics across most (possibly all) Ryzen 7000 desktop series CPU models, and support for ultra-fast PCIe 5.0 connectivity.

PC enthusiasts can expect to hear a lot more about AMD's Ryzen 7000 series of desktop processors on August 29th.

You can join the discussion on AMD's rumoured Zen 4 launch delay on the OC3D Forums.