A lot has changed since the release on AMD's Zen architecture in 2017. Before then, mainstream CPU platforms offered up to four cores and eight threads. Now, within two years, mainstream CPU sockets can support CPUs with up to sixteen cores and thirty-two threads, showcasing the impact that AMD's resurgence has had on the CPU market.

In a recent interview with Tom's Hardware, AMD's Mark Papermaster has stated that they see "no imminent barrier" that will stop core/thread counts from increasing further. Now software makers are taking advantage of multi-core and multi-thread processors, knowing where the future lies for mainstream and workstation-grade PCs.

"I don’t see in the mainstream space any imminent barrier, and here's why: It's just a catch-up time for software to leverage the multi-core approach," said Papermaster. "But we're over that hurdle, now more and more applications can take advantage of multi-core and multi-threading.[...]"

"In the near term, I don’t see a saturation point for cores. You have to be very thoughtful when you add cores because you don’t want to add it before the application can take advantage of it. As long as you keep that balance, I think we'll continue to see that trend."

AMD sees CPU core counts increasing further, but the company has no interest in adding more CPU cores without software support. This could be a sign that AMD doesn't plan to increase its CPU core counts with Zen 3, giving software developers time to adjust to today's multi-core era. Perhaps AMD will increase its core counts again with Zen 4, where AMD is reportedly moving to TSMC's 5nm process tech.

Papermaster also stated that frequency scaling isn't as large as it once was with now lithography nodes, a factor which is forcing CPU makers to design their products in a smarter way. Performance gains need to be made with each product generation, and core frequencies are the fastest avenue towards increased throughput. This is why higher core counts and increased I/O bandwidth are important moving forward, as it's unlikely that we will see a 10GHz processor anytime soon. 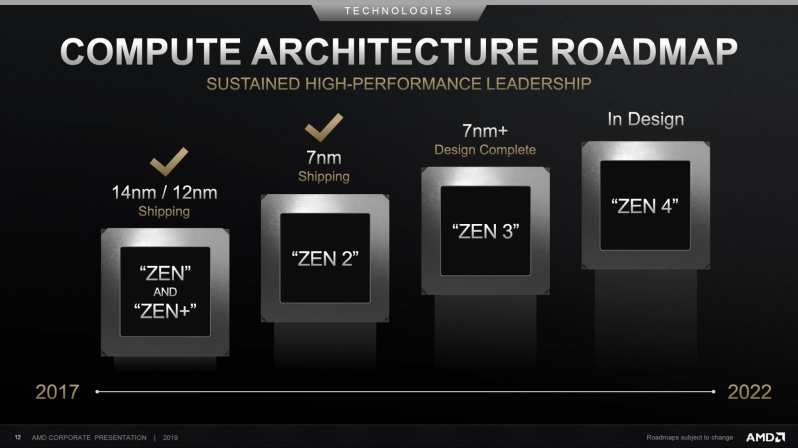 For a while now, AMD has been rumoured to be working on an SMT4 implementation for future Zen processors, allowing each core to deliver four threads instead of two. When discussing the option with Papermaster, he admits that only some workloads would benefit from the feature change, stating that AMD has no announcements regarding SMT4 at this time.

In my opinion, SMT4 would be a useless feature for most desktop systems, especially when some PC builders prefer to disable SMT in its current dual-thread configuration. AMD would be better off investing in design changes that will have a positive impact on more workloads, rather than a hardware upgrade that only benefits niche applications. Below is what Mark Papermaster had to say on the matter.

“In general, you have to look at simultaneous multi-threading (SMT): There are applications that can benefit from it, and there are applications that can’t. Just look at the PC space today, many people actually don’t enable SMT, many people do. SMT4, clearly there are some workloads that benefit from it, but there are many others that it wouldn’t even be deployed. It’s been around in the industry for a while, so it’s not a new technology concept at all. It’s been deployed in servers; certain server vendors have had this for some time, really it’s just a matter of when certain workloads can take advantage of it.”

You can join the discussion on AMD's plans to increase core counts further in the coming years on the OC3D Forums.

Warchild
32 Cores are about to become mainstream!Quote

AlienALX
I hope so. Intel held it up long enough.Quote

NeverBackDown
Didn't see it mentioned but it's because of Moore's law. It's slowing down and the way around it is more cores and more focused transistors to perform specific jobs that will increase IPC since frequency scaling is either not existent or frequencies will fall as we move to smaller node processes.

SMT4 is a useless feature. They would be better off implementing the Bfloat16 support into their hardware to speed up machine learning algorithms significantly. It has massive advantages over traditional FP16 and nearly on par with FP32 in accuracy. They did say they are going to support it in the interview and it's great to hear that. In my computer science class I took when Google announced it we were all pretty excited about it.Quote
Reply