It's official, Zen 4 can run at speeds far beyond 5GHz

At Computex 2022, AMD has showcased a Ryzen 7000 series processor running at 5.5 GHz while playing Ghostwire Tokyo. These speeds are much higher than any existing Ryzen series processor, most of which cannot boost to 5GHz during any workloads, never mind past it.

At CES, AMD showcased a Ryzen 7000 engineering sample that ran at an all-core clock speed of 5GHz. Now, AMD has showcased a processor that can deliver speeds that a 500 MHz faster. That's crazy.

It is worth noting that AMD showcased the performance of only a single core on their Ryzen 7000 demo processor, and that the clock speed of this CPU core fluctuated between 5300 MHz and 5500 MHz. Even so, keeping a core consistently above 5 GHz is a huge achievement for AMD, and will result in enhanced single-threaded performance for AMD's next-generation CPUs, especially when combined with IPC enhancements.

AMD's Lisa Su stated that these boosted clock speeds will help AMD to delver a more consistent gaming experience to Ryzen 7000 series users, which is great news considering how demanding modern games can be on your CPU (We're looking at you Total War Warhammer III...). 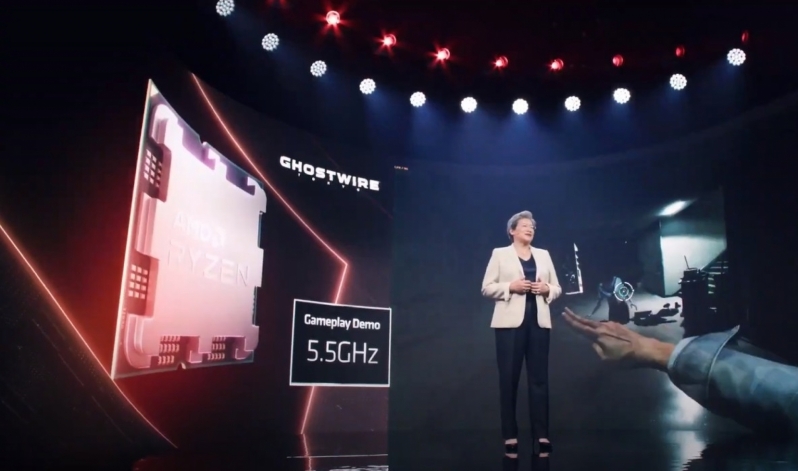 Sadly. AMD has not revealed the exact specifications of their next-generation Ryzen 7000 series processors, but they have promised 15% (or greater) gains in single-threaded performance, PCIe 5.0 support, new power optimisations, and DDR5 memory support. Ryzen 7000 will be AMD's first AM5 series processors, moving AMD away from their AM4 socket ecosystem.