At CES 2022, AMD revealed their "fastest gaming processor" with their Ryzen 7 5800X3D, but that isn't all that AMD has coming in 2022. Later this year, AMD's planning to launch its Ryzen 7000 series of Zen 4 processors, 5nm CPUs that are already running in AMD's labs.

During their Product Premiere keynote, AMD showcased prototype Zen 4 silicon working with a reference AMD motherboard with DDR5-4800 memory. Sadly, no performance results for this processor are available to compare with AMD's current offerings, but that hasn't stopped AMD from setting expectations high with Zen 4.

A new socket, new cores, 5nm, and a new platform

With their Ryzen 7000 series processors, AMD will be launching a new CPU socket  called LGA1718 on a new CPU platform called AM5. With AM5, AMD will be supporting DDR5 memory and PCIe 5.0, offering more memory bandwidth and connectivity bandwidth to desktop PCs than they ever have before.

The move to AM5 marks the end of AMD's long supported AM4 platform, with AMD's Ryzen 7 5800X3D being the last new processor for the platform. The move to LGA will bring an end to bent CPU pins, making AMD's processors less fragile and less prone to damage.

The last time AMD delivered such a major core and lithography node shift at the same time was with Zen 2 and their Ryzen 3000 series. Zen 2 was a major turning point for AMD, and with similar technological shifts with Zen 4, there is little reason not to be hyped for AMD's next-generation processors. 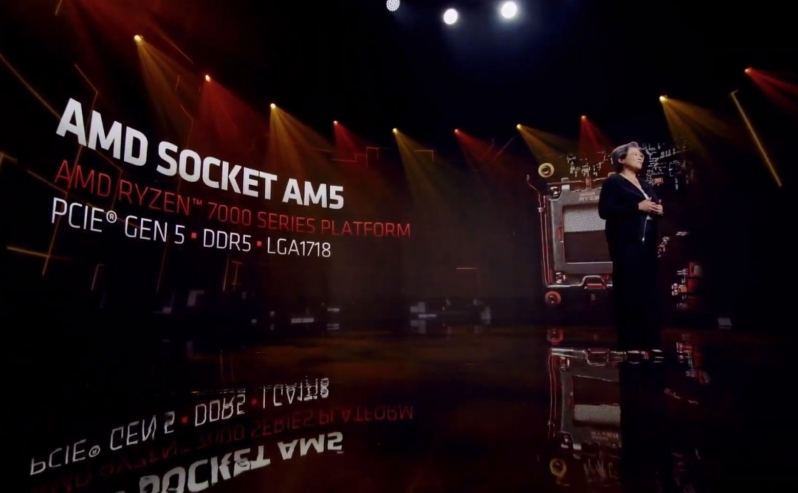 "All of those Zen 4 cores are running at 5 GHz"

During their Zen 4 tease, AMD showcased a prototype processor playing Halo Infinite's PC version, with Lisa Su claiming that "all of those Zen 4 cores are running at 5 GHz". At the time of writing, no currently available Ryzen processor can run at 5 GHz, never mind running at those speeds on all cores.

While AMD has not revealed how many cores their Ryzen 7000 prototype contains, the fact that an early prototype is already running at 5GHz on all cores is a major achievement for AMD. Early silicon often runs at lower clock speeds than their finalised retail counterparts, and that means that 5+ GHz clock speeds should be possible on AMD's Zen 4 CPUs.

Alongside these clock speed benefits, we expect AMD's Ryzen 7000 series processors to deliver more performance per clock, further increasing the single-threaded and multi-threaded performance of their next-generation processors. Zen 3 launched in late 2020, and we expect AMD to have made some major changes to their Zen architecture since Zen 3's cores were finalised. We expect big things from AMD. 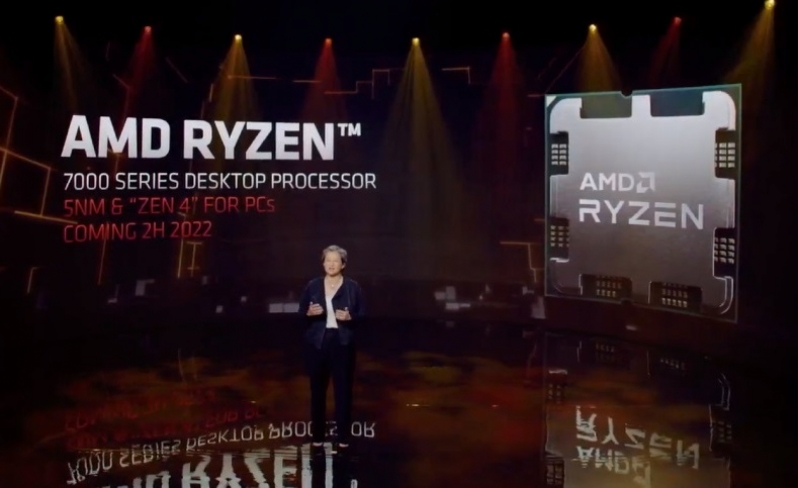 While AMD has discussed many of Zen 4's improvements, there are still a lot of mysteries surrounding Zen 4. Will Zen 4 include V-Cache? How many cores will the Ryzen 7000 series offer on AM5? How much will Ryzen 7000 cost? Will DDR5 availability improve in time for Zen 4's launch?

You can join the discussion on AMD's Zen 4 Ryzen 7000 teaser on the OC3D Forums.

Dicehunter
Will be interesting to see if Zen 4 can work with DDR4 as well, Would make adoption a hell of a lot easier as I cannot see DDR5 kits with decent speeds and timings being any less expensive by the time it comes out.Quote

WYP
Quote:
I doubt it. AMD has never discussed DDR4 memory when talking about their next-generation CPUs previously. Using it with AM5 would force them to use it for ages, assuming that AM5 is intended as another long-term socket for AMD.

As for adoption, the Ryzen 7 5800X3D is for those who do not want a full platform upgrade. It supports motherboards as far back as X470 and B450.

DDR5 availability should improve a lot as this year progresses. It won't be as cheap as DDR4, but there are workloads that benefit from the bandwidth boost.Quote

AlienALX
Yeah I don't think they will bother.Quote

demonking
Highly doubt it'll support Ddr4. It will require different motherboards and software just to cover the power.
Looking forward to these though, should give Intel a bit of a kick when they're performing hopefully on par but using less power and giving off less heat.
Let's wait and see though, nobody gives the full truth in these things and there is probably a reason amd didn't do any comparisonsQuote

WYP
Quote:
Yeah. With AM5 AMD will have a clean slate. Would be a shame to them shackle themselves to supporting both DDR4 and DDR5 with AM5, especially if they plan to support it long term.

Right now, it doesn't make sense for AMD to show real performance data. It would only serve to make their current offerings look bad and make their upcoming Ryzen 7 5800X3D look bad. Saying that all of their Zen 4 cores are running at 5 GHz is enough to garner excitement. That's all they need.

Beyond that, adding both DDR4 and DDR5 support to their I/O dies would add to their transistor count. It would be a waste of silicon, add an extra thing for AMD to support. It would only serve to fragment the market and make things more expensive to manufacture/support.Quote
Reply