Have a look at the future of AMD's CPUs

Zen 4 with V-Cache is coming

At AMD's latest financial analyst day, the company has showcased a new high performance CPU core roadmap, confirming that Zen 5 will be coming in 2024 and that Zen 4 CPUs will be available with V-Cache.

AMD knows that the industry is moving past the era where a single CPU can be the best at everything, and Zen 4c will allow AMD to delver CPUs with higher core counts. EPYC CPUs with Zen 4 CPU cores will feature up to 96 cores, whereas Zen 4c based EPYC processors will offer users up to 128 CPU cores. Whether or not additional cores, or more versatile cores is better for your specific workload, remains to be seen. Either way, AMD has a strong CPU for you.

This new roadmap claims that Zen 5 will be coming in 2024, which means that Zen 4 will be AMD's flagship CPU architecture throughout 2023. Zen 4 CPUs are launching this year, and it is likely that Zen 4 V-Cache processors will launch in early-mid 2024. 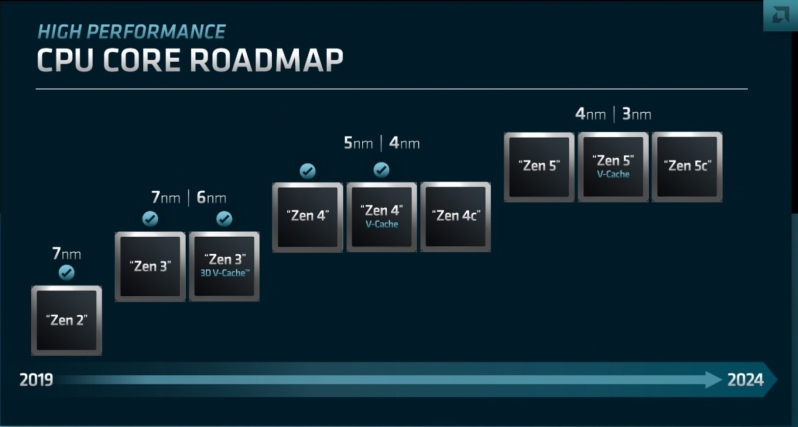 You can join the discussion on AMD's new CPU roadmap on the OC3D Forums.

NeverBackDown
Feels like they are doing the V-Cache variants to be the rerelease next year's product like GPUs used to be. Instead of just releasing their top tech right away.Quote
Reply