An Intel Xeon (Sapphire Rapids) CPU has been spotted with 56 cores and boost speeds as high as 3.7GHz

This new Xeon has been showcased with 1TB of DDR5 memory

Intel's 56-core Sapphire Rapids Xeon has been spotted with boost speeds that could reach as high as 3.7 GHz

Sapphire Rapids is due to launch this year, offering users up to 56 cores and 112 threads. This processor design features an all-P-Core design from Intel, and a new engineering sample of  the processor has been show with a TDP of 350 watts.

Intel's Sapphire Rapids Engineering Sample has been showcased by @yuuki-ans on Twitter, highlighting base and boostr frequencies of 1.7GHz and 3.3GHz. However, a HWINFO64 screenshot for this processor showcases a maximum single-core boost speed of 3.7GHz.

The new Xeon apparently features an L3 cache that is 105MB in size, with each core featuring 2MB of L2 cache per core. The CPU has also been shown with 1TB of DDR5 memory connected to it, running at CL timings of CL40-39-38-76. This processor is likely using 48)) MT/s DDR5 memory.

Intel's Sapphire Rapids processors appear to support advanced instruction sets like AVX-512, a workload that AMD's current generation EPYC processors do not support. AVX-512 support remains an advantage that Intel's Xeon processors have over their AMD counterparts, and it is currently unknown if AMD's Zen 4 processors will feature AVX-512 support. 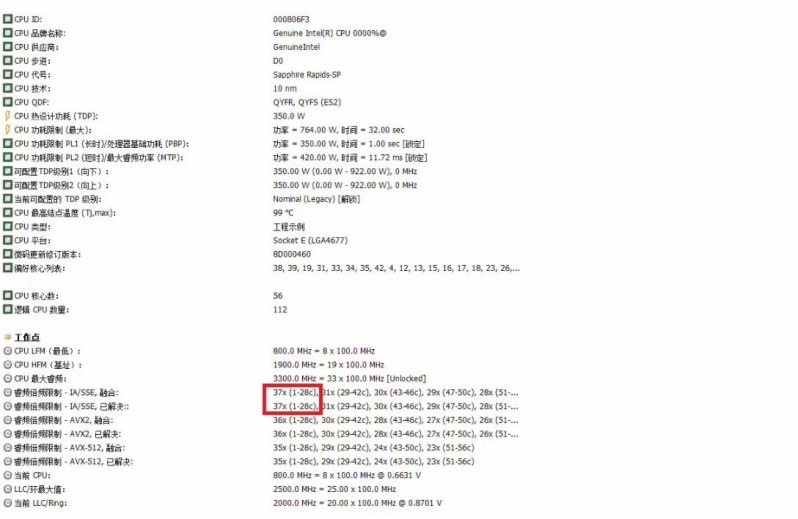 Intel's Sapphire Rapids processors are doe to launch this year, with Emerald Rapids succeeding them in 2023. Intel has a Xeon roadmap that aims to have yearly updates. with Granite Rapids coming in 2024. Intel will also be splitting their Xeon roadmap, offering models that feature all-P-Core designs and models that feature all-E-Core designs. Hybrid Xeon processors do not appear to be in the works.

You can join the discussion on Intel's Sapphire Rapids Xeon processors on the OC3D Forums.