Does AMD has new DDR5 enabled processors to show us at Computex?

Is this our first look at AMD's next-generation processors?

As spotted by @BenchLeaks on Twitter an unknown AMD Ryzen processor has appeared on the BAPCo CrossMark benchmark database that appears to feature 4800 MT/s DDR5 memory. This processor appears to be from a ASUS computer, based on the fact that the CPU is listed as being a "ASUSTeK COMPUTER INC. M3402RA" system. Below Benchleaks' original Tweet, one comment claims that this system is ASUS' planned "ASUS Vivobook 14 OLED (M3402)" laptop.

Rumour has it that AMD's newly leaked processor is a next-generation APU called "Rembrandt", which allegedly features Zen 3+ CPU cores, and an RDNA2 based iGPU. This CPU allegedly uses DDR5 memory, which this leak supports, giving this mobile processor a major boost in memory bandwidth over its DDR4 based predecessors.

The benchmark below reveals that AMD's unknown processor is an 8-core CPU that the ASUS system that its used with features a 2560x1600 screen resolution. At this time, it remains unknown exactly what this new AMD processor is, with some suggesting that it is an early Zen 4 CPU.

Based on the performance of this leaked processor, it is likely that this new 8-core AMD CPU is a mobile processor, supporting the theory that this is a "ASUS Vivobook 14 OLED (M3402)" laptop. Recent rumours have suggested that AMD's Ryzen 6000 series mobile CPUs will be revealed at CES with Rembrandt silicon. 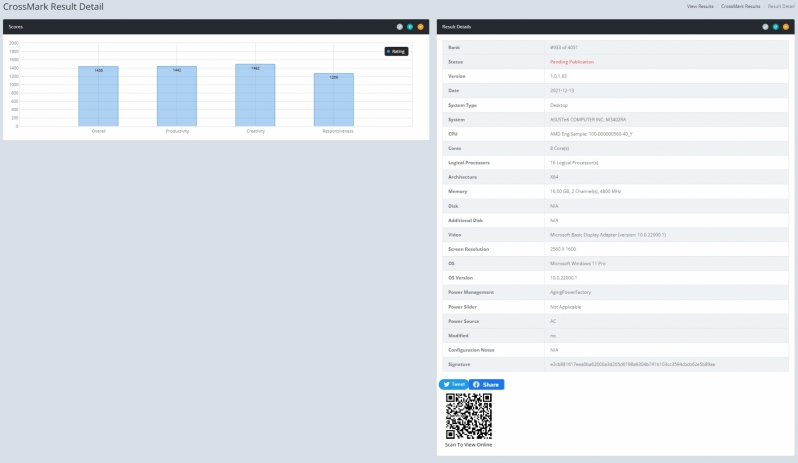 With Rembrandt reportedly using RDNA 2 graphics and DDR5 memory, it is probable that the processor will deliver a significant leap in gaming performance over other processors integrated graphics solutions. This could make AMD's next-generation laptops strong portable gaming solutions, thanks to the gaming prowess of RDNA 2 and the bandwidth offered by DDR5.

You can join the discussion on AMD's leaked Ryzen CPU with DDR5 memory on the OC3D Forums.

robert3892
Maybe a mobile CPU sample from AMD or a desktop sample.Quote


in contrast to what a soc for smartphones?