Apple's latest chip is up to 40% faster than its predecessor

Apple's M2 processor features over 20 billion transistors, representing a 25% increase in transistor count over Apple's M1 processor. These transistors are used to increase the performance of Apple's latest SOC across various areas of the processor, from the chips various accelerators to the chips CPU cores and GPU cores.

The Apple M2 processor will be seen first in Apple's updated 13-inch Macbook Pro systems. Below is what Apple had to say about their new M2 processor. 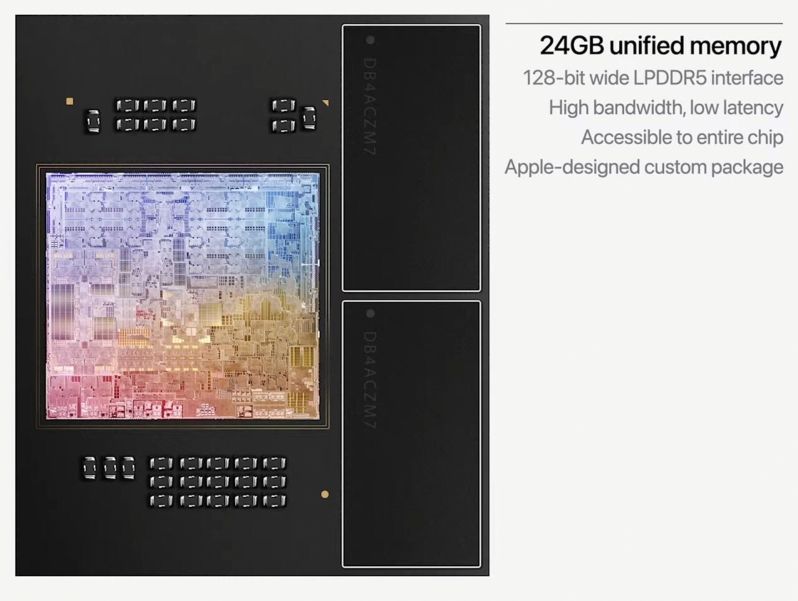 Apple today announced M2, beginning the next generation of Apple silicon designed specifically for the Mac. Built using second-generation 5-nanometer technology, M2 takes the industry-leading performance per watt of M1 even further with an 18 percent faster CPU, a 35 percent more powerful GPU, and a 40 percent faster Neural Engine. It also delivers 50 percent more memory bandwidth compared to M1, and up to 24 GB of fast unified memory. M2 brings all of this—plus new custom technologies and greater efficiency—to the completely redesigned MacBook Air and updated 13-inch MacBook Pro.
"M2 starts the second generation of M-series chips and goes beyond the remarkable features of M1," said Johny Srouji, Apple's senior vice president of Hardware Technologies. "With our relentless focus on power-efficient performance, M2 delivers a faster CPU, GPU, and Neural Engine. And along with higher memory bandwidth and new capabilities like ProRes acceleration, M2 continues the tremendous pace of innovation in Apple silicon for the Mac."

The system-on-a-chip (SoC) design of M2 is built using enhanced, second-generation 5-nanometer technology, and consists of 20 billion transistors—25 percent more than M1. The additional transistors improve features across the entire chip, including the memory controller that delivers 100 GB/s of unified memory bandwidth—50 percent more than M1. And with up to 24 GB of fast unified memory, M2 can handle even larger and more complex workloads. 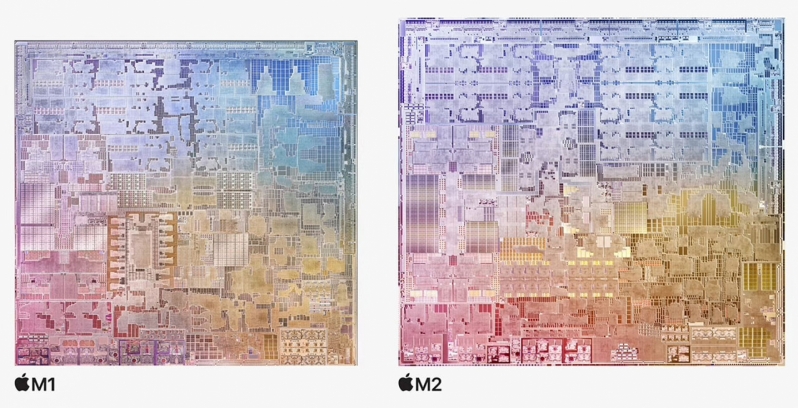 The new CPU features faster performance cores paired with a larger cache, while the efficiency cores have been significantly enhanced for even greater performance gains. Together, they deliver 18 percent greater multithreaded performance than M1, so M2 can rip through CPU-intensive tasks using very little power, like creating music with layers of effects or applying complex filters to photos. Compared with the latest 10-core PC laptop chip, the CPU in M2 provides nearly twice the performance at the same power level. And, M2 delivers the peak performance of the PC chip while using just a quarter of the power. When compared to the latest 12-core PC laptop chip—which needs dramatically more power to deliver an increase in performance and is therefore found in thicker, hotter, more noisy systems with less battery life—M2 provides nearly 90 percent of the peak performance of the 12-core chip while using just one-fourth the power.

M2 also features Apple's next-generation GPU with up to 10 cores—two more than M1. Combined with a larger cache and higher memory bandwidth, the 10-core GPU delivers a big boost in graphics performance, bringing up to 25 percent higher graphics performance than M1 at the same power level, and up to 35 percent better performance at its max power. Compared with the integrated graphics of the latest PC laptop chip, the GPU in M2 delivers 2.3x faster performance at the same power level, and matches its peak performance using a fifth of the power. The higher performance per watt from M2 enables systems to have exceptional battery life, and run cool and quietly, even when playing graphics-intensive games or editing massive RAW images. 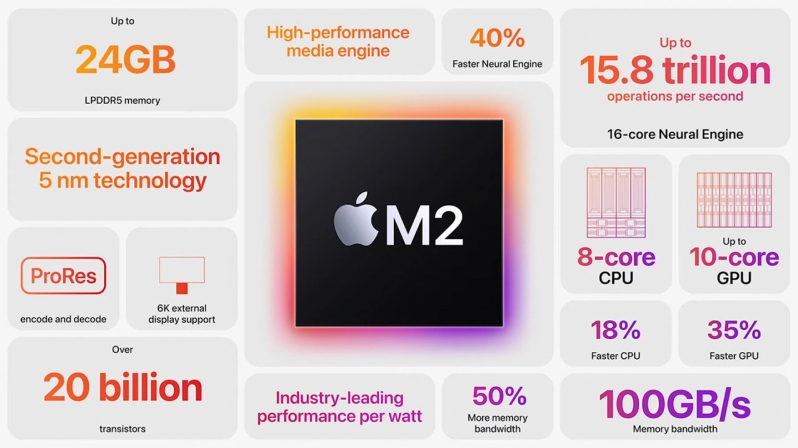 macOS has been designed for Apple silicon, and the combination of macOS Monterey and the powerful new M2 delivers breakthrough performance and productivity for users. Mac computers powered with Apple silicon have access to the largest collection of apps ever for Mac, including iPhone and iPad apps that can run on Mac, and universal apps that unlock the full power of M-series chips.
macOS Ventura, coming this fall, will also take full advantage of M2, bringing new features including Stage Manager, and powerful new capabilities with Continuity Camera and Handoff in FaceTime. macOS Ventura also includes big updates to Safari, Mail, Messages, Spotlight, and more.

Apple Silicon and the Environment

The power-efficient performance of M2 helps the new MacBook Air and 13-inch MacBook Pro meet Apple's high standards for energy efficiency. Today, Apple is carbon neutral for global corporate operations, and by 2030, plans to have net-zero climate impact across the entire business, which includes manufacturing supply chains and all product life cycles. This means that every chip Apple creates, from design to manufacturing, will be 100 percent carbon neutral.

You can join the discussion on Apple's new M2 processor on the OC3D Forums.

dazbobaby
Can you upgrade the RAM and SSD? No... no thank you e-waste.Quote

NeverBackDown
I'd love to see the cherry picked test set ups and the "twice the performance at same power compared to 10 core PC CPU".Quote
Reply