In a new press release, ASRock has announced that their B450 motherboards will soon support AMD's Ryzen 5000 series of processors through new BIOS updates.

Having checked the web pages for many ASRock's B450 motherboards, it has become clear that many of these new BIOS files are not available to download at this time, despite the fact that AMD's Ryzen 5000 series are listed as supported processors. We expect ASRock to update their website to make these new BIOS files downloadable for all of their B450 in the near future.

With these BIOS updates, PC builders with B450 motherboards will be able to utilise AMD's Ryzen 5000 series processors without needing to purchase a newer AMD 500-series AM4 motherboard. This should make the upgrade process a lot simpler and cheaper for a lot of PC builders. 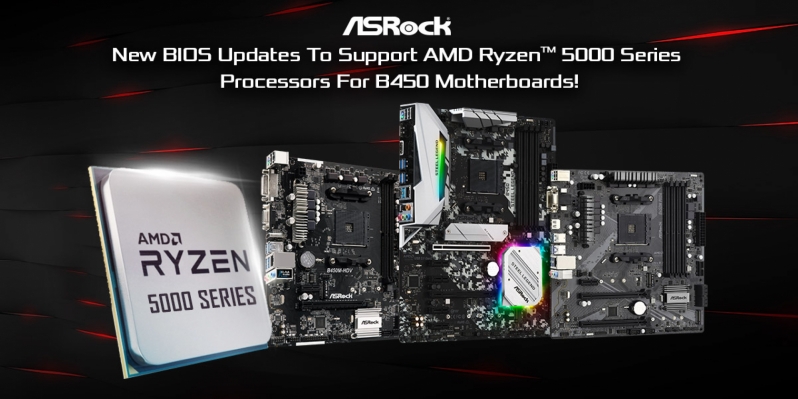 The list below highlights the BIOS files which are required to support AMD's Ryzen 5000 series of processors. At this time, ASRock has no ETA for when their X470 motherboards will receive Ryzen 5000 series CPU support.

You can join the discussion on ASRock's Ryzen 5000 compatible BIOS files for B450 motherboards on the OC3D Forums.

tgrech
BIOS for my board is out

Have you got the upgrade itch yet?Quote

tgrech
Think I might wait and see if there's a 5700 or Intel induced price drop in the next couple months, or at least around CES, tempted thoughQuote

Greenback
Quote:
Can't even decide if it's worth upgrading my 3700xQuote

Tripp
Quote:
Right there with you buddyQuote
Reply