Razer has entered the motherboard market

ASRock, in partnership with Razor, has launched two new 500-series AM4 motherboards, creating their new Taichi Razor Edition lineup. These two motherboards are the first to offer PC builders integrated Razer Chroma RGB support, which has thus far been integrated into 150 games natively.

These Taichi Razer Edition motherboards are designed for gamers, blending Ryzen processors with Killer Networking and Razer Chroma RGB. Instead of designing their own motherboards, Razer has opted to tap the engineering talents of ASRock to create new motherboards which are worthy of the Razer and Taichi names.

For Razor fans, these new motherboards are a must. There are no other motherboard options for those who want an all-Razer PC. Strangely, Razer appears to have no plans to create Intel Z490 motherboards. However, ASRock and Razer may have Z590 series motherboards in the works for Intel's upcoming 11th generation Rocket Lake processors.

You can join the discussion on ASRock's X570 and B550 Taichi Razer Edition motherboards on the OC3D Forums. 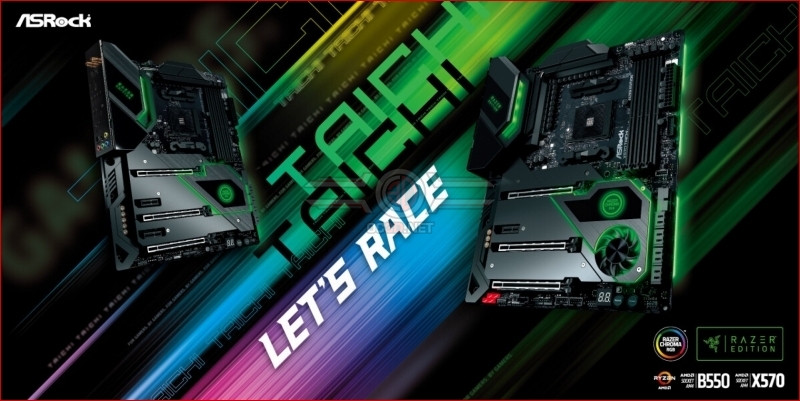 AlienALX
So this is pretty much the NZXT board with more LEDs?Quote

AngryGoldfish
I'm not big on motherboard 'armour'. I love seeing all the traces of the PCB. The NZXT motherboards look like LEGO models.Quote

Deadtroopers
I'm a Razer fan; these boards ARE a must... a must NOT buy.Quote

Dicehunter
Quote:
I'm with you on that one, I like Razers general design aesthetic but this just seems tacky.Quote
Reply