Last week, ASRock announced that they had delivered Ryzen 5000 series CPU support to its B450 series motherboards, allowing Zen 3 processors to be used on their older AM4 motherboards using new AGESA 1.1.8.0 compatible BIOS files.

Today, we have been confirmed that these BIOS files have been removed from ASRock's website as well as all Ryzen 5000 series CPUs on B450 motherboard support lists. We have also confirmed that ASRock's news post regarding Ryzen 5000 series CPU support on their B450 motherboards has also been removed from their website. In short, ASRock has erased all traces of last week's announcement.

This redaction was first spotted by Hardware Canucks, who discussed ASRock's removed Ryzen 5000 series B450 support on Twitter. At this time, it is unknown why ASRock has pulled its AGESA 1.1.8.0 B450 BIOS files from the internet, and ASRock has yet to make any public statements on the issue.

It is possible that ASRock's early BIOS files contained a bug, though it is also likely that AMD forced the company to remove these BIOS files from their website. ASRock may have released their BIOS files earlier than AMD intended, as these BIOS files predate AMD's reveal of Precision Boost Overdrive 2, which is a feature of AGESA 1.1.8.0 BIOS' on 500 series and 400 series AM4 motherboards. 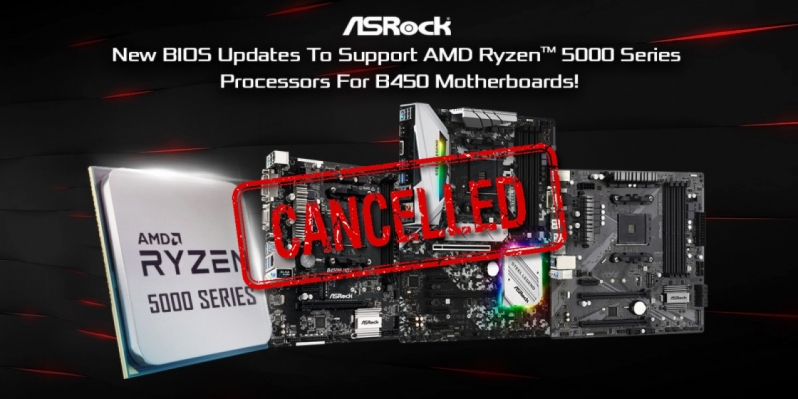 It will take time to figure out exactly what happened here. For now, know that ASRock's Ryzen 5000 series BIOS files for B450 motherboards are currently available.

These BIOS files will likely reappear on ASRock's website again at a later date.

You can join the discussion on ASRock removing their Ryzen 5000 compatible B450 BIOS files from the internet on the OC3D Forums.