Look at the size of that VRM heatsink!

Back at Computex, Intel showcased a staggeringly fast 28-core PC, offering 5GHz clock speeds on all cores thanks to the cooling efforts of a nearby water chiller. At this event, Intel promised to release a 28-core desktop processor later in the year, with their demo system using an EATX LGA3647 motherboard with 6-channel DDR4 memory.

A lot of time has passed since then, and over time ASUS' prototype motherboard (pictured here) has evolved to become what Videocardz call the "ROG DOMINUS", a Cascade Lake-X series motherboard with an insane VRM setup, 12 DIMM slots for 6-channel DDR4 memory and what appears to be two DIMM.2 connections.

The ROG DOMINUS fits into the EATX form factor, with a design that is significantly wider than other consumer-grade motherboards, chipping with a VRM heatsink that appears to be as wide as the board itself. Two U.2 connections are visible, as well as two DIMM.2 slots, each of which should be able to support two M.2 SSDs (assuming that they are the same as Intel's other DIMM.2 cards). 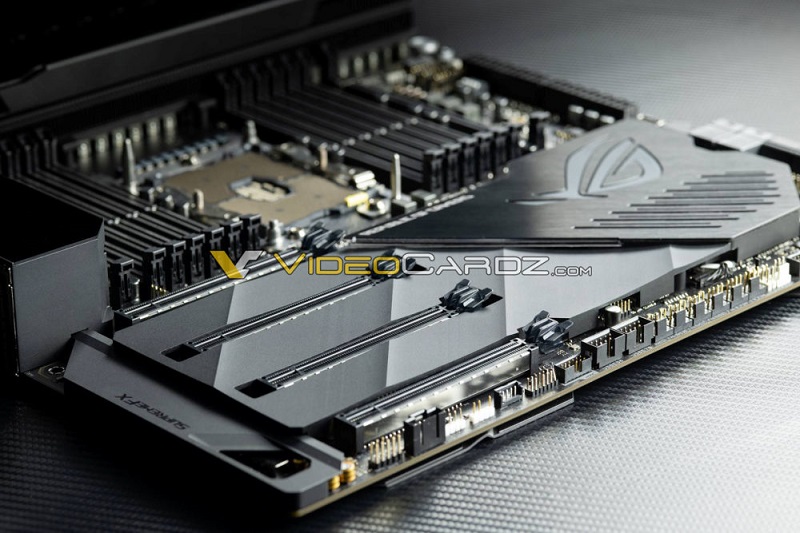 Cascade Lake-X is Intel's answer to AMD's Threadripper 2nd Generation products, though at this time it remains unclear how this new LGA3647 platform will cost, never mind the cost of huge CPUs that they will support. As far as we are aware, Cascade Lake-X will not make use of a Multi-chip-Modular design like Threadripper 2nd Generation processor, making Intel's staggeringly huge chip design extremely difficult/expensive to manufacture. Don't expect anything on LGA 3647 to be cheap...

You can join the discussion on ASUS' Cascade Lake-X ROG Dominus LGA3647 motherboard on the OC3D Forums.

Dicehunter
You can tell Intel are desperate as that is basically a server motherboard, The socket and CPU cooler attachment points are a dead give away

Warchild
I guessed server when I saw all the Memory slots.Quote

g0ggles1994
I instantly thought "server/workstation" as well. Given the sheer size of the VRM heatsink, I'm going to guess this thing will be sucking power like a Ford GT sucks petrol.

But I can't get over that this motherboard has 2 x 24 pin power connectors. Seriously WHY?Quote

Dicehunter
Quote:
Because it's been rushed to compete with the 32 core Threadripper hence the chiller cooler needed at the initial reveal.Quote

g0ggles1994
Quote:
Aye, I thought that would just increase the amount of 8 pin EPS connectors on it not add an entire 24 Pin ATX