ASUS has confirmed that they plan to support all of AMD's newly announced Ryzen 5000 and 4000 series processors on their existing AM4 series motherboards, including many of their older X370 and A320 designs.

Below is a chart detailing ASUS' AM4 support plans and the company's latest press release regarding its support for AMD's latest Ryzen processors. 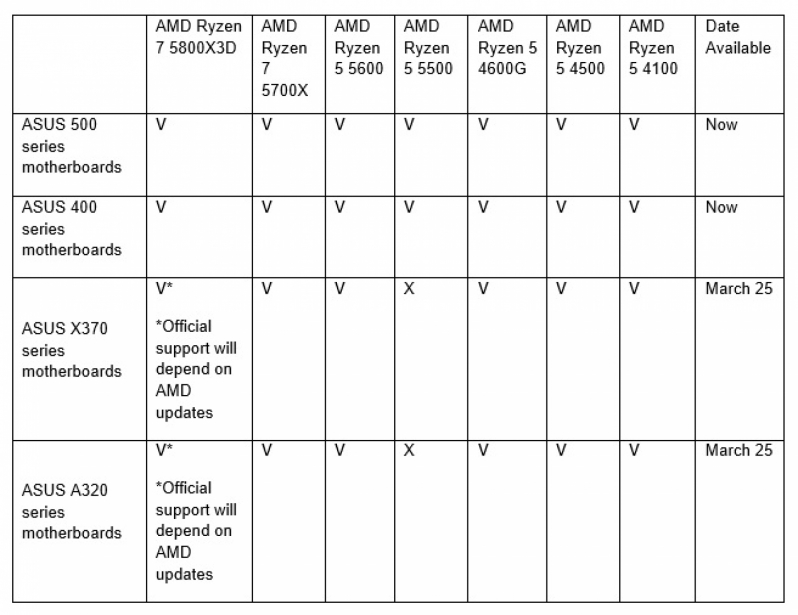 ASUS today announced BIOS support and updates readying a range of motherboards for a new wave of 5000 and 4000 series AMD Ryzen™ CPUs.

To accompany the new Ryzen 7 5800X3D, which features a special 96 MB L3 cache. AMD has released AGESA Version 1.2.0.6b to improve system performance. Many ASUS 500, 400, A320 and X370 series motherboards already have BIOS updates featuring this new AGESA build, and all remaining models that are compatible will receive corresponding BIOS updates by March 25.

All other CPUs in this wave will be recognized by 400 and 500 series ASUS motherboards via pre-existing BIOS updates — also featuring AGESA version 1.2.0.6b — that can be downloaded from the ASUS Support website at https://www.asus.com/support. Previous generation ASUS motherboards will receive support for these new CPUs according to the chart below.

All UEFI BIOS updates will be available on the respective motherboard support pages, which can be accessed via the ASUS Support website at https://www.asus.com/support.

You can join he discussion on ASUS' Ryzen/AM4 support plans on the OC3D Forums.

meuvoy
Did I understand this right, the A320 Mobos will get Ryzen 5000X3D support, but not the b350 boards?Quote