ASUS is adding MemTest86 to their ROG Z590 motherboards

ASUS is adding MemTest86 to their ROG Z590 motherboards

With their Republic of Gamers (ROG) Z590 motherboards, ASUS will be offering their users support for MemTest86, a pre-installed memory testing utility which will allow their users to verify the stability of their memory setups.

Intel's Rocket Lake processors are set to offer their users a stronger integrated memory controller than their predecessors, promising support for 3200MHz DDR4 natively. Overclockers will achieve even higher speeds with some tinkering, with many manufacturers promising support for 5,000MHz+ memory overclocks on their motherboards.
With memory speeds and timings being an area of growing interest for PC gamers, ASUS' integrated Memtest86 support for Z590 ROG motherboards will be a beneficial add-on for those who wish to use their memory at optimal speeds. This tool will also help ROG users diagnose faults, and unstable overclocks with ease, removing the need to create their own MemTest86 testing tools.

According to @momomo_us, this feature will be coming to ASUS' ROG Z590 motherboards alongside a 60-day subscription to AIDA64 Extreme. 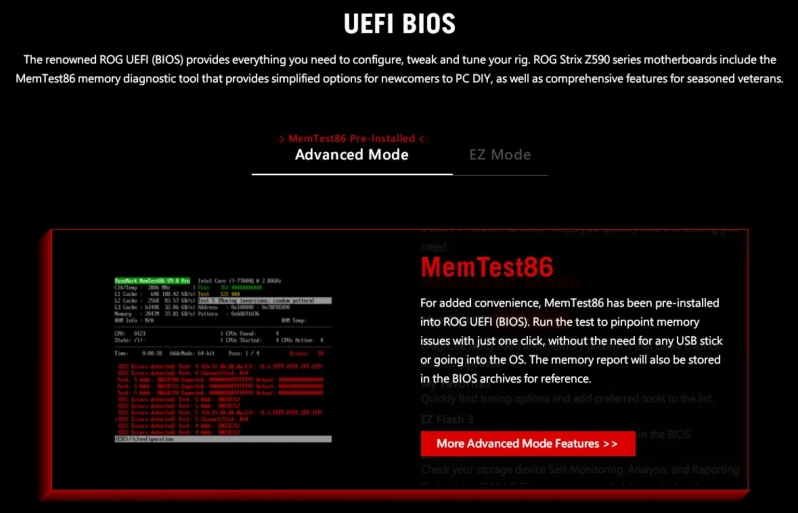 You can join the discussion on MemTest86 getting added to ASUS' ROG Z590 BIOS' on the OC3D Forums.

Kei
My 15 year old DFI lanparty NF4 Ultra board had this baked into the bios. Got to agree with looz, it was a bit slow 15 years ago when most people had between 512mb and 2gb of ram. I imagine it is painfully slow with 16-32gb.Quote
Reply