If you have read our Kaby Lake i7 7700K and i5 7600K reviews, you will already know that both CPUs are phenomenal overclockers, with all of our samples being able to achieve overclocks of 5GHz or over with the correct settings.

This takes Intel back into the overclocking glory days and makes Kaby Lake a significant improvement over Skylake despite the lack of IPC improvements.

As a website believe that manual/traditional overclocking methods are the best way to get the most performance out of your CPU, though it must be admitted that manual overclocking can take a lot of time and effort, especially if you are a beginner.

Automatic overclocks are not new, though in the past they would use excessively high voltages and supply mediocre overclocks, though with this generation ASUS has been able to surprise us with a 5GHz "one-click" overclocking profile which will function on all of their Z270 motherboards when used with an overclocking ready Kaby Lake CPU.

ASUS' engineers have worked hard to create this profile and through rigorous testing, have been able to create a profile which will work with 80% of all unlocked Kaby Lake CPUs. 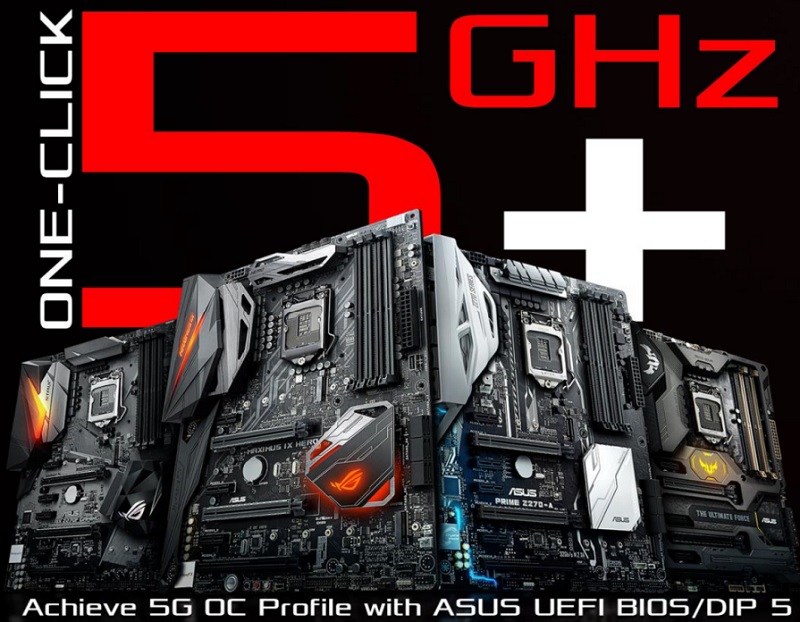 How to set up ASUS' 5GHz overclocking profile

The first thing to note is that ASUS' 5GHz overclocking profile is not guaranteed to work. Every CPU is different and has its own unique characteristics, some CPUs need more voltage than others to reach the same clock speeds and others and some chips will be able to achieve amazing overclocks like 5.2 GHz while others could max out at 4.8 or 4.9.

This is what we call the silicon lottery and like any lottery sometimes you win and sometimes you lose, though as stated above ASUS claim that their profile will work with 80% of all K-series Kaby Lake CPUs.

To use this 5GHz overclocking profile you will need an ASUS Z270 motherboard and an Intel Kaby Lake K-series CPU. Users will need to use a powerful cooling solution to run an Intel Kaby Lake series CPU at 5GHz. We advise anyone who attempts to use this profile to conduct their own thermal and stability testing using a variety of CPU based benchmarks and stability tests like OCCT, wPrime, Prime95 and CineBench.

Below is a screenshot detailing where ASUS' 5GHz overclocking profile is located on ASUS' Z270 series motherboards. 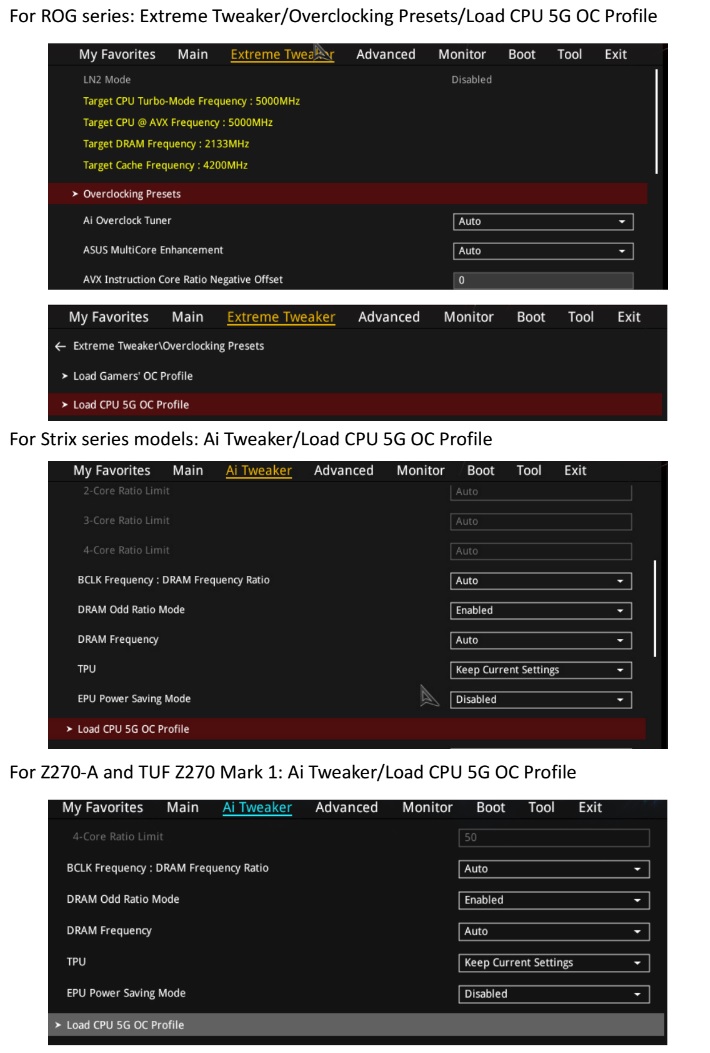 We will be writing a dedicated Kaby Lake/Z270/LGA 1151 overclocking guide in the near future, which will detail exactly how to get the best performance out of your CPU.

It is likely that a lot of Z270 users will be able to run their Kaby Lake CPUs at 5GHz at lower voltages than what ASUS are using in this profile, which is why we would recommend manual overclocking over simple "one clock" solutions.

Manual overclocking will allow you to get the highest clocks out of your CPU at optimal voltages, with lower voltages allowing your CPU to run cooler, with lower power draw and with a longer life expectancy.

With ASUS Z270 motherboards using BIOS revision 0701 or newer, the company has added a new feature which will allow your CPU to use a lower overclock when your CPU reaches a set temperature limit.

this will allow users to maximise their clock speed when running at low loads/temperatures and reduce your overclock when your CPU is under high thermal loads. This will be very helpful to those using mid-range cooling solutions, though the best overclocking experience will always be with higher-end cooling solutions.

ASUS' overclocking temperature control will only be usable when you have set a specific CPU core voltage, this is a great step as every overclocker should know that automatic voltages and overclocking should never mix.

As an example, imagine a CPU running at 5GHz at 1.35V. If this CPU get over 80 degrees and I have set an 80-degree thermal limit I could theoretically lower my CPU to 4.7GHz at 1.3V, which should lower the system's thermal load. Once the system is under a less strenuous load and the CPU then hits a core temperature of 50 degrees, then the CPU will return to its original overclock of 5GHz at 1.35V. 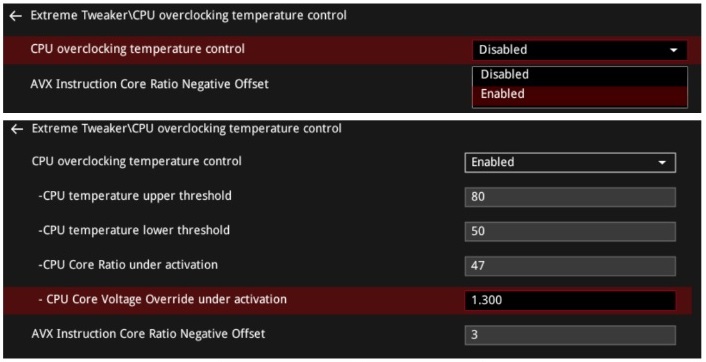 When it comes to overclocking, PC builders are always best off setting their own manually. After all, every CPU is different, a unique snowflake that users will only get the best performance out of after some time and effort in the BIOS setting up optimal voltages and other settings.

Sadly, not everyone has the time to set up a manual overclock, which is why simple "one click" solutions exist, giving users the option to use ASUS made parameters which were created to get 80% of Kaby Lake K-series CPUs to 5GHz, which is a clock speed that everyone should be impressed with.

The downsides of "one-click" overclocking are clear, as it still requires stress testing from the user to ensure stability, is not guaranteed to work on all Kaby Lake K-series CPUs and is using voltages that may be much higher than your CPU actually requires.

When overclocking one thing must be remembered, if you can run your CPU at lower core voltages you achieve lower power consumption and thermal output, both of which are very important factors if you want to minimise your electric bill or lower your CPU temperatures.

Over the next month, we have plans to create a comprehensive Z270/LGA 1151 overclocking guide, giving beginners a great place to learn the basics of overclocking and more experienced users an in-depth look into this new platform.

You can join the discussion on ASUS' Kaby Lake 5GHz overclocking profile on the OC3D Forums.

NeverBackDown
And if you are not in the 80% but the 20%, what happens thenQuote

Greenback
putting a 360 and a 120 rad in a water loop to keep it cool should be enough, it worked for my 2500kQuote

todoralexandrov
Calling a 5GHz overclock phenomenal seems exaggerated. It's just 11% over the 4.5GHz. Guess I'll wait for the Ryzen.
Quote

AlienALX
Quote:
You get screwed.Quote
Reply