Have you ever gotten a PCIe card stuck on a motherboard? Perhaps a graphics card with a thick backplate covers your PCIe slot's release mechanism or other PCIe-connected components that make accessing your PCIe slot's release mechanism more challenging. Either way, sometimes it's hard to remove PCIe cards, making hardware replacement more of a chore than it needs to be. Presenting, ASUS' new Q-RELEASE feature.

Leaked images from ASUS' ROG Z690 motherboard lineup (via Videocardz and @momomo_us) have revealed a new motherboard feature designed to make the removal of PCIe cards easier. With a simple button push, you can safely remove your graphics card from your PCIe slot, negating the need for tools or awkward hand placements.

Have you ever tried to remove a GPU when you have a large heatsink installed? If you have, you will see the benefits of Q-RELEASE. As someone who frequently benchmarks hardware, the appeals of Q-RELEASE are hard to understate. If you need to test 10 or more graphics cards, easily removing and replacing those graphics cards is a huge luxury. No more searching for tools that can push down your PCIe slot latch; just press a button.

While I understand that this tool has a niche appeal, luxuries like this help make high-end motherboards more appealing than their lower-end counterparts. It is also an exclusive feature that ASUS can use to differentiate itself from its competitors. 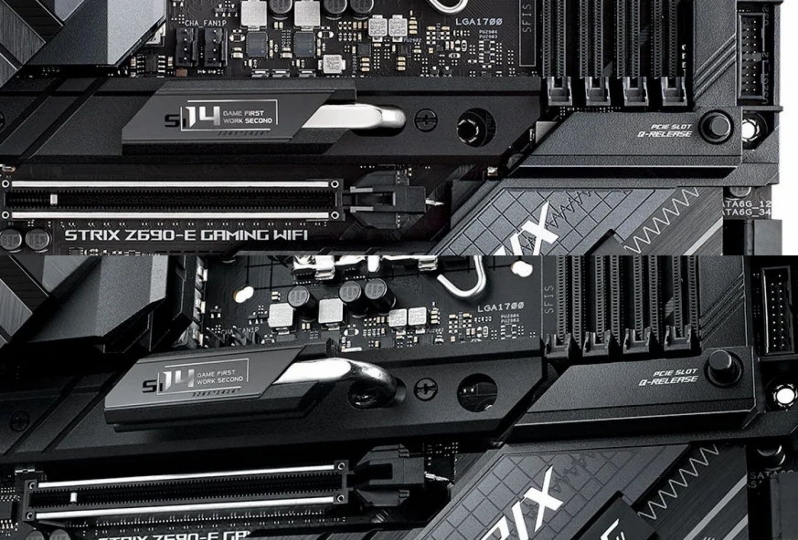 You can join the discussion on ASUS' Leaked Q-RELEASE feature on the OC3D Forums.

Bagpuss
Finally, I can use my plastic chopsticks for their intended use!

This is a real issue, my Dark Rock 4 cooler makes accessing the release latch on the socket impossible by hand, there is only about a half inch gap between the cooler and GPU backplate (or fan with my 3080)..


So yeah, more manufacturers should do this 'cus as much as I want it, I'm not paying the ridiculous ASUS tax to get it.


Took the loons long enough; I can't remember when I last took a card out of a board easily.


... I won't be surprised if they don't claw the bad will back with some peice of new egregious stupid though.Quote

Peace Đ
But, can the mechanism fail after some time and wear out?


It's a cool feature that some people don't know they needed. I'd like to see it on OEM mobos as well, please! Especially in Dell PCs, their blue latches tend to break off pretty easily 😅Quote

Warchild
Quote:
Do you ever post anything positive at all that doesn't include an insult in some form or other?

I have never seen a need for this feature until now. PC gaming has boomed in such a way that thousands upon thousands are now making attempts to build their own, or enter watercooling etc.

You could say up to now the mainstream user would plug n play and leave it at that so very VERY rarely would remove the card once again. Its a definite welcome feature though.

What I would love to see though, is a unified hole on all boards that acts as a passthrough for a reinforced bar that would be used as GPU support. It could screw directly into the mobo tray and prevent GPU sag without bulky GPU supports attached to the rear brackets, or GPU support stands taking up space inside the case.


edit*
Just realised... Picture says Game first, work second. Do you think I can use this as an excuse to my boss next time she complains? "the motherboard told me to change my priorities, wasnt my fault the report isnt ready"

AlienALX
I've needed this loads of times. Not a lot, but yeah. Especially due to the fact that I usually buy high end boards and they usually have lots of cooling above the slot, meaning once the GPU goes in you can't access the release mech.

That said unless it's a serious fiddler rig like my Alienware on water then I really don't see me using it that much. Especially now that GPUs are like rocking horse poo, so the chance of changing one out is becoming increasingly thin.

And at this new trend in pricing? that just gets thinner. Especially because so far "next gen" games have done absolutely nothing to worry me whatsoever.

With Pascal, IMO, Nvidia released too much power. If you have a high end Pascal or Turing card there is absolutely no point in buying any of the 30 series.Quote
Reply