These specifications are truly heroic

During AMD's latest Meet the Experts event, the company showcased a number of new motherboards from their partners. All of these motherboards are new AM5 designs, all of which are compatible with PCIe 5.0 devices, DDR5 memory, and AMD's next-generation Ryzen 7000 series processors.

On the rear I/O of the X670E Hero are two USB4 ports, nine USB 3.2 Gen 2 ports, a single USB 3.2 Gen2x2 ports, and HDMI output, a 2.5Gb ethernet port, and Wi-Fi antennas for WiFi 6E. Alongside these inputs/outputs are a standard selection of audio jacks, a BIOS flashback button, and a clear CMOS button.

To add extra wow factor to this motherboard, ASUS has added their Polymo Lighting to their X670E Hero motherboard, a large number of Addressable RGB headers, and the company's latest SUPREMEFX ALC4082 CODEC audio hardware. For most users, this hardware should be more than enough to handle any use case that you can throw at it, assuming that ultra-advanced features like 10Gb Ethernet are not a must for you. 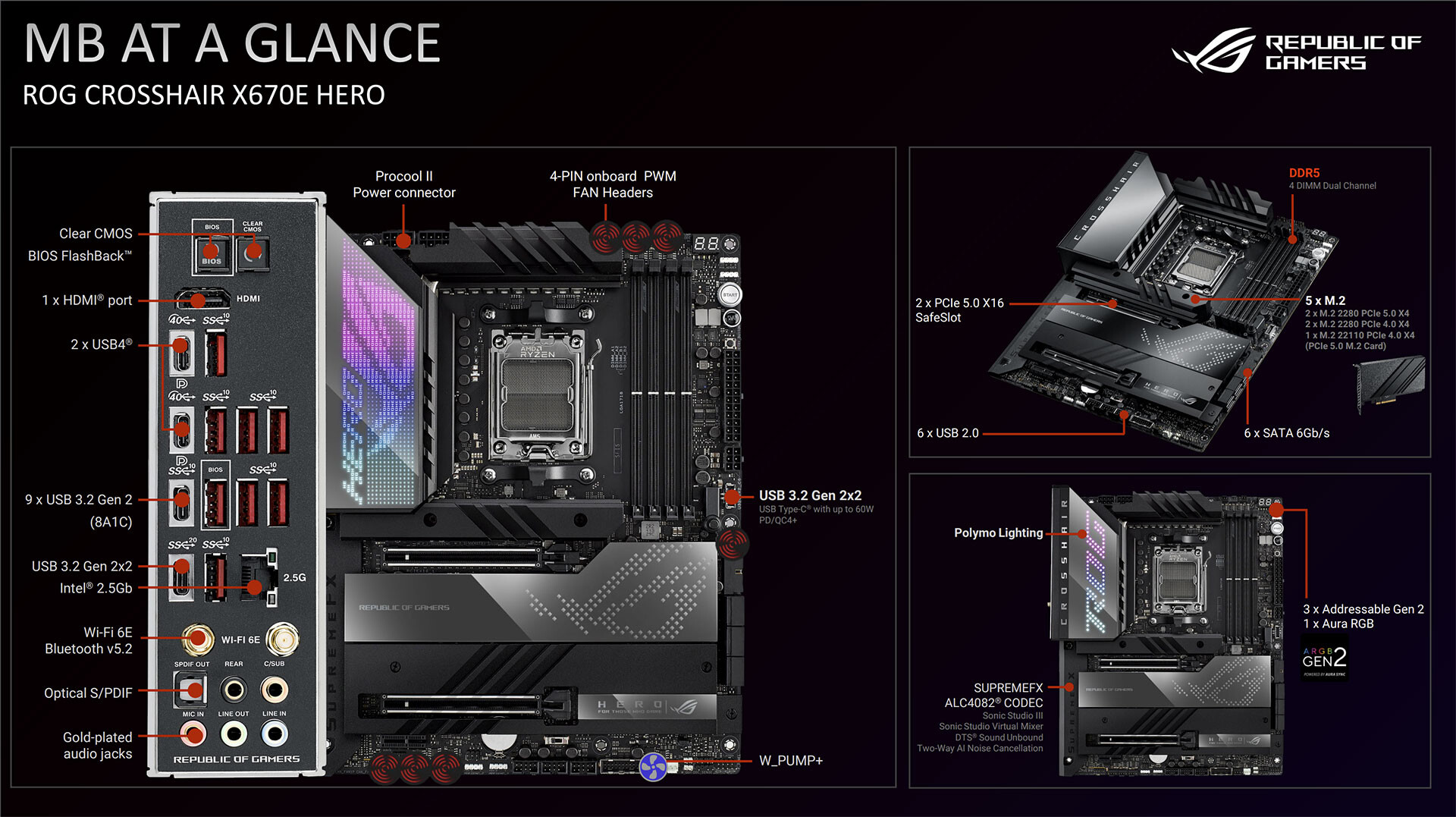 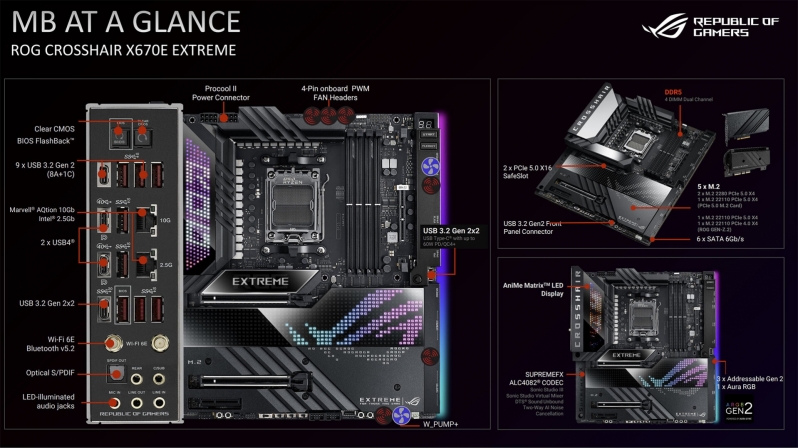 You can join the discussion on ASUS' ROG Crosshair X670E Hero and X670E Extreme AM5 motherboards on the OC3D Forums.

robbiec
Interesting that they gone X6 on USB 2.0 internally - useful for an Aquacomputer addict like me. Can't see a TPM header though, which I'd find a bit disappointing if missing (possibly one above the first PCIe slot).
Solid offering.Quote

66racer
All those USB ports! I just hope their ProArt board has a lot more PCIe slots than this one.Quote

Gothmoth
i get that gamer are maybe happy with only 2 PCIe slots but i need at least 3.

meuvoy
Quote:
I'm guessing both these expansion cards are PCIE-E x2 or x4? Both of these moterhboards do have a third PCIE slot, the marketing image states it's 2x PCI-E 5.0, if you look at the pictures though, you'll see there's an aditional x4 slot on the bottom that I assume is either 4.0 or 3.0 and thus isn't accounted for, in the "X amounts of PCIE5 slots" marketing statement.

And yeah, I feel you, but honestly, I see most of the expansion things going external via USB, that's so high speed nowadays, I've persoanlly switched my PCI-E soundcard for USB external DACs, they end up making much more sense I don't need to buy expensive motherbaords just so I have 3 accessible PCI-E slots for GPU, Soundcard and Network card, and I reckon I will eventually buy an USB network card as well, Just the fact I can easily swap systems, use it on laptops, or even tablets/smartphones if I ever feel like doing that is worth it. USB is finally achieving it's potential and I for one think it's beautiful. Just buy one USB thing and carry it to whatever system you want not needing to worry about compatibilityQuote

Avet
Yea for gaming this much slots is fine. But ProArt boards need to have 4 PCIe 4X slots instead 4 m.2 slots. You can plug m.2 SSD with an add in card, but putting addin card in m.2 slot is a pain. And for most PCIe expansion cards (capture, network, audio, etc) 4X is plenty.Quote
Reply