Introducing the stunning Plasma Copper color scheme, ASUS ROG's Global Marketing Director, Derek Yu, said: "To be ROG is to be the rebel. To be ROG is to break every rule. We are rebellious ROG, breaking our own rules to envision a new future. A future forged with striking distinction. ROG is red. ROG is black. And now ROG is also Plasma Copper: elite assemblies for elite gamers. This is our mark of invincibility - and the new emblem of dominance for the world's best gamers." 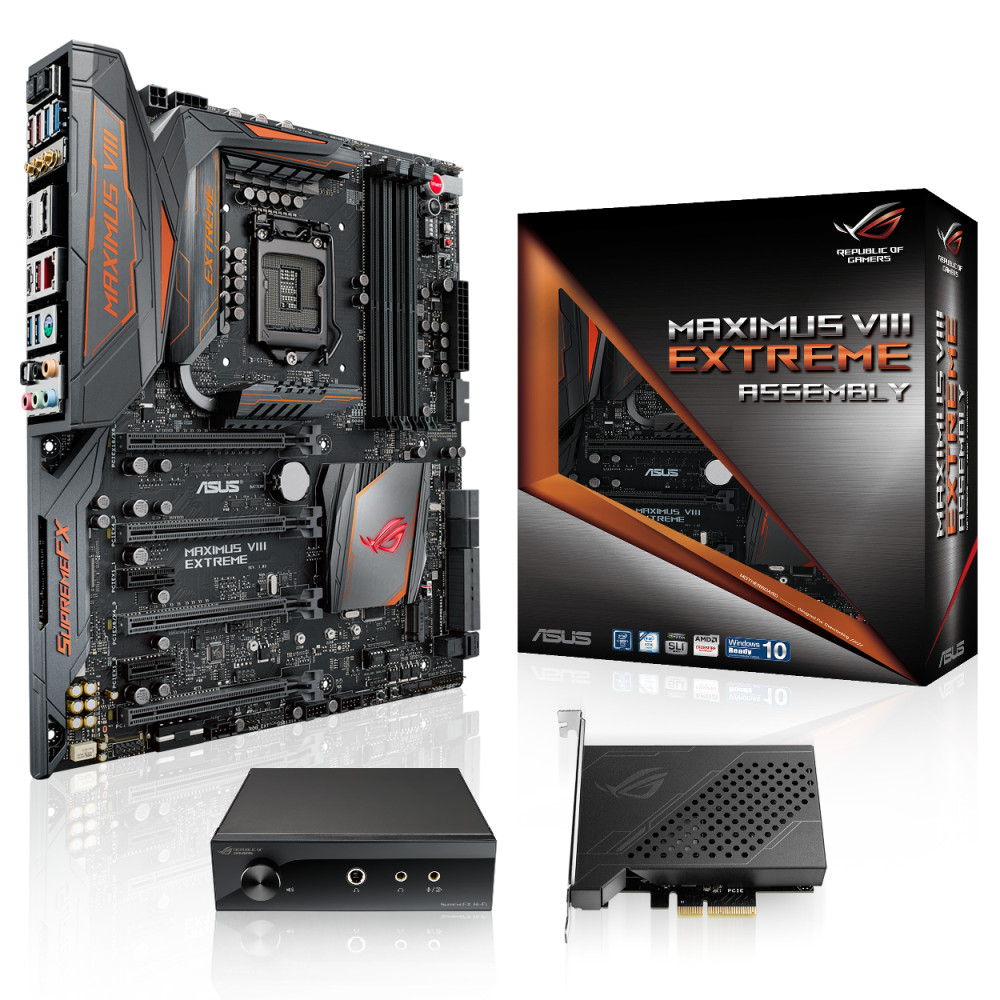 SupremeFX Hi-Fi is the front-panel headphone amp that delivers sound exactly how the studio intended - pure, unadulterated audio straight to the listener's ear, whether they're streaming or gaming. The ESS ES9018K2M digital-to-analog converter (DAC), dual Texas Instruments LM4562 op-amps and TPA6120A2 headphone amp work in harmony to faithfully reproduce every detail without distortion or jitter, delivering audiophile-grade 32-bit/384kHz and DSD128 playback, and output of over 6VRMS to 600ohm headphones.

SupremeFX Hi-Fi has a Cirrus Logic analog-to-digital convertor (ADC) for exceptional recording quality and, when excitement over accuracy is the order of the day, ROG's Sonic Studio suite enables the listener to apply endless audio enhancements. 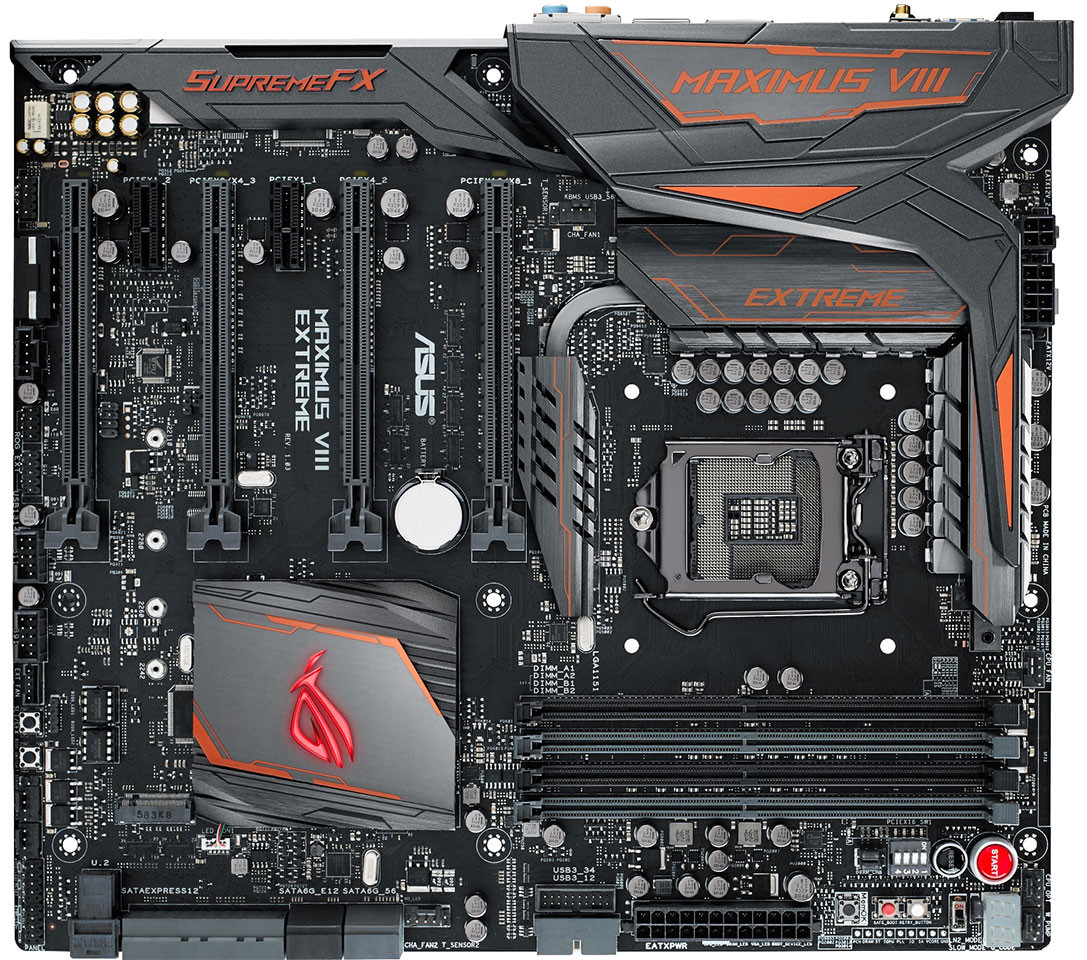 ROG 10G Express is the enterprise-speed Ethernet card, powered by Aquantia and Tehuti Networks: these key partners are both members of the NBASE-T alliance, and are working closely to create the new 2.5Gbit/s and 5Gbit/s standards that will be compatible with the existing Category 5e (Cat 5e) cabling and ports. With PCI Express 2.0 x4 speed, it equips Maximus VIII Extreme/Assembly gamers for next-generation LAN speeds of up to 10Gbit/s - or up to ten times (10X) faster than today's fastest onboard consumer Ethernet.

Maximus VIII Extreme/Assembly is engineered with the revolutionary NVM Express (NVMe) U.2 connector on board to unleash the full potential of the latest SSDs - with speeds of up to 32Gbit/s.

The new motherboard also has the latest USB 3.1 Gen 2 connectivity for speeds of up to 10Gbit/s, or twice (2X) as fast USB 3.0, and includes three Type-A ports for great backward-compatibility and one reversible Type-C (USB-C) connector for convenience, ease and future-proofing. 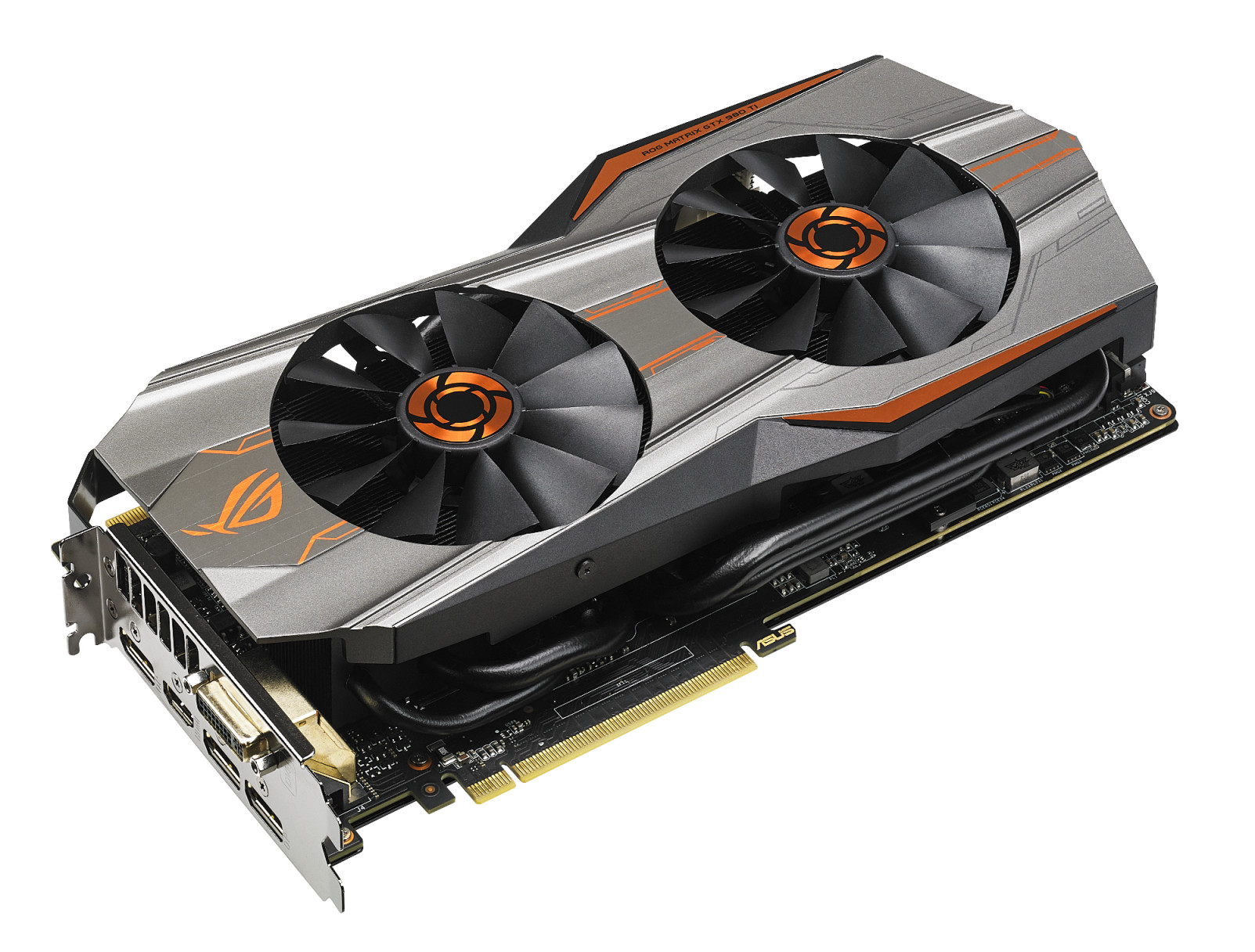 ROG's new Matrix GTX 980 Ti is powered by the latest GeForce GTX 980 Ti graphics-processing units (GPUs), each of which is individually tested by an ASUS-exclusive GPU-sorting system to assess its overclocking potential - with only the very best GPUs selected for inclusion on Matrix GTX 980 Ti. Only the very best GPUs that rank in the top 15% of those tested are reserved for use in the ROG Matrix. This fanatical attention to detail and commitment to quality results in a graphics card that offers gamers and overclockers extreme performance and overclocking stability. ROG Matrix GTX 980 Ti delivers up to 18.7% faster performance than reference cards and 21.6% faster in The Witcher 3: Wild Hunt.

Matrix GTX 980 Ti also has many advanced and exclusive hardware and software features designed to make overclocking as simple and safe as possible. Memory Defroster quickly defrosts the graphics card's memory during below-zero overclocking to ensure sustained stability. A Safe Mode that allows users to overclock with complete confidence, as a single button push will restore default BIOS settings instantly. Extreme overclockers will also appreciate the liquid-nitrogen (LN2) jumper switch as it enables even more overvolting options, allowing the most adventurous users to unleash maximum greater power from their graphics cards.

You can join the discussion on ASUS' Extreme-Assembly GTX 980Ti Matrix and Z170 Maximus VIII Extreme on the OC3D Forums.

RandomBadger
Those would work well in a black case with those orange and black noctua fans.... If only I had the dolla dolla.Quote

Excalabur50
Really nice to see another black and orange theme and matching GPU, whilst being tastefully done well done AsusQuote

Doomslayer
The Motherboard is nice but that's cause i'm a ASUS fan boy but it would have been nice if the ROG Logo was Orange to begin with.Quote

Oseth
Looks like an excellent combo but that red ROG logo is throwing stuff off.Quote
Reply