AMD's due to reveal their Ryzen 7000 series processors later this month, showcasing the power of their Zen 4 architecture in all of its glory. Alongside AMD's next-generation Ryzen processors will come a new generation of motherboards, products that will support DDR5 memory, PCIe 5.0 connectivity, and many other new features that the company's older AM4-based X570 series motherboards lack.

ASUS has now showcased some of their higher-end AM5 series motherboards, X670E series designs that include broad support for PCIe 5.0 connectivity, a large number of M.2 slots, WiFi support, and robust VRMs for CPU overclocking.

In the press release below, ASUS has detailed their Republic of Gamers Crosshair X670E Hero, their ROG Strix X670E-E Gaming WiFi, and their TUF Gaming X670E-Plus WiFi motherboards. These motherboards will be available when AMD launches their Zen 4 Ryzen 7000 series processors and Am5 motherboard platform. 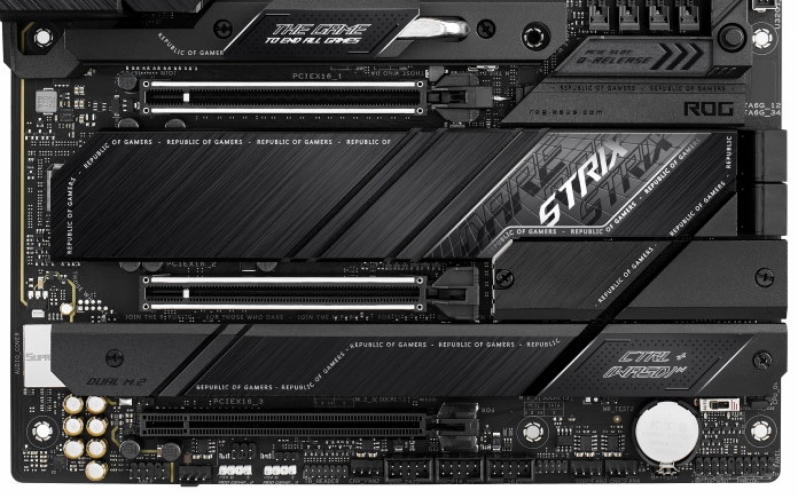 For this next generation of motherboards, we’re raising everything to the power of five: DDR5 RAM support and PCIe 5.0 connectivity come standard on our X670E motherboards.

The ROG Crosshair X670E Hero, the ROG Strix X670E-E Gaming WiFi, and the TUF Gaming X670E-Plus WiFi let you enjoy the massive bandwidth, sizzling new speeds, and exceptional power efficiency offered by next-generation DDR5 RAM. With data rates 50% faster than previous-generation DDR4 memory, DDR5 unleashes a new tier of performance, and these motherboards have a host of hardware and firmware optimizations that enable users to overclock capable kits to the absolute limit.

PCIe 5.0 connectivity empowers you today with a comprehensive selection of high-speed ports, and it’ll give you access to the fastest next-gen SSDs and GPUs as they hit the market. With double the link speeds of PCIe 4.0, the new standard provides us with the bandwidth to deck out these boards with USB 3.2 Gen 2×2 ports—and a pair of USB4® ports on the ROG Crosshair X670E Hero.

Since so many gamers use their PC’s front panel USB ports connect fast external storage, these motherboards offer a front panel USB 3.2 Gen 2×2 connector. Need those ports to rapidly recharge your other devices, as well? Pair the X670E Hero board with a case featuring a front-panel USB Type-C port so that you can have convenient access to 60W charging through Quick Charge 4+.*

Exclusive ASUS Q-Design innovations make sure that building and customizing a high-end gaming PC has never been so easy. Both the ROG Crosshair X670E Hero and ROG Strix X670E-E Gaming WiFi include the PCIe Q-Release button. Today’s cutting-edge graphics cards often have beefy cooling solutions and sturdy backplates. That’s great for performance—but they can get in the way of popping the PCIe release latch free. Our PCIe Slot Q-Release button lets you release your graphics card from the slot with one press, no fumbling or tiny fingers required. 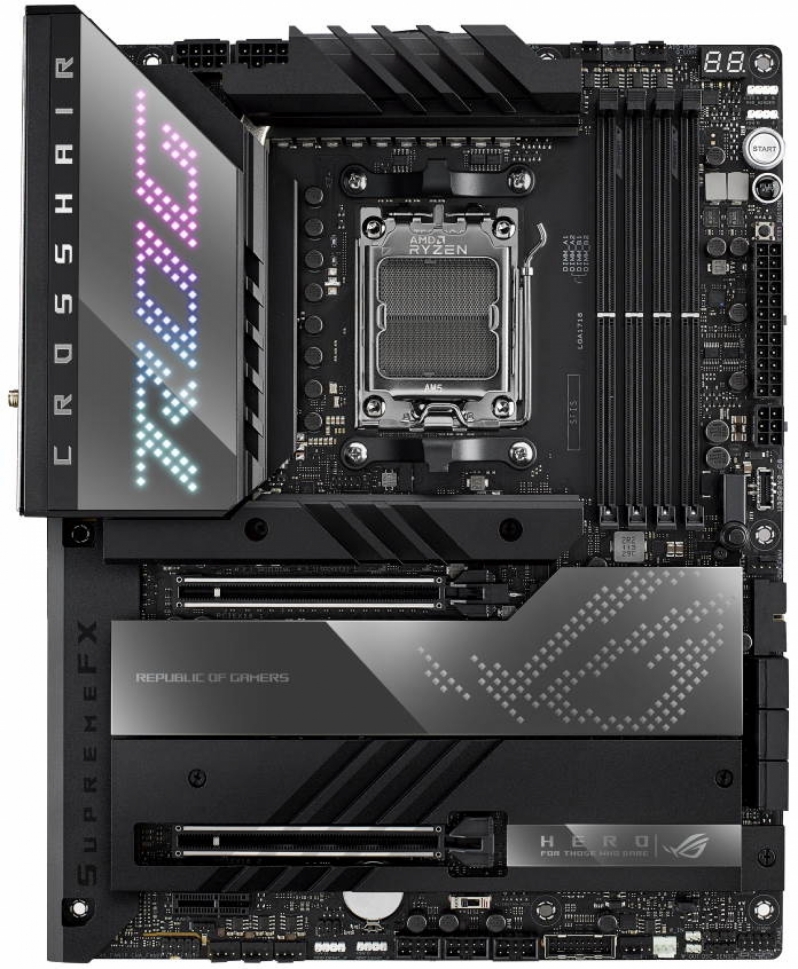 Similarly, traditional DIMM slot designs require you to lock in both sides of the memory stick, and it wasn’t always easy for those of us with larger fingers to unlock the latch closest to the graphics card. That’s why we’ve also implemented our single-sided Q-DIMM latching design on all three of these X670E motherboards. With this arrangement, you won’t have to worry about a latch that may be too close to your graphics card. A single latch on the easier-to-access side of the DIMM slot is all it takes to hold your memory stick firmly in place. Installing your RAM—and upgrading it down the road—is that much easier.

We’ve even simplified the process of installing an M.2 drive. Our M.2 Q-Latch gives you the peace of mind that you’ll never have to handle another tiny, easily lost M.2 screw ever again. Now, you can secure or loosen an M.2 drive with just your fingertips.

Dark hues predominate the surface of the ROG Crosshair X670E Hero, providing an intense backdrop for your build. Polymo lighting across the integrated I/O shield delivers a sizzling accent. This microstructural array of light and color features two RGB patterns, empowering builders to show off a luminous RGB style that they won’t see anywhere else.

Ready to take one of AMD’s new chips to the next level? With its 18+2 teamed power stages rated for 110A, this motherboard will effortlessly deliver copious amounts of stable power to your CPU. Substantial integrated heatsinks keep the circuitry cool, and a wide array of headers let you set up your dream cooling solution.

The ROG Crosshair X670E Hero sets you up for a thoroughly next-gen gaming build. Its pair of PCIe 5.0 x16 slots stand ready for next-gen graphics cards–or the included PCIe 5.0 M.2 card, which gives you a third M.2 slot, in addition to the two onboard slots, that are wired for PCIe 5.0 connectivity. Enjoy pristine audio for competitive gaming and entertainment alike with an audiophile-grade ESS ES9218PQ Quad DAC that pumps top-notch audio to the front-panel output. With an exceptional signal-to-noise ratio, this audio solution is perfect for plugging in a high-end headset. 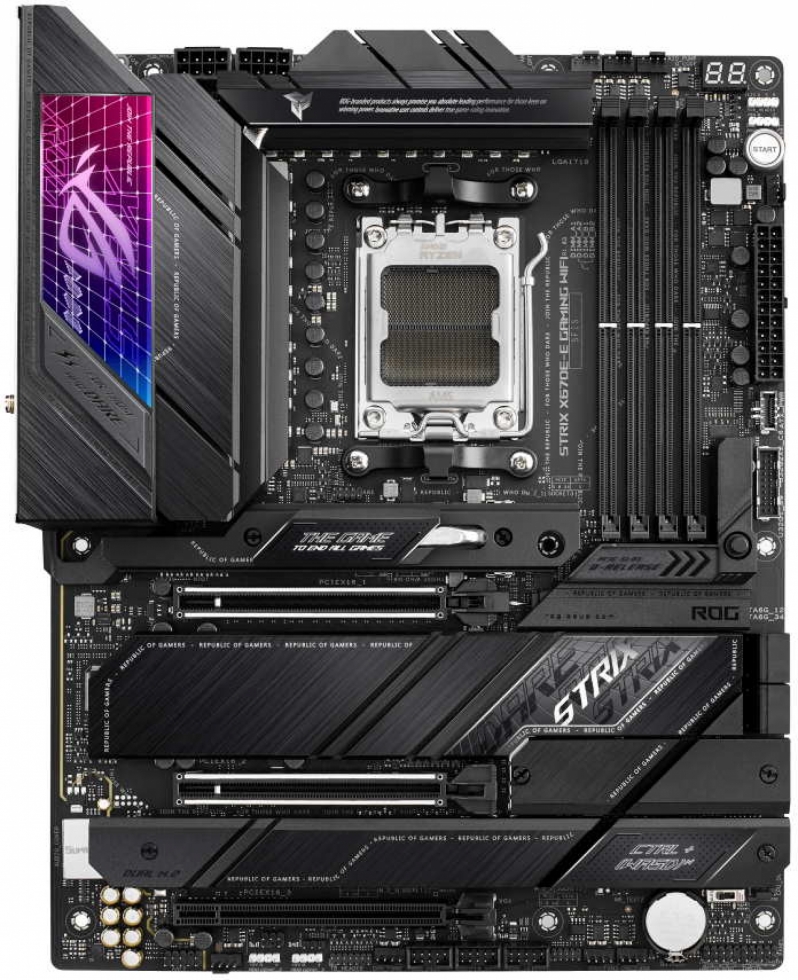 ROG Crosshair motherboards deliver the best that the X670E has to offer, and ROG Strix boards take that basic DNA and offer it in more attainable packages that balance exceptional gaming performance with striking style.

The ROG Strix X670E-E Gaming WiFi merges the best of form and function. Angular accents sweep across the board’s heatsinks alongside distinctive ROG iconography, while an illuminated acrylic display on the integrated I/O shield makes an impactful statement.

Comprehensive power and thermal solutions set you up to tame the latest high-end gear. 18+2 teamed power stages rated for 110A deliver a stable stream of power to your AMD CPU. To keep PCIe 5.0 SSDs operating comfortably, the hefty and thick combo-sink M.2 heatsink provides a large surface area for cooling. And a massive bundled PCIe 5.0 M.2 heatsink is included in the accessory kit.

A new generation of conveniences ease the building process with the ROG Strix X670E-E Gaming WiFi. In addition to the PCIe Slot Q-Release button, which makes it easy to remove the graphics card, there’s an integrated power button on the motherboard that makes it easy to do a pre-test prior to building the whole system. And spare M.2 thermal pads in the ROG accessory kit make sure that you’re ready to keep future replacement drives operating optimally. 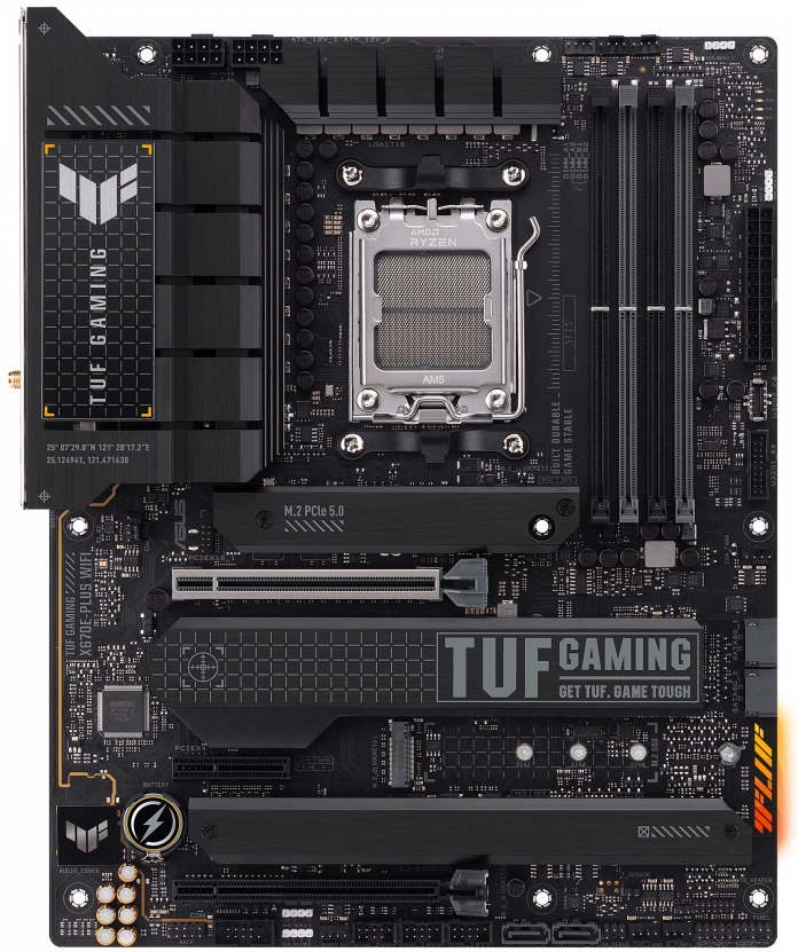 The TUF Gaming lineup delivers the performance you need in designs that communicate durability and practicality. The TUF Gaming X670E-Plus WiFi equips you to outpace the competition with its comprehensive feature set and sturdy good looks.

This board’s no-frills aesthetic starts with simple, clean lines and unobtrusive gray hues that make it easy for you to coordinate the look of your build. Badges on the integrated I/O shield and across the board provide understated accents.

The TUF Gaming X670E-Plus WiFi shares many of the same next-gen features as the higher-end ROG Crosshair and ROG Strix boards. A PCIe Gen 5.0 x16 slot lets you install the highest-end graphics cards of today and tomorrow. A total of four M.2 slots, one wired for PCIe 5.0, two for PCIe 4.0, and one for PCIe 3.0, let you set up a spacious and speedy storage system. And it includes a wide array of Q-Design features, including the intuitive Q-LED diagnostic array that gives you at-a-glance information on the status of your build.

Between August 19th and August 21st, we’ll be showing off these new X670E motherboards at the Canadian National Exhibition in Toronto, Canada. Join us at our booth to be one of the first to see these boards in person–and also get an up-close look at even more ROG gear.

Even if you can’t make it to Toronto, there’s more information on the way. At the Gamescom event on August 24th, we’ll have even more motherboards to introduce, and we’ll have ASUS-exclusive features to explore as we get closer to the full launch of these boards and AMD’s next-gen CPUs.

*To support 60W, please install the power cable to 6-pin PCIe Graphics Card connector or can only support 27W.

You can join the discussion on ASUS' X670E Hero, Strix, and TUF Gaming motherboards on the OC3D Forums.

robbiec
I think I'm going to be disappointed by the Asus Crosshair X670E because it is missing one little feature, a TPM port. I can see it on the Strix, but not the Crosshair or the TUF which is weird.Quote

AlienALX
Quote:
I don't understand why any modern board would have the socket when it should be built into the board.

From what I remember TPM sockets were on boards ages ago when it was rumoured. From there it was put into the board.Quote

Dicehunter
Quote:
You can format and reinstall Windows 11 in less than 10 minutes, Spend maybe 2-3 hours setting up all the settings, Various programs etc... much less of a headache than migrating your Windows install between platforms which will likely cause various issues.Quote

AlienALX
Yeah gotta say Win 11 is incredibly quick to get installed and set up tbh.Quote
Reply