BIOSTAR has become the newest motherboard manufacturer to join this trend, pledging to support "3rd Gen Ryzen CPUs" on their AM4 300 and AM4 400 series motherboards, which includes A320 mainboards. Strangely, BIOSTAR has not limited their support plans to Ryzen 3000 series APUs exclusively, at least according to their press release. Will they backtrack on their A320 support comments? Who knows.

Below is a list of motherboards which BIOSTAR plans to make compatible with AMD's 3rd Generation Ryzen processors through new BIOS updates.

BIOSTAR, a leading manufacturer of motherboards, graphics cards, and storage devices offers peace of mind for its customers, announcing the BIOSTAR AMD AM4 300-series and 400-series motherboards will be compatible with upcoming 3rd Gen AMD RYZEN CPUs. BIOSTAR’s engineering team have been working relentlessly prior to the availability of the upcoming CPUs to ensure BIOSTAR products keep their promise of ensuring customers get the best value without worrying about future upgrades. 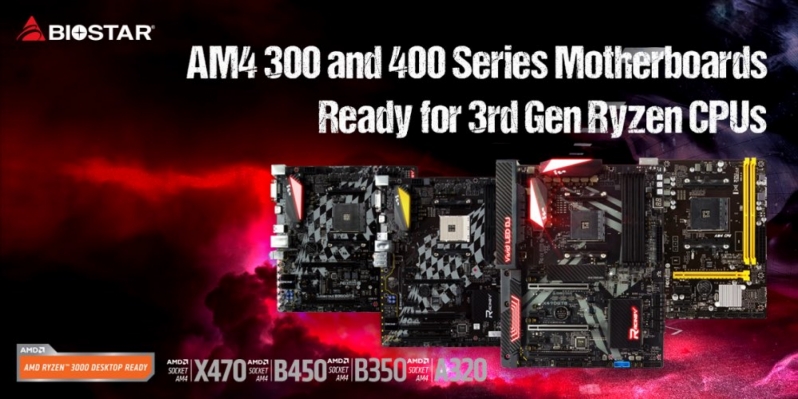 You can join the discussion on BIOSTAR's plans to support AMD's 3rd Generation Ryzen CPUs on their existing AM4 motherboards.

demonking
It'll be interesting to see if this is a error or if the other manufacturers are choosing not to support them.Quote

grec
Some manufacturers might just have cut a few too many corners with all their A320 boards tbf, Biostar has at least a couple of relatively well spec'd out A320 models.Quote

NeverBackDown
Only APUs for A320. Nothing really earth shattering.Quote
Reply