Has the golden age of delidding returned?

Using a custom delidding tool for AMD's new Ryzen 7000 series processors, der8auer has managed to remove the IHS of a Ryzen 9 7900X processor without damaging the processor or any of its components. By doing this, der8auer is able to directly connect a liquid cooling setup to the dies of his Ryzen 9 7900X using a new liquid metal thermal interface material. This lowers the load thermals of AMD's Ryzen 9 7900X by allowing heat to directly move from his processor's silicon and into his custom liquid cooling setup, allowing heat to be transferred away from the processor more efficiently.

Using his delidding tool, der8auer has managed to lower the load thermals of his Ryzen 9 7900X by 18-21 degrees. Furthermore, this thermal headroom has allowed him to overclock his Ryzen 9 7900X to higher all-core frequencies. With these lowered thermals, der8auer expects to achieve even higher performance levels by overclocking Ryzen 7000 CPUs with higher voltages. With these lowered thermals, we expect Ryzen 7000 series delidding to be very popular amongst overclocking enthusiasts.

Simply put, the thermal drops seen below are staggering. A 20-degree drop is huge, and we can expect hardware enthusiasts to find other ways to increase the overclocking potential of AMD's latest processors. 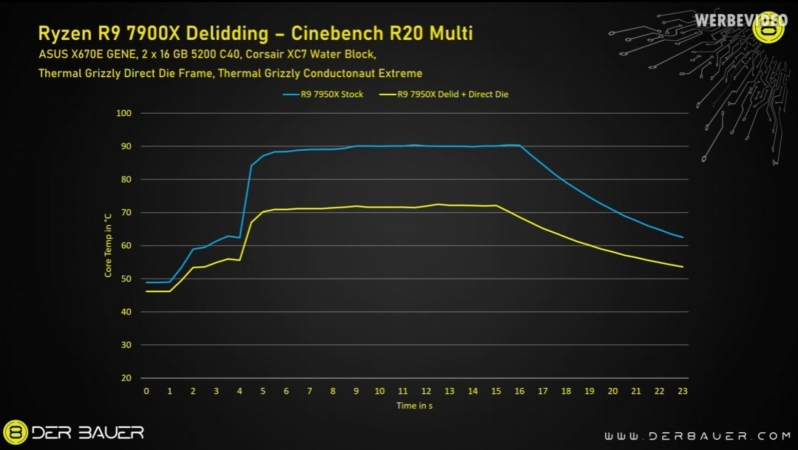 You can join the discussion on der8auer's Ryzen 7900X delidding success on the OC3D Forums.

AngryGoldfish
Quote:
Why do you feel that the current Zen 4 line-up are not 'real', so to speak?Quote

AlienALX
Quote:
I feel the same way. AMD designed something marvelous and instead we got over priced furnaces.

It just all feels a bit half assed. Worst Ryzen launch yet imo.Quote