This tool may be a must for hardware Alder Lake overclockers

Intel's LGA1700 CPU socket has a problem, it's latching mechanism puts uneven pressure on their 12th generation Alder Lake processors and causes their CPUs to bend when mounted. This results in uneven contact with CPU heatsinks and sub-optimal cooling, that said, Intel does not see this issue as a problem.

Below is what Thermal Grizzly has to say about their CPU Contact Frame.

The standard Integrated Loading Mechanism (ILM) has contact points that are in the middle of the elongated CPU. The surface of the Integrated Heatspreader (IHS) curves concavely due to the resulting uneven contact pressure of the processor in the socket. As a result, the base plate of the CPU cooler rests primarily on the edges of the IHS, so that the thermal "hotspot" in the center of the CPU is not optimally covered.

The Intel 12th Gen CPU Contact Frame has a special inner contour to shift the contact pressure from the center of the CPU to the edges during assembly. This avoids the concave curvature of the IHS. As a result, the CPU cooler rests better on the processor and a larger contact surface is created to dissipate the waste heat of the CPU. 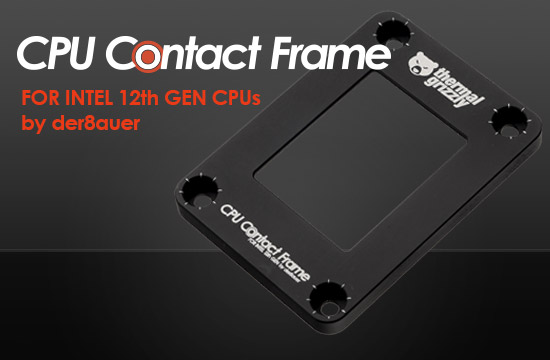 Alongside their CPU Contact frame for Intel Alder Lake processors, der8auer and Thermal Grizzly have also created a CPU lapping solution for Intel's Generation Alder Lake processors. What is CPU lapping? It's a process where overclockers sand down the top layer of their CPU's IHS to make it thinner and flatter. This process can improve the contact your processor makes with your CPU cooler and improve its thermal performance. This process can reduce the load temperatures of your processor by a few degrees.

der8auer/Thermal Grizzly's Alder Lake lapping solution does two things. Firstly, it allows users of their CPU contact frame to lap their processors in a pressurised/mounted scenario (the same conditions as if it were on a motherboard), and allows novice CPU lappers to do so safely (with minimal risk of lapping your CPU too much).

Please note, that lapping your processor will void your CPU's warranty and you risk damaging your CPU while lapping it. Please note that der8auer's Alder Lake CPU contact frame and lapping kit are separate products.

You can join the discussion on der8auer/Thermal Grizzly's CPU Contract Frame for Intel 12th Gen CPUs on the OC3D Forums.

If he does he killed me last night lmao