AMD's Ryzen 7 5800X3D is due to launch on April 20th. The processor will be the first product from AMD to utilise the company's 3D V-Cache technology within the consumer PC market, arriving as a new Zen 3 processor that is optimised specifically for gaming workloads.

XanxoGaming is the first website to get their hands of AMD's Ryzen 7 5800X3D processor, and have benchmarked the new processor using Shadow of the Tomb Raider in collaboration with CapFrameX. So far, AMD's new flagship gaming processor has delivered impressive results, outperforming Intel's i9-12900K and i9-12900KS with relative ease.

Shadow of the Tomb Raider was benchmarked using a custom in-game scene at 720p using game settings that minimise GPU load while maximising CPU load. These settings include Ultra detail settings and Ultra shadow settings to stress the system's CPU and memory, with GPU-focused settings like AF, AA, AO and post processing being set to their minimum settings.

Using these custom settings, AMD's Ryzen 7 5800X3D achieved an average framerate of 231 FPS, whereas Intel's i9-12900KS and i9-12900K achieved average framerates of around 200 FPS and 190 FPS respectively. That said, these performance results were not using "apples-to-apples" PC configurations. 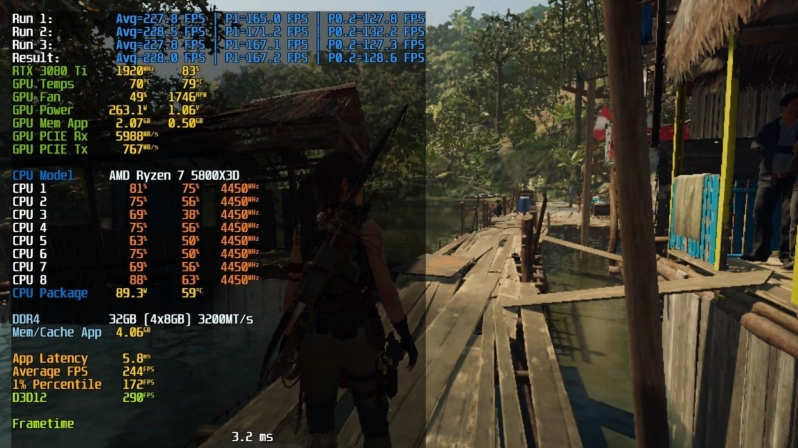 This result is more impressive than you think!

As mentioned above, the results below were not all tested using the same PC setups. The Ryzen 7 5800X3D's results came from a system using an RTX 3080 Ti graphics card and a 4x8GB kit of G.Skill Flare X memory that ran at DDR4-3200 speeds with CL14 timings. In contrast, the Alder Lake powered system used an RTX 3090 Ti graphics card and DDR5-4800 memory with CL40 timings.

The Intel-based system for these benchmarks features a faster graphics card and uses DDR5 memory. Both processors use the fastest memory that they officially support out of the box. That said, both processors can often be used with faster memory kits without any major issues. Ryzen 5000 CPUs often work well with DDR4-3600 memory kits and Intel's Alder Lake CPUs can often run with 6000 MT/s DDR5 memory kits. 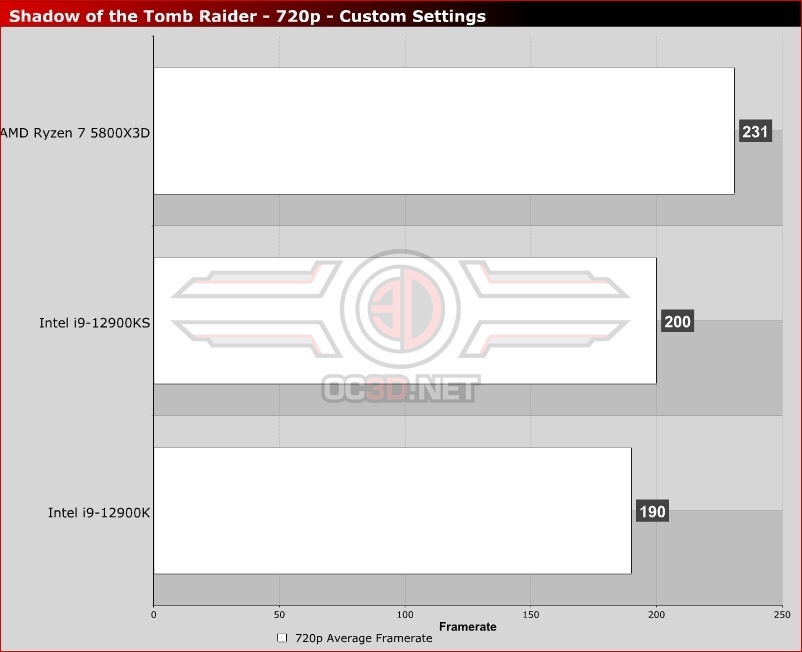 We need to see more tests

While the results above are impressive, they are only representative of AMD's gaming performance in Shadow of the Tomb Raider. It remains to be seen how AMD's new Ryzen CPUs compare to Intel's Alder Lake lineup in other CPU/memory-limited gaming workloads.

You can join the discussion on AMD's early Ryzen 7 5800X3D gaming results on the OC3D Forums.

23RO_UK
Some games prefer memory latency over speed being another factor, whilst this initially looks to be very impressive and bodes extremely favourably for next generation Zen; ultimately, the 5800X3D is the last throw of the dice on what will soon be a previous generation platform (with a speculated retail price tag of £450ish to boot).Quote

Anon
we need a comparison with regular 5800XQuote

Avet
At the moment the performance in games and apps is 6 feet one way half a dozen the other. There are very few edge cases (Threadripper) which is very good. You go through benchmarks and pick a CPU that fits your games best. It is not one CPU to rule them all anymore.
Competition is good.Quote
Reply