An early review of AMD's Ryzen 7 5800X3D has been published

Xanxo Gaming has managed to acquire an early sample of AMD's Ryzen 7 5800X3D processor, allowing them to showcase the CPU's gaming performance across several popular titles. These benchmarks put AMD's new gaming flagship against Intel's i9-12900KF, both of which are using a 4x8GB kit of 3200MHz CL14 DDR4 memory.

Below, we have included some of Xanxo Gaming's results, though more benchmarks are available on their websites. Below, we will highlight some of their 720p gaming benchmarks, as these tests are the most CPU-limited. While no modern gamer is likely to game at 720p, these tests lower the GPU overhead of games as much as possible to ensure that these benchmarks are strictly CPU benchmarks. After all, what point is there in benchmarking a CPU using an application that is GPU limited.

The benchmarks below were tested using an Nvidia RTX 3080 Ti Founders Edition.

While AMD and Intel both create x86 processors, their core architectures are very different. It is hard to create a CPU that wins in all areas, and in today's competitive market, there are areas where AMD are strong and areas where Intel is ahead. When it comes to gaming workloads, every game has a different performance profile and requirements. That means that there will be some games that prefer Intel, and others that prefer AMD. 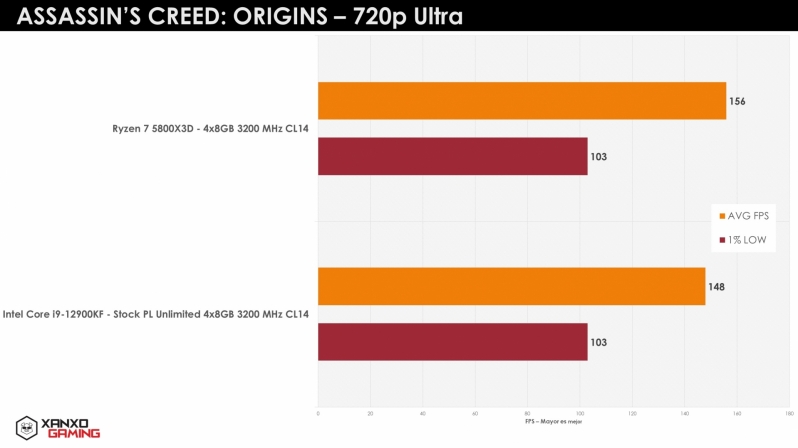 In Borderlands 3, AMD's Ryzen 7 5800X3D is slightly ahead of Intel, with marginally higher average framerates and notably higher 1st percentile framerates. Based on these results, gamers should not notice any difference in Borderlands 3 when moving from Intel to AMD. 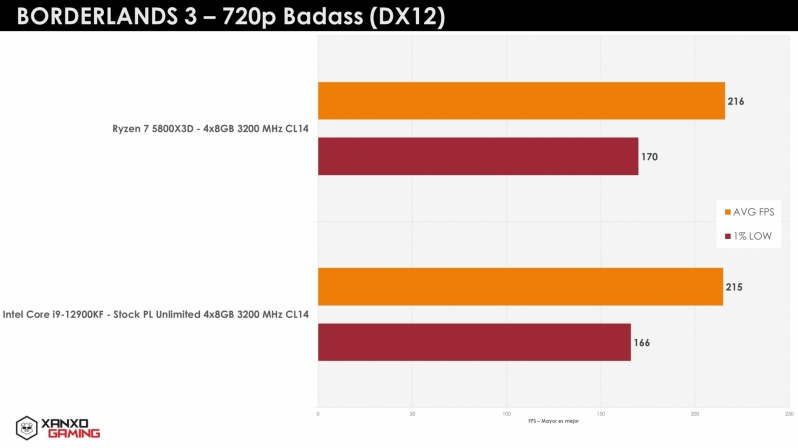 Control is the first game where AMD moves ahead of Intel, with AMD's Ryzen 7 5800X3D delivering much higher 1st percentile framerates. While both processors achieve similar average framerates, AMD's processor experiences smaller performance dips. As such, AMD's performance can be seen as more consistent. 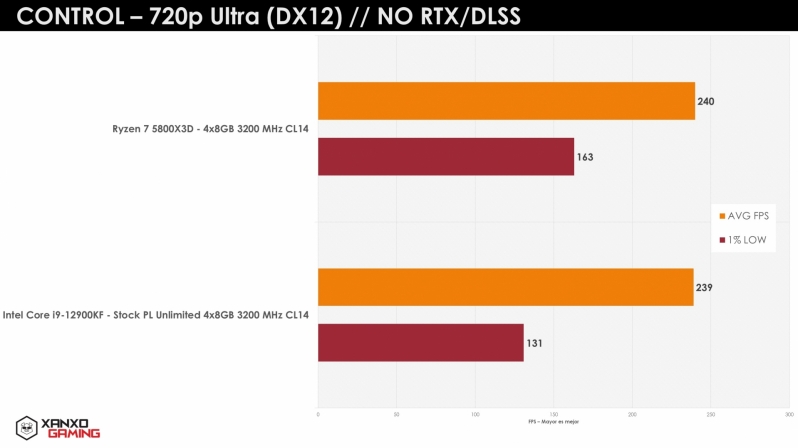 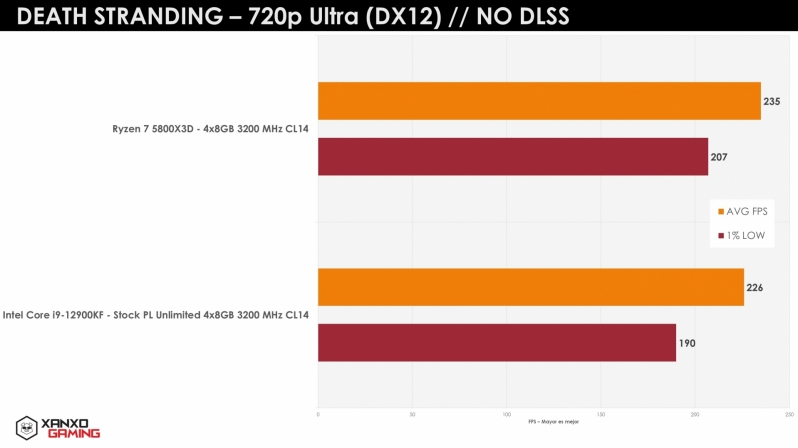 In Middle Earth: Shadow of War, AMD's new Ryzen processor is once again ahead of its Alder Lake rival. Average framerates jump from 219 FPS to 246 FPS when moving from Intel's i9-12900KF to AMD's Ryzen 7 5800X3D. 1st percentile framerates are also an area where AMD is ahead. 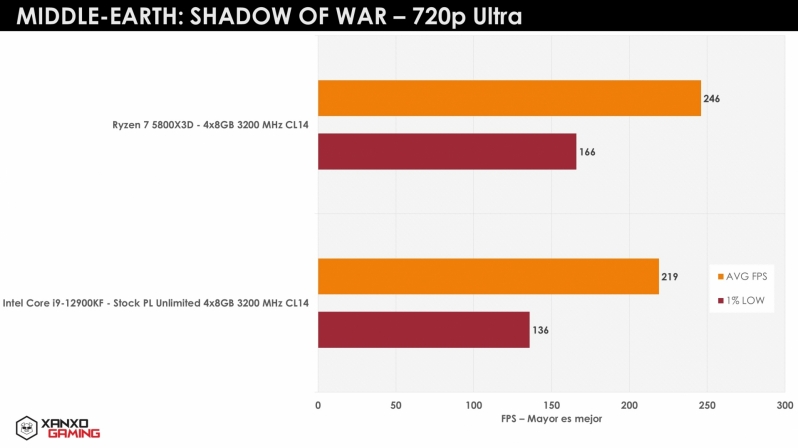 Lastly with The Witcher 3 we can see a huge lead for AMD. AMD's 1st percentile framerates here are ahead of Intel's average framerate. This is a game that loves AMD's V-Cache technology, and is certainly an outlier when compared to the results above. 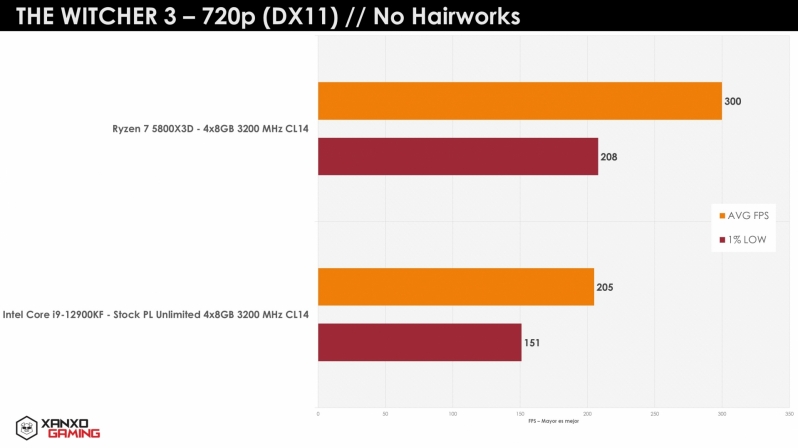 If you look at all of Xanox Gaming's benchmarks, you will see that there are some games where Intel comes out ahead. While the Ryzen 7 5800X3D is a strong gaming processor, Alder Lake remains a strong challenger. There are some games that will prefer one architecture, and some that will prefer the other. As such, there is no "best gaming processor" for all workloads.

One thing that's worth noting here is that neither AMD's Ryzen 7 5800X3D or Intel's i9-12900KF are tested using an ideal memory configuration. Both processors could be tested using faster DDR4 memory modules, and Intel's i9-12900KF could have been tested using DDR5 memory. The tests above are apples-to-apples comparisons using the fastest DDR4 modules that both processors officially supports, with DDR4-3200 memory being the fastest DDR4 memory modules that are supported by both CPUs without being considered "overclocking" by AMD or Intel. In time, we expect other reviewers to conduct testing using both of these processors using faster DRAM configurations.

You can join the discussion on AMD's early Ryzen 7 5800X3D review on the OC3D Forums.

KingNosser
It's a split between them in different ways but in production very different.

I'm only intrested in gaming myself, see on toms hardware they had a review up but between the 5800x vs 5800x3d even in 1440p their was a noticable difference some larger than others but generally 5% overall.

My main intrest in the 5800x3d is it's performance in RSR as i'd be upscaling from 1080p in that case this chip might have a little magic in that aspect, but still only in certain games but it's something i'm intrested in knowing about as a deciding factor.

I said a while ago and still feel this this chip is a test bed of things to come and i doubt they will be as mass produced as other chips, saying that it could turn out as the best chip the AM4 platform will get least in terms of gaming it's just the price that will either be a turn on or run away like hell LULQuote

AngryGoldfish
It's possible this particular chip will compete with Zen 4 in gaming. The 5800X3D could become a swansong for AM4 that keeps many gamers tied to the platform quite happily. It may not sell a ton out of the gate, but it could sell consistently well over the next few years.Quote

KingNosser
I feel it's a little overpriced so if able i'll pick up a 5900x i just don't feel it's worth the extra myself, still not long till i know for sure

It's a decent chip thou but it's situational and so that is my main issue.Quote

The 12900KF beats it overall in gaming and it has pretty hard caveats.

I mean yeah the 12900KF is like double the price but reviews don't overclock the true competition, that being the 12700KF which is cheaper. At which point there will be little in it.

The caveats hurt it quite badly too. IE because of the cache sandwich temps are not good, and it's clock restricted and thus in anything else but gaming it's slow. It gets pummeled by the 12700KF. It's also 300mhz or so slower than the 5800X and totally locked down for overclocking because of said cache.

The only way I have ever killed a CPU stone dead was by killing the cache, and it's super fragile in this CPU meaning overclocks are literally locked out.

I think Anthony on LTT said it best with "if you don't overclock at all then it may be a good upgrade to an earlier gen Ryzen, but not worth considering for a new build".Quote

Dicehunter
From everything I've seen so far it wins about half the time against a 12900K and loses the other half in games BUT considering it's price it's a damn nice chip.Quote
Reply