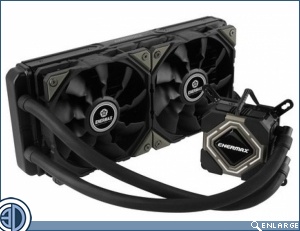 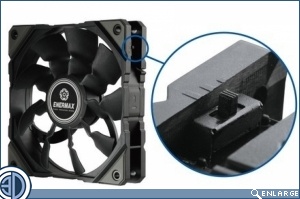 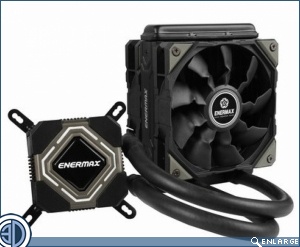 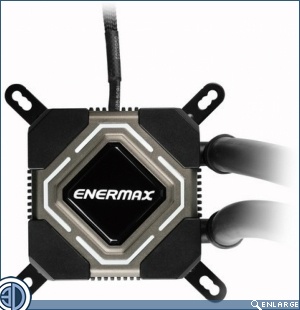 Both LIQMAX II 120S and 240 include two 2nd generation batwing fans equipped with ENERMAX's patented smart APS control. The new batwing blades design not only provides +20-30% more airflow than conventional blades, but also creates continuous burst air. This creates powerful air pressure that will penetrate the radiators to dissipate heat instantly. In addition, ENERMAX's patented APS control on the fan frame allows users to adjust their preferred speed setting without uninstalling the fans: 500-1200/1600/2000 RPM. Anti-vibration rubber pads are added on the corners of the fan to eliminate the operation vibration and noise.

LIQMAX II offers certain features which make the experience more intuitive and delightful. The durable rubber tube on the LIQMAX II is elastic and features zero permeability. The LED logo on the cooling block indicates power status. LIQMAX II offers pressure adjustment spring screws to ensure a perfect contact force between the cooling block and CPU without damaging the CPU. The Dow Corning TC-5121 thermal conductivity grease that is included is highly recommended by professional users and media.

LIQMAX II will be available in mid-December worldwide. Price and availability may vary based on regions. Please consult your local ENERMAX representative for more information.

Dicehunter
Nice find, Although all these AIO's are starting to look and perform the same.

I wish they would just start copying Swiftech, Having a pump on top of the CPU block is not a good idea for thermals.
Swiftech have their res attached separately to their rad and their pump mounted to their res with the CPU block getting no extra heat from the pump.Quote

Greenback
I'd bet swiftech have patented that so no 1 can take it. It would be nice if you could get the swiftech 1 in the ukQuote

barnsley
Antec also do a pump on rad AIO.Quote