What do you think of Coffee Lake's leaked pricing?

EU pricing for Intel's upcoming Coffee Lake series CPUs has leaked on Guru3D, revealing prices that are higher than their existing Kaby Lake-S counterparts but with increased core counts.

At this time these prices have not been confirmed by Intel, so the usual grain of salt is required, though they do seem very close to what many consumers are expecting given the pricing of AMD's Ryzen lineup and the core counts/clock speeds that Intel offer. 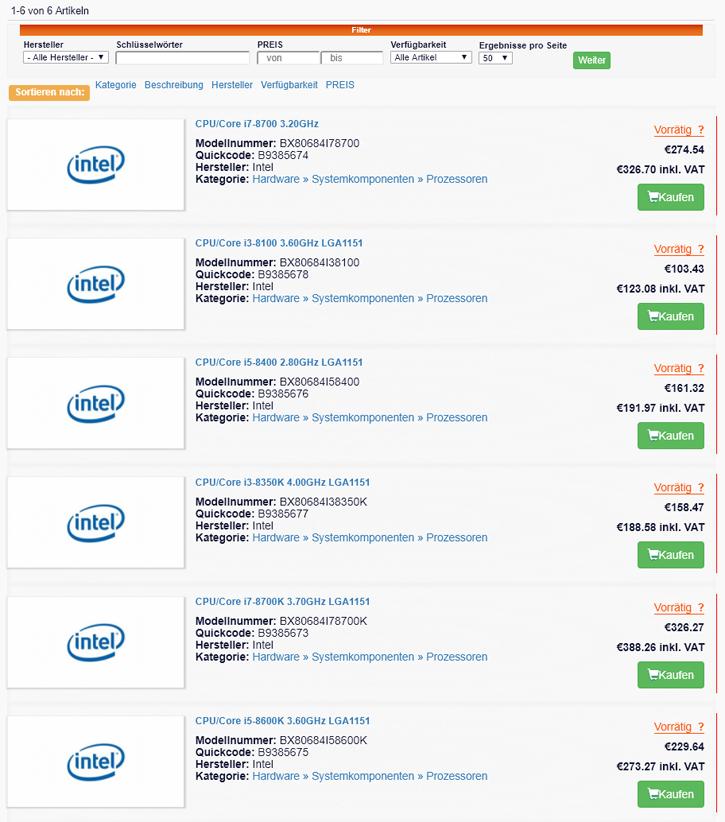 If these prices are legitimate it places Intel's Coffee lake CPUs in a very interesting position, with AMD offering more cores at most price-points while Intel offers higher single core and multicore boost clock speeds and single-threaded performance.

It looks like Coffee Lake will be the most competitive architecture that Intel has released for several CPU generations, provided that the Z370 platform cost is similar to Z270 and this early pricing info is correct.

You can join the discussion on Intel's Coffee Lake CPUs on the OC3D Forums.

AlienALX
So basically twice the price of the 1600? wow. I mean yeah I know they will be faster but man, double the price?Quote

AngryGoldfish
€390 for the 8700K is not terrible, but I see no excuse to not charge the €330 of the 7700K. We've had high clocking six core CPU's for years now. They can't be that hard to produce and engineer.Quote

AlienALX
Quote:
I still think Intel have missed the Ryzen memo. If you calculate the price VS cores this costs the same or more than the 7700K. So they haven't dropped the price at all.Quote