Today is a big day for AMD, as they have just launched the "world’s highest-performing server processor". AMD's 3rd Generation EPYC processors are here, and they are delivering enterprise customers more performance, new features and drop-in compatibility with existing Zen 2-powered servers.

Thanks to their Zen 3 architecture and a revamped I/O die, AMD's 3rd Generation EPYC processors can deliver large leaps in raw performance, tighten their security mechanisms and provide their customers with increased versatility. AMD's 3rd Generation is more than a mere Zen 3 refresh of 2nd Gen EPYC; it is an upgrade that pushes AMD forward on almost all fronts.

Over the next few pages, we will be discussing AMD's 3rd Generation EPYC processors in detail. Get ready to meet the EPYC 7003 series.

Let's face it; Intel's execution within the data centre market has been poor for several years. Intel has been stuck on 14nm for too long, and Intel's Skylake and Cascade Lake architectures are in dire need of replacement.

AMD's pre-briefing on 3rd Generation EPYC discusses AMD's "Predictable Execution" and the fact that AMD is "making good on our promises". Intel's enterprise delays have hit their reputation hard, and AMD is more than willing to take advantage of that.

Intel's ageing Cascade Lake lineup is also granting AMD a huge performance lead. Ice Lake is not available yet, which means that AMD's Zen 3 enterprise lineup is still being compared to Cascade Lake, and these comparisons are not doing Intel any favours. Intel's inability to execute is handing AMD free market share. 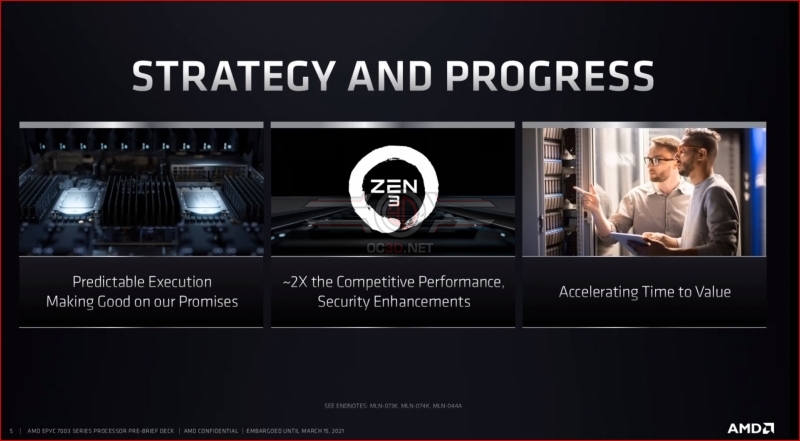 If you have read our Ryzen 5000 series reviews, you will know that Zen 3 is a great CPU architecture. With EPYC, AMD promises the same 19% IPC uplift over Zen 2, delivering 3rd Generation EPYC users a solid uplift in system performance.

AMD's 19% IPC uplift is a geomean from various workloads, which means that Zen 3 can deliver larger and smaller performance boosts depending on your specific workload. Even so, a 19% average is an excellent improvement, so much so that Zen 3 deliver AMD's highest generation-to-generation IPC uplift for their Zen family of processors. 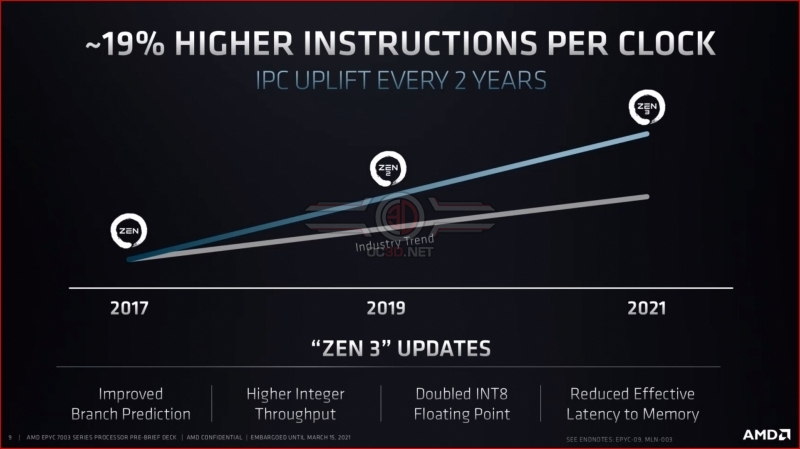 AMD's Zen 3 architecture makes improvements across its core architecture. No single change is responsible for AMD's 19% IPC boost. With Zen 3, many small improvements have added up to create a large overall IPC improvement. This allows Zen 3 to deliver boosted performance across a wide range of workloads and for these performance improvements to be substantial in many cases. 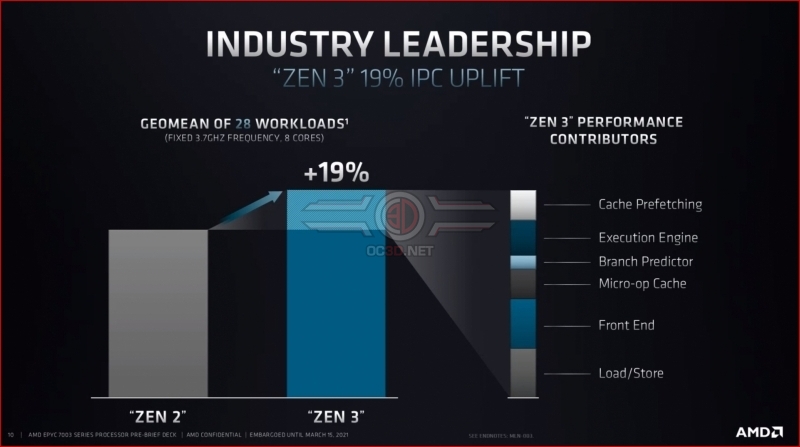 The slide below goes into some of the nitty-gritty details of Zen 3, but the shorthand is that AMD has made its branch prediction less latent, more accurate, and better at handling its mistakes, the core's L1 cache has been doubled in size, the core's load/store functionality has been made more flexible/less fixed function, and several sections of its execution pathways have been widened. 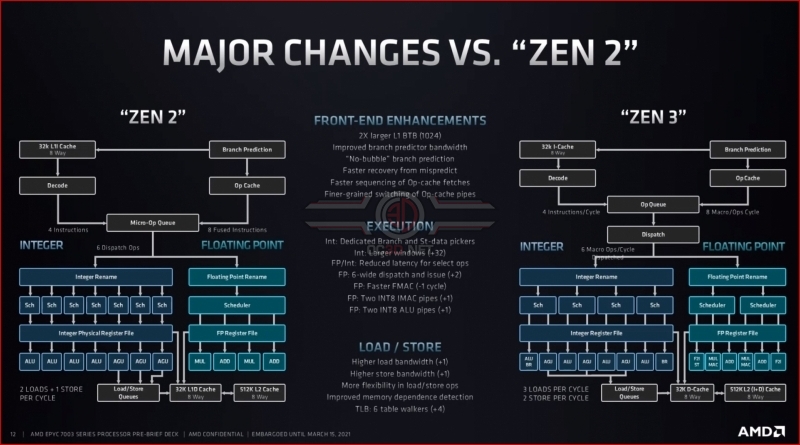 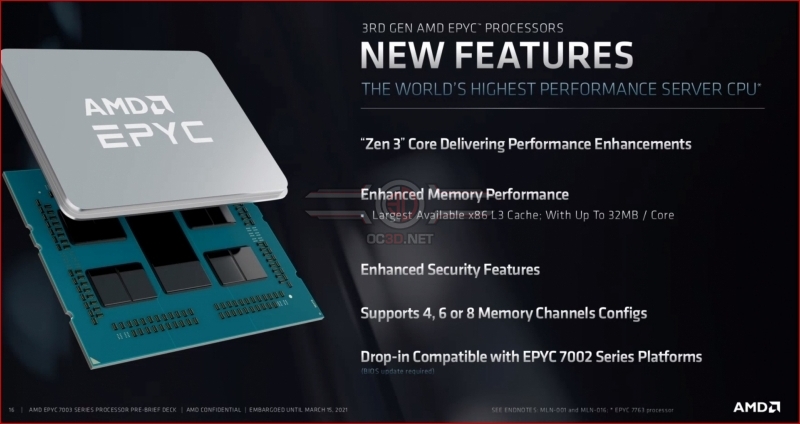 With Zen 2, these core complexes featured 16MB of cache each, offering 32MB of combined cache across the 8-core CPU die. One of Zen 3's major innovation is the architecture's use of 8-core CPU complexes, making the eight CPU cores within a Zen 3 CPU die a singular core cluster with a single combined L3 cache.

With Zen 3, all eight cores can communicate without a latency penalty, and each core now has access to a combined 32MB pool of L3 cache. This allows for faster core-to-core communications within a single CPU core complex (CCX), while giving each core access to more L3 cache.

While Zen 3 allows cores to access 2x as much L3 cache, the reality is that AMD has managed an even more impressive feat. With a single combined L3 cache, each CPU die no longer needs to dedicate parts of each separate L3 cache to the same data. With Zen 3's combined cache structure, AMD can more than double each core's cache access by eliminating the need for duplicate data. 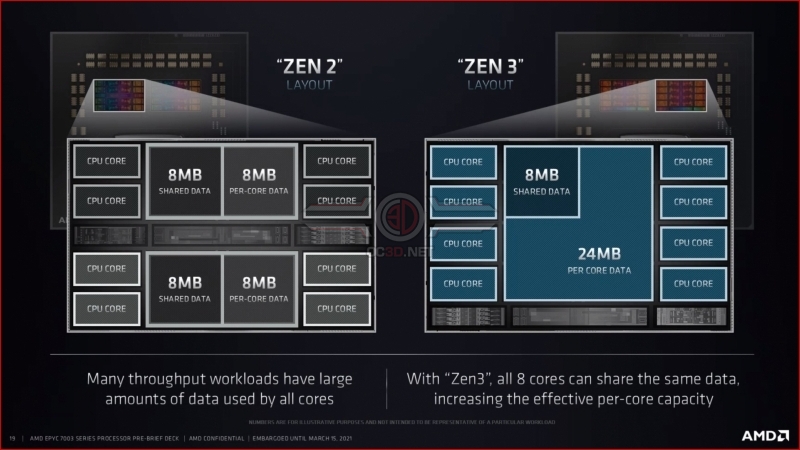 Please load onto the next page