Everything you need to know about the Ryzen 9 3950X

The AM4 CPU that challenges X299

Everything you need to know about the Ryzen 9 3950X

When AMD launched its first Zen processors, it brought eight-core processors into the mainstream. AM4 offered customers core counts that were higher than what Intel could muster on its desktop sockets, and with AMD's Ryzen 3rd Generation lineup, AMD took things another step further.

AMD launched its Ryzen 3rd Generation lineup with six-core, eight-core and 12-core offerings, but since Computex 2019, AMD has teased something bigger, a 16-core flagship that will double the AM4's maximum core count over AMD's Ryzen 2nd Gen products. Now, the Ryzen 9 3950X is ready for release, launching alongside their Ryzen Threadripper 3rd Generation products to deliver stellar performance to those that need high core count processors.

On November 25th, AMD's Ryzen 3950X processor will release onto the desktop CPU market, offering the highest single-threaded performance of AMD's Ryzen 3rd Generation lineup and the largest core/thread count on AM4. While this CPU ships with an incredibly high price at $749, it is due to deliver buyers a great price/performance when compared to last-generation offerings from both AMD and Intel. 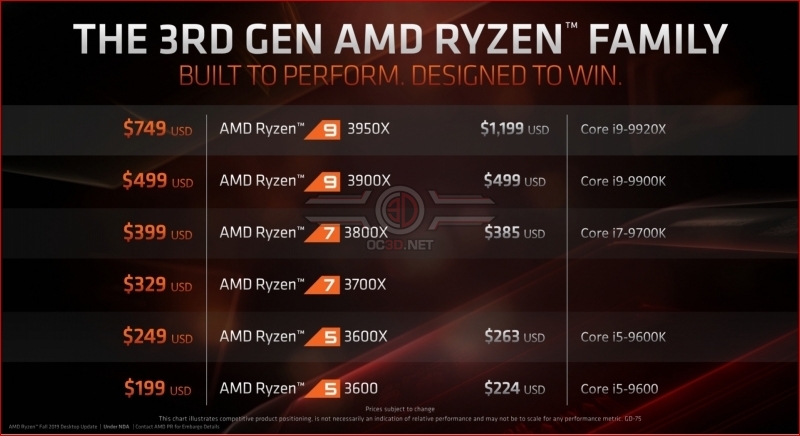 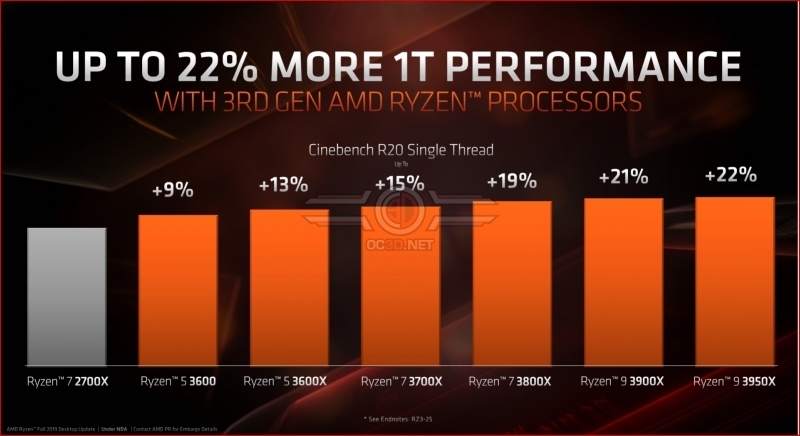 When it comes to gaming, AMD promises performance levels that are competitive with Intel's i9-9900K, and greater than Intel's 9th Generation X299 offerings, offering a unique balance between gaming performance and HEDT performance. 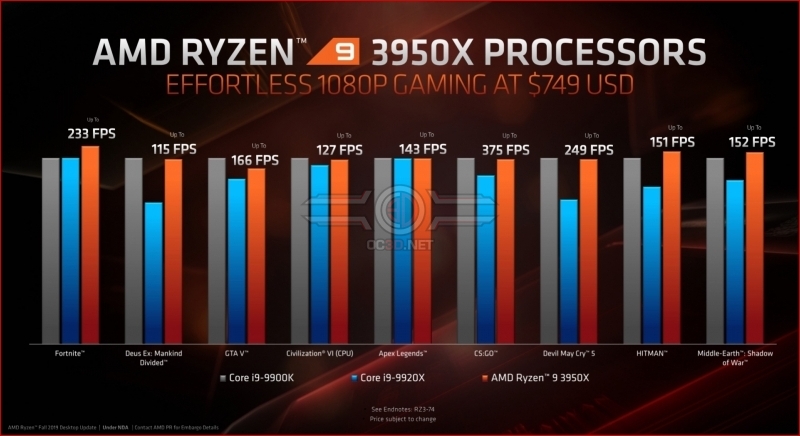 AMD's Ryzen 9 3950X processor is aimed at creators, those who can put sixteen strong cores to work. On AM4, AMD hopes to compete favourably with Intel's X299 processor platform, delivering excellent performance in creative workloads while maintaining the affordability that AMD's mainstream desktop platform provides. 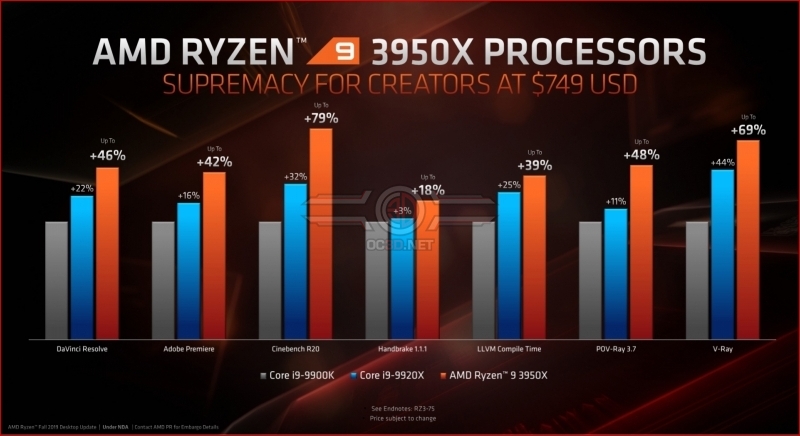 With the Ryzen 9 3950X, AMD claims the power efficiency crown, claiming a 2.34X performance per watt advantage over Intel when measuring power from the wall. This comes thanks to AMD's 7nm manufacturing and AMD's efficient Zen 2 core architecture. However, it is worth noting that this data comes from AMD and uses an application that's known to perform well on AMD processors and scale well with core counts. 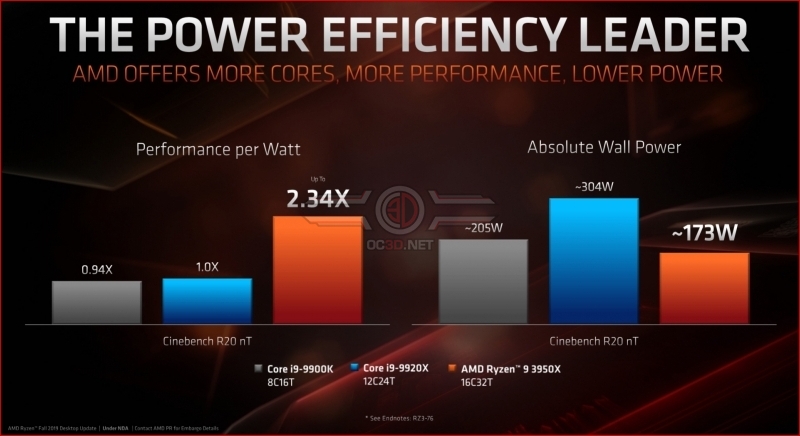 Unlike other AM4 processors, AMD's Ryzen 9 3950X doesn't ship with a stock cooler. AMD expects users of its Ryzen 9 3950X processor to purchase a liquid cooler, recommending 280mm units or larger. AMD plans to recommend a list of Closed-loop liquid-coolers (CLCs) for their Ryzen 9 3950X in the near future, which should allow purchasers to know what kind of cooling this CPU requires. 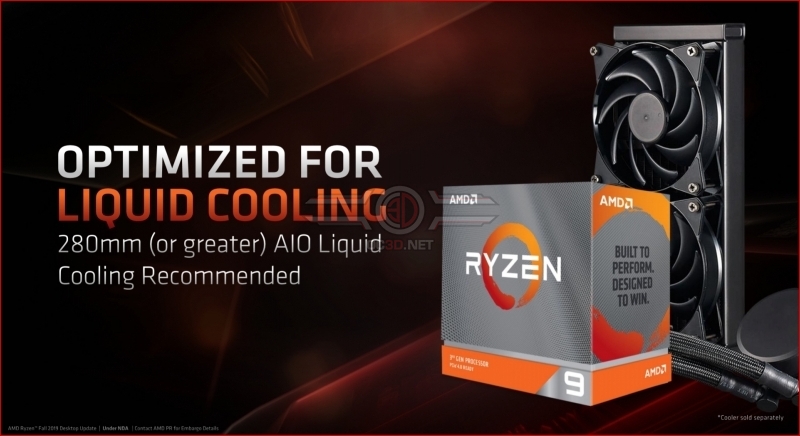 With AMD's Ryzen 9 3950X, AMD promises up t 1 44% power reduction while maintaining 77% of their processor's CPU performance. Not bad AMD, not bad. 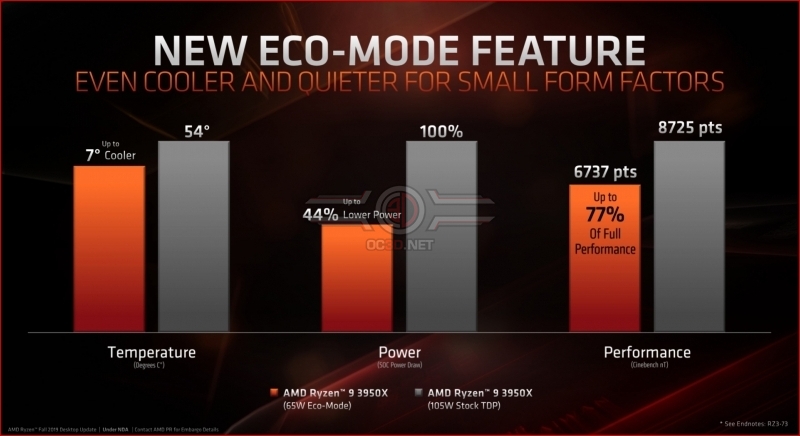 You can join the discussion on AMD's Ryzen 9 3950X processor on the OC3D Forums.