Over on Weibo, the full specifications of Intel's 11th Generation Rocket Lake processors have leaked onto the web, revealing 10 models across the company's i9 and i7 product lines.

These new i7 and i9 processors feature eight cores and sixteen threads, leaving very little to distinguish Intel's i7 and i9 series processors from each other. The only major differences are higher core clock speeds for i9 models and support for Intel's Thermal Velocity Boost on all i9 models except for the low power i9-11900T.

Sadly the specifications for Intel's 11th Generation i5 and i3 processors remain unknown, though it is likely that Intel's new i5 products will feature six cores and twelve threads while Intel;'s i3 models will feature four cores and eight threads.

Compared to their last-generation i9-10900K processor, Intel's i9-11900K is said to be between 8% and 14% faster in CPU-limited gaming workloads. While a welcome improvement, this change will not be enough to make most 10th Generation Intel users consider upgrading, even if they are huge Microsoft Flight Simulator fans.

If Intel's leaks specifications sheet is legitimate, the i9-11900K will feature the same TDP as the company's i9-10900K, despite featuring two fewer CPU cores. 125W is a high TDP for a modern desktop-grade processor and is a factor that should give AMD an overall power efficiency advantage. 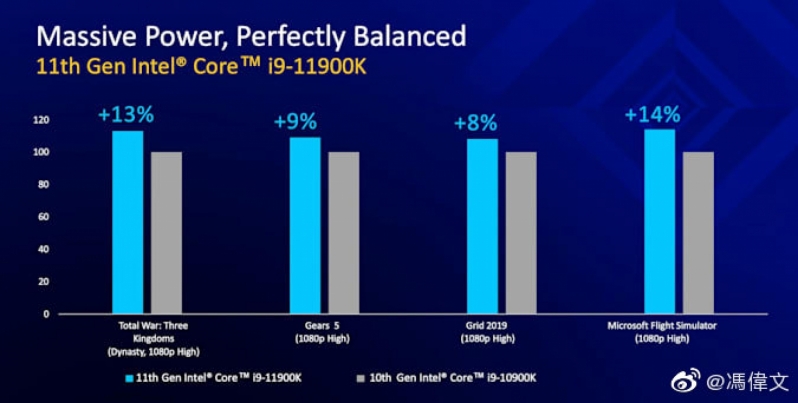 According to Intel's official i9-11900K gaming benchmarks from CES 2021, Intel has claimed the gaming crown from AMD, albeit by small percentage points. This shift is not enough to get AMD users to consider an upgrade to an Intel platform, especially if they plan to utilise the higher core counts of AMD processors for workstation applications. 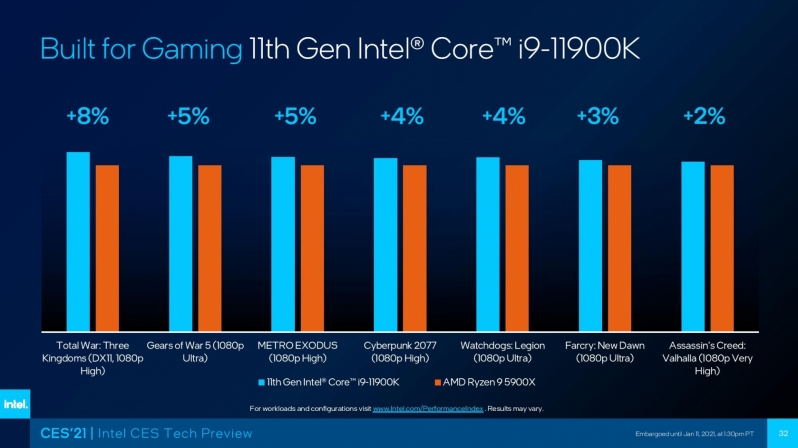 Based on these leaked Intel benchmarks and specifications sheets, Intel's i7-11700K will offer Intel users more value than their i9-11900K, which should only by 4-6% faster in terms of clock speeds. Intel's gaming performance will see notable improvements over Comet Lake, though these gains are relatively small and are far from the gaming breakthrough that Intel needs to put AMD on the backfoot.

You can join the discussion on Intel's 11th Gen Rocket Lake CPU performance and specifications leaks on the OC3D Forums.

AngryGoldfish
This is both a good and bad time for Intel. They're marketing this CPU to gamers, but gamers can't build new systems right now. Ryzen parts are difficult to find, but mainly the 'non-gaming' parts. You can find the 5600X and 5800X. If AMD were struggling to supply all Zen 3 CPUs and the GPU crises wasn't a problem, Intel could sell a lot of these chips to gamers.Quote

AngryGoldfish
Quote:
I think the angle with these is: pure single-threaded performance with ample supply. For a gamer right now, if they have a GPU and need a new CPU, I'd definitely say go Intel.Quote

Dawelio
Quote:
Lets not forget about the motherboard that is needed for that new CPU! :PQuote