For G.Skill, the world's highest memory frequencies have been achieved, with the overclocker hocayu achieving 8704 MT/s on his Trident Z5 memory modules using an Intel i7-12700KF processor.

For ASUS, several new world records have been achieved by the Swedish Overclocker Elmor, who has achieved world record PiFast performance and Alder Lake's highest all-P-core frequency. These records are detailed in the image below, which was provided by ASUS.

These records showcase the performance of Intel's latest CPU platform, though it is worth noting that it is still early days for Alder Lake and DDR5. These records will likely be broken soon, especially as overclockers find and test higher quality Alder Lake silicon. Even so, today is a good day for G.Skill and ASUS.

Below we have included G.Skill's Press Release for their DDR5 memory kits reaching 8704 MT/s. You can read our full review for Intel's i9-12900K and i5-12600K processors here. 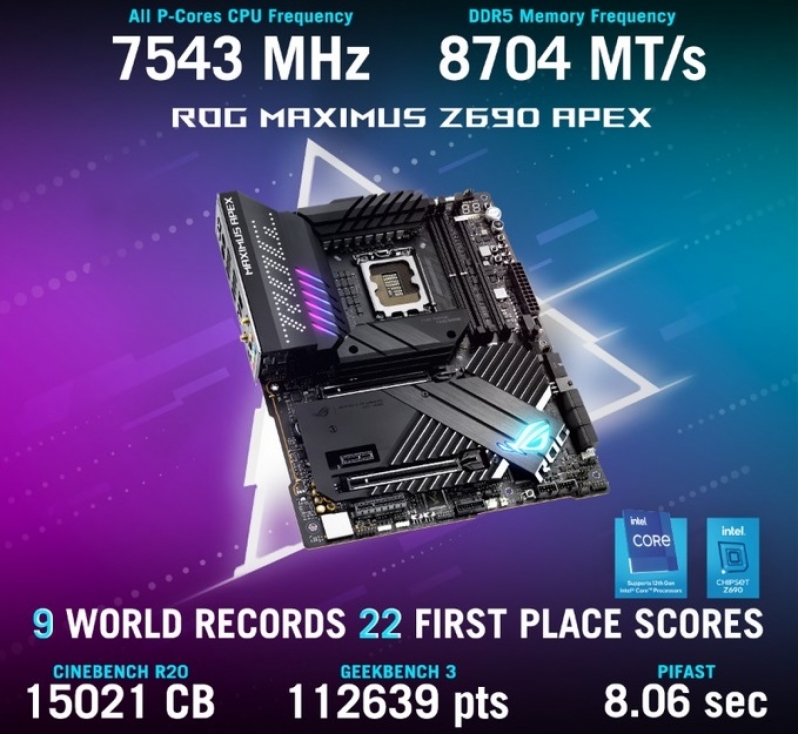 G.SKILL International Enterprise Co., Ltd., the world's leading manufacturer of extreme performance memory and gaming peripherals, is excited to claim yet another world record, in close partnership with the ASUS ROG motherboard team, for the fastest memory frequency of an incredible DDR5-8704. This incredible feat was achieved with the G.SKILL Trident Z5 DDR5 memory on the latest Intel Core i7-12700KF processor and ASUS ROG Maximus Z690 APEX motherboard.

Laying claim to the world record for the fastest memory frequency with the latest DDR5 memory, G.SKILL and ASUS worked closely together to achieve an incredible DDR5-8704, using liquid nitrogen to cool the system to subzero temperatures. Solidifying DDR5 memory as the new extreme performance standard, this memory frequency world record was achieved with the new Trident Z5 RGB memory on the ASUS ROG Maximus Z690 APEX motherboard. See below for a screenshot of the world record, achieved by the extreme overclocker "hocayu":

To witness the extreme overclocking in action, watch the video below.

For more information on this new memory frequency world record, please visit the submission on CPU-Z at this page.

You can join the discussion on ASUS and G.Skill's Alder Lake and DDR5 overclocking records on the OC3D Forums.