Will it be long before overclockers break past 9,000 MT/s?

"lupin_no_musume" achieved this 8,888 MT/s overclock using CL timings of 88-88-88-88, delivering extreme levels of performance using liquid nitrogen cooling. This is impressive given how new the DDR5 memory standard is, though higher world record overclocking speeds are likely to be achieved within the next few months as DDR5 memory production matures.

In time, some DDR5 memory modules are expected to offer users speeds of over 8,000 MT/s out of the box, after which overclocking records will likely surpass 10,000 MT/s. Just like DDR4 speeds, DDR5 frequencies are expected to increase dramatically over time, especially as CPU memory controllers improve and DDR5 manufacturing processes become more refined. In the early days of DDR4, 2400MT/s and 2666 MT/s speeds were common, with 3600MT/s and faster modules becoming more common as the industry reached the end of DDR4's lifespan.

While today's world record DDR5 memory speeds are impressive, it is only a matter of time before this record is broken, and it is probable that consumer-grade modules will offer PC enthusiasts faster memory speeds out of the box within a few years.

Below is G.Skill's press release on DDR5's new overclocking record. 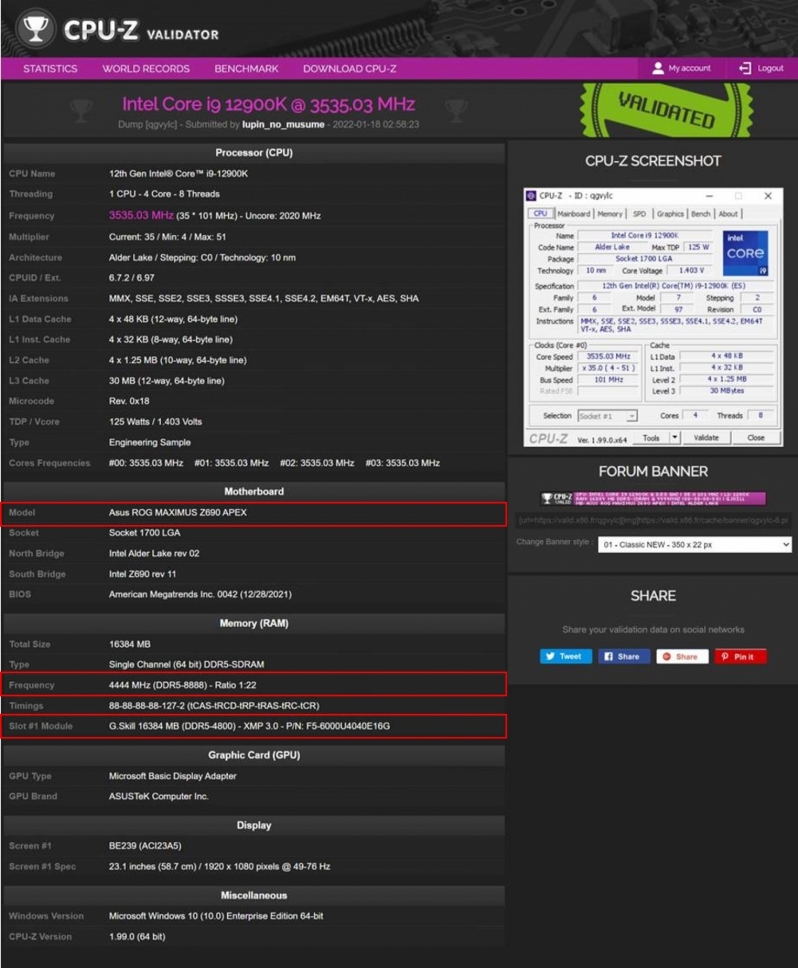 At the dawn of the DDR5 era, G.SKILL and ASUS have been constantly exploring the memory speed limitations of the latest Intel Z690 platform. Surpassing the previous DDR5-8704 world record in November 2021, a new memory frequency world record is achieved at DDR5-8888 under liquid nitrogen extreme cooling. The memory speed has been validated by CPU-Z. Please refer to the screenshot and validation link below: https://valid.x86.fr/qgvylc

"We are very excited to collaborate with the ASUS ROG team to break the DDR5 frequency world record at DDR5-8888 with our best-in-class hardware," says Tequila Huang, Corporate Vice President of G.SKILL International. "This demonstrates the unparalleled overclocking potential of DDR5, and we will continue to dedicate effort into developing faster DDR5 memory for overclockers and PC enthusiasts."

You can join the discussion on G.Skill and ASUS setting a new DDR5 overclocking record on the OC3D Forums.