Up to 20-phase digital VRMs with 100 amp phases. Total Insanity!

Gigabyte has issued a press release to detail their new Z590 AORUS motherboards, confirming that they are designed to support Intel's 11th Generation of Core Processors, which have long been rumoured to be called Rocket Lake.

With Z590, Intel's finally going to deliver PCIe 4.0 support on its mainstream desktop motherboard platforms, enabling high-speed connectivity for the latest SSDs, graphics cards and other devices. Gigabyte will be supplementing these changes with their own suite of design improvements, offering their users new software and hardware solutions to enable increased stability, overclockability and cooling performance.

With PCIe 4.0 support, users can enjoy the high bandwidth, the ultra-high transfer speed, and improved CPU performance on Intel platform. GIGABYTE Z590 AORUS motherboards use PCIe 4.0 grade PCBs, PCIe slots, M.2 slots, and controllers for the highest bandwidth quality, which enabling speeds up to 7000 MB/s. Z590 AORUS motherboards equip up to three PCIe 4.0 M.2 slots with direct connection to the CPU for the highest bandwidth possible. RAID configurations are possible and they could provide access rate of more than 20000 MB/s. GIGABYTE’s patent, Thermal Guard II, is a double sided heat dissipation solution that provides optimal cooling to the PCIe 4.0 M.2 SSD modules to prevent thermal throttling under high-speed operation.

GIGABYTE Z590 AORUS motherboards pack features such as the advanced power design which can deliver up to 2100 Amps and provide the best power balance, with up to 20+1 phases which each of them can hold up to 100 amps with its DrMOS power stages design. The diverse power designs can unleash the extreme overclocking performance and unlock the full potential of the new processors. Furthermore, the addition of Tantalum Polymer capacitors improves the transient response of the VRM between high and low loads, increasing the stability and purity of the processor so that users won’t have to worry about overlocking failures caused by unstable power. 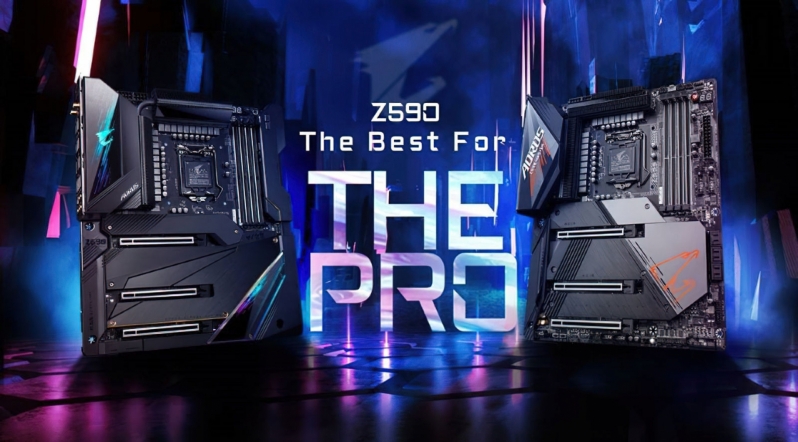 For cooling, Gigabyte has stated that they have redesigned the fin stacks of their Z590 AORUS motherboards to enable increased heat dissipation, offering users more surface area for cooling thanks to reshaped fins, direct touch heatpipes for faster hat transfers and improved thermal pads which deliver up to 4x more heat dissipation than traditional thermal pads.

GIGABYTE Z590 AORUS motherboards are designed with a renewed focus on heat dissipation. The Fins-Array II design features a redesigned stacked fin heatsink which enlarges the surface area up to 3 times compared to traditional heatsinks and it introduces newly reshaped fins that allow for superior heat dissipation. Direct-Touch Heatpipe II design features a larger, 8mm direct touch heatpipe with shortened distance and increased contact area between the heatpipe and heatsink to speed up heat transfer from the VRM to the heatsink, lowering the temperatures significantly.

Aside from power and thermal management, GIGABYTE Z590 AORUS motherboards boast an impressive memory configuration with support for single-slot 32GB memory capacity. The memory circuits are embedded within the PCB ground layers while the metal outer layer of the PCB reduces electromagnetic interference so those using dual channel configuration can enjoy high-speed, stable overclocked RAM performance boost above XMP 5000MHz. GIGABYTE Z590 AORUS XTREME features the exclusive SMT Memory DIMM design which utilizes surface adhesion welding technology so that the solder joints of the memory slots are smoothly fixed onto the PCB. This reduces signal interference between the open fiber cloths of the PCB and the memory wiring. The signal stabilizing function of the tantalum Polymer capacitors at the base of the memory slots further enhance the stability of the board especially when overclocking at XMP high frequencies.

Gigabyte has invested in USB4, USB 3.2 Gen2x2 and both 2.5Gb 10Gb Ethernet on their AORUS series motherboards for connectivity. Thunderbolt 4 should also be possible with the right add-ons, a standard that is backwards compatible with Thunderbolt 3. WiFi 6E is also on the radar with Intel's Z590 platform, highlighting Intel's focus on platform features, many of which are not present on most of AMD's competing X570 designs.

GIGABYTE Z590 AORUS motherboards are equipped with the latest technologies from all the aspects. USB4, 3.2 Gen2x2, 3.2 Gen2 slots, 2.5G and 10G Ethernet, audio jacks, and Thunderbolt 4 expansion interface are some of them. The Intel® 2.5Gbps Ethernet controller brings ultra-fast connectivity that is 2.5 faster than Gigabit Ethernet. Also, the lineup implements an Intel® WiFi 6E 802.11ax network adapter with new exclusive 6GHz frequency band to lessen surrounding Electromagnetic Interference and to provide Gigabit level wireless network. The latest AORUS triple-band (2.4GHz/5GHz/6GHz) high-gain WiFi smart antenna can deliver up to 2.4Gbps transmission speed which offers smoother steaming videos, gaming performance, and more stability. The addition of QFLASH and Clear CMOS buttons makes it much easier and more convenient for users to troubleshoot their systems or update their BIOS without installing a processor.

User customization is where the GIGABYTE Z590 motherboards thrive. The redesigned Smart Fan 6, the multiple temperature sensors, Hybrid fan design, noise detection, and increased fan control points from 5 to 7 and more give users the absolute system control and customization.. Users can now switch quickly between Slope mode and Stair mode by their demands. Slope mode is the traditional linear fan speed curve, and Stair mode is a newly introduced mode to maintain the same fan speed within a specified interval which can avoid the annoying noise from the sudden speed-up or down of the fan RPM. EZ Tuning features the friendly adjustment and advanced manual setting mode, which enabling users to control the system temperature setting for the optimal balance among silent, cool, and high performance.

When it comes to audio, GIGABYTE is always on top of the game. The top of GIGABYTE Z590 lineup utilizes a high SNR audio engine and pairs it with the WIMA FKP2 studio-grade audio capacitors to deliver studio-grade and high-fidelity audio. The GIGABYTE exclusive audio design integrates ESS SABRE DAC as well as DTS?X® Ultra to deliver high fidelity audio for the most immersive sound experience whether it’s for gaming or watching movies/listening to music. The flagship Z590 AORUS XTREME motherboard introduces the ESSential USB DAC, a USB Type C interface with built-in ESS SABRE HiFi ES9280C PRO.

Moreover, GIGABYTE Z590 AORUS motherboards support technologies such as LED lighting and Q-Flash Plus which allow users to flash a BIOS file without installing a CPU, RAM, GPU, and other peripherals. GIGABYTE BIOS has been completely revamped with a new graphical interface that displays key information such as clock speeds, memory, storage devices, fan statuses/settings, and other important hardware information in a more intuitive and user friendly manner.

You can join the discussion on Gigabyte's Z590 AORUS motherboards for Intel's 11th Generation Core Processors on the OC3D Forums.

Dawelio
Is it just me or has AORUS really stepped up their game the past years? Their designs are beating ASUS etc, in my personal opinion. The left one on the picture is just so nice looking.Quote

Warchild
Quote:
They hit it well with the Aorus series from the start. I just never liked the orange lighting. Design wise they are more aethetically pleasing than ROG for me.

I think that could be why the new Glacial from Asus is leaning more towards Gigabytes style of design.Quote
Reply