High profile overclockers are throwing a lot of shade at Gigabyte

Gigabyte has been advertising the overclocking potential of their new Z690 AORUS TACHYON motherboard, stating that their board was able to achieve an 8,000 MHz CPU overclock and an 8,300 MHz DDR5 memory with Intel's new Alder Lake series processors. The problem is that well-respected overclockers are calling their 8GHz overclock "fake".

Both Roman "der8auer" Harting, hardcore overclocker and CEO of HWBot, and the creator of CPU-Z, Doc TB, have called Gigabyte's 8GHz overclock illegitimate. In his video on the subject, which is at the base of this article, der8auer called Gigabyte's promotion of the result "very disrespectful" to the overclocking community, the very community that the Z690 AORUS TACHYON is marketed towards.

Intel's Alder Lake series CPUs has a bug that can cause issues when CPU ratios of over 63 are used. This resulted in "many 8/9/1-/12+ GHz" fake overclocks on CPU-Z. Intel had addressed the issue with their latest microcode and firmware revisions, but some overclockers reportedly have access to BIOS source code, allowing them to exploit Intel's PLL lock bug with enough effort.

Sadly, these exploits are undetectable by CPU-Z, the tools that are used to validate world record overclocks. This allows "fake" overclocking results to be created, presumably resulting in Gigabyte's so-called "fake" 8GHz Alder Lake overclock.

Overclockers are frustrated with Gigabyte for their promotion of this 8GHz overclock. At the time of writing, this overclock is still advertised on Gigabyte's webpage for their Z690 AORUS TACHYON motherboard. Beyond that, the company has issued a press release that discusses the 8GHz overclock. What Gigabyte's claiming as a return to "overclocking glory" has been called fake news by overclocking experts. 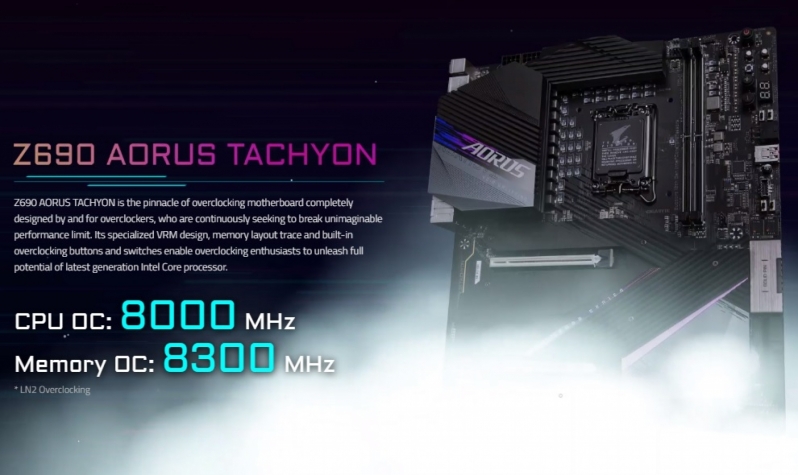 If nothing else, Gigabyte's 8GHz overclock is suspicious, as no other Alder Lake overclocker has managed to get close to 8GHz with Alder Lake. Beyond that, hitting exactly 8GHz is too perfect, as enthusiast overclockers are often fighting for every extra MHz, making exact GHz numbers improbable.

Most high profile overclockers test a large number of processors to judge their overclocking potential. From there, they use the best chips to attempt world record overclocks. For Alder Lake, overclocks of around 7.5 GHz or 7.6 GHz are common within the LN2 overclocking scene, but 8GHz is unheard of outside of bugged/fake results.

At the end of his video, der8auer has stated that he and the HWBot team will be looking into this situation further. His video is available below for those who want to watch it. 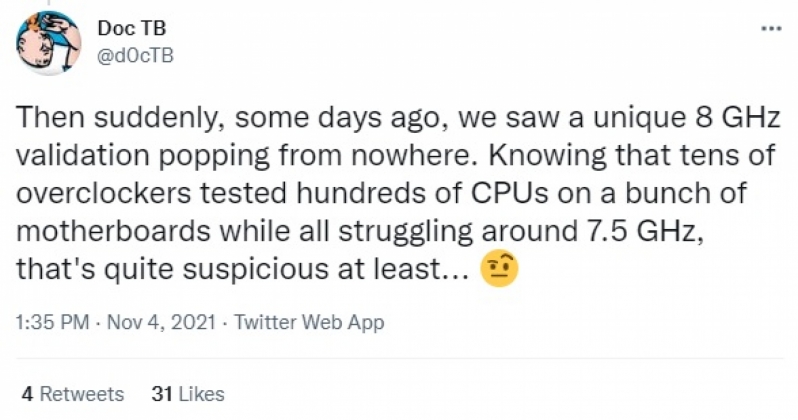 At this time, Gigabyte has not publically commented on the criticisms it has received from high profile overclockers. Gigabyte has not retracted any of its 8GHz marketing or commented anywhere to stand by its alleged 8GHz overclocking achievement. Either way, this situation won't matter to the vast majority of PC builders, most of whom are not part of the extreme overclocking scene or would risk their hardware by pushing it to insane degrees.

You can join the discussion on Gigabyte's 8GHz overclocking claims getting questioned by overclockers on the OC3D Forums.

Still that might not even be possible on LN2, but i'd never buy there kit anyways.Quote

dazbobaby
I used to love Gigabyte mobo's, but that was a long time ago.
Now it seems they can't get one damn thing right.


It's just one monumental -up after another.Quote

AlienALX
Funny part is they are making the best boards they've made in many years. For much cheaper than their competition. I don't get why they need to pull stunts like this really.Quote
Reply