A Threadripper motherboard with 8-channel memory

Back in July, AMD revealed their Threadripper Pro lineup of processors, upgraded versions of AMD's existing Threadripper lineup which features support for 8-channel DDR4 memory and up to 128 PCIe lanes. Think of it this way, it's Threadripper, but more EPYC.

At launch, Threadripper Pro was limited to workstations from Lenovo's ThinkStation P620 product line, but this is due to change thanks to the introduction of a new WRX80 motherboard from Gigabyte.

Videocardz has managed to get hold of an image of Gigabyte's WRX80 SU8 motherboard, which features support for 8-channel memory and Ryzen Threadripper Pro processors with TDPs of up to 280W and core counts as high as 64. At this time, the pricing and release date of this motherboard remain unknown.

Below we can see a motherboard with seven PCIe 4.0 x16 lanes, dual 10Gb Ethernet connections and two M.2 slots for additional storage. We can also see space for eight DDR4 memory DIMMs, each of which operates with its own memory channel. 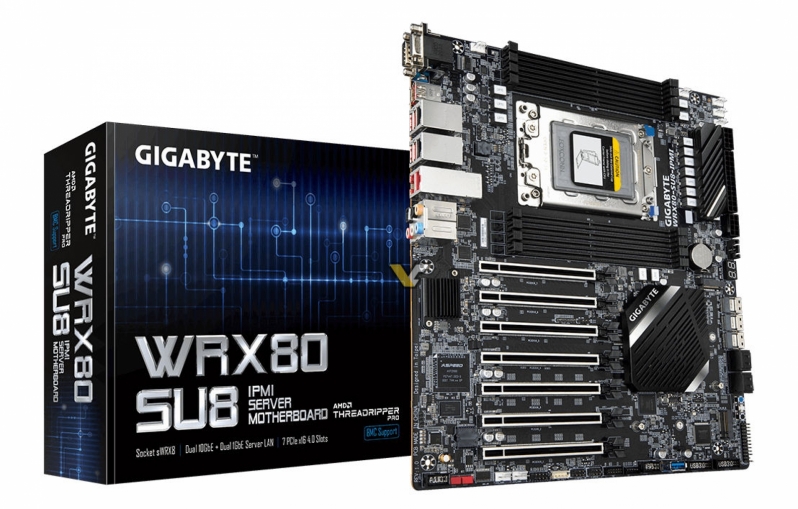 You can join the discussion on Gigabyte's Threadripper Pro WRX80 SU8 motherboard on the OC3D Forums.

MiNo
I see room for 4 M2 x slot on top of the chipset heatsink.

Mostly because I think it would be awesome with tons of super fast storage on this platform that actually have the PCIe lanes for it.Quote

Dark NighT
Quote:
Except it would interfere with any card that is long enough to go over the chipset cooling, there is no space underneath for m.2 slots and have sufficient surface area to cool that chipset.

You'd be better of just getting a pci-e card with 4 m.2 slots and it's own active cooling, since its threadripper most of those slots are directly connected to the cpu which bypasses the chipset pci-e lanes and limited bandwidth that has.Quote

Deadtroopers
No useable or relevant to us video output. No use to thee or me.Quote
Reply