Sonic Frontiers is launching tomorrow on PC and consoles

To celebrate the launch of Sonic Frontiers (which arrives on PC tomorrow), ASRock have launched their Z790 PG SONIC motherboard. This motherboard is designed to be used with Intel's new Raptor Lake processors, the company's fastest ever mainstream desktop processors.

From its box to its heatsink designs and PCBs, ASRock's PG Sonic motherboard is filled with Sonic artwork. Even this motherboard's UEFI has a Sonic theme, which is great news for long-time fans of the series.

With PCIe 5.0 support and support for Intel's new Raptor Lake series processors, ASRock's 790 PG SONIC motherboard is designed with speed in mind. PCIe 5.0 support is available on this motherboard's main PCIe x16 slot for future graphics cards and with a PCIe 5.0 M.2 slot for ultra-fast SSD storage. Networking is also faster than the norm with 2.5Gb ethernet, and fast I/O connectivity is also available though 20 Gbps USB Type-C ports.

Below is what ASRock has to say about their new Z790 PG Sonic motherboard. 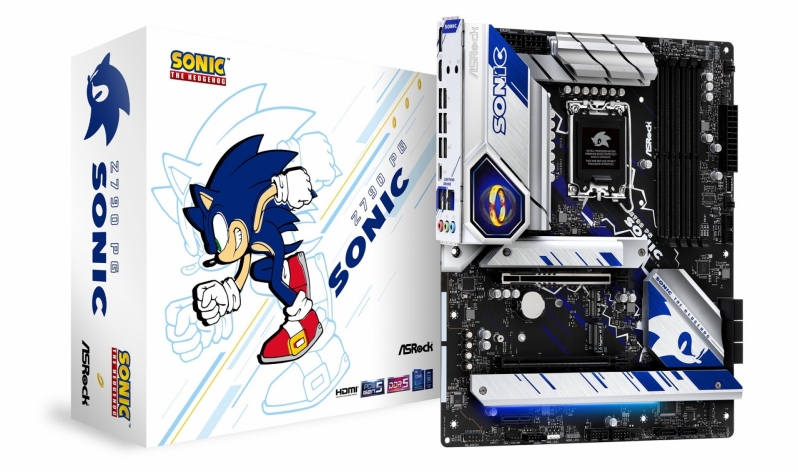 All LGA1700 processors can reach their full potential thanks to the 14+1+1 Dr.MOS VRM for CPU core and GT voltages. A generous VRM cooling heatsink, and a 2oz copper PCB underneath provides better thermal performance, even under sustained heavy load.

You can join the discussion on ASRock's official Sonic the Hedgehog 790 PG Sonic motherboard on the OC3D Forums.

Shame the PCB is black though.Quote


My favourite was always purple.
For some reason I can't help but think the legendary Gravis Ultrasound was purple, but maybe it was red.Quote

I love it too!! Blue and white/silver builds <3Quote